Intro camp: At political science, students are looking for a culinary narrative 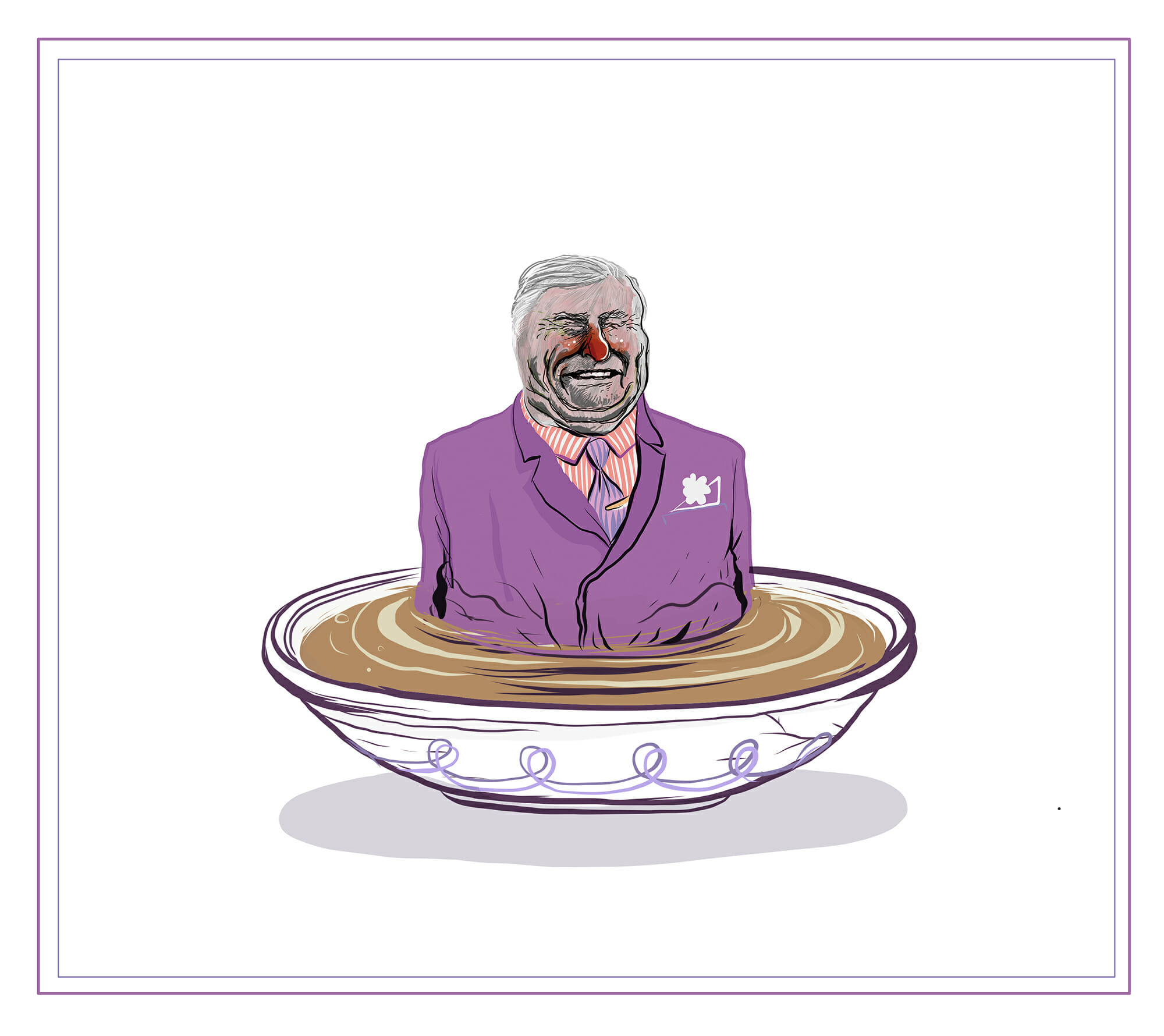 Food — You’d better get your creative (gastric) juices flowing. At least if you want to be one of the chefs at a freshers' trip for new students at the Department of Political Science. Applications for the job have to present a ‘narrative’ for a 'culinary journey' for the tutors, new students and cooks.

»We are looking for creative, quality-conscious, cooks to satisfy 450 hungry freshmen and tutors.« This is what is states in a post on the political science Facebook group ‘Statskundskab på København’, hoping to entice foodie students to apply and join the kitchen for the political science and social science intro trip for new students. The freshers trip or ‘rustur’ as they are called, are traditional, introduction weeks for new students with everything that it entails, from campus tours to binge drinking.

It’s really fun to slave away in the kitchen for four days straight and create a fantastic culinary experience.

The teams of cooks – three of them consisting of 7-9 people – are to chop, carve and fry all the meals for 450 hung over and festive freshers and be paid in the form of 10 crates of beer (per team) and, of course, an exclusive invitation to do the freshers’ trip all over again.

And it’s a job among political science students, and there are high expectations for the applicants’ level of creativity: Apart from being a »guarantee for a kitchen party« and having passed »the 1st semester mathematics test« (something that seems to be an insider-thing for political scientists), you need to present a clearcut narrative for the »culinary journey« that new students, tutors and cooks are to go on together. The applying team of cooks need to be able to set up this narrative in the application and the menu within the current budget.

»We hope to be well-entertained and have a good laugh during the reading of the applications,« says Ida Holm Sørensen on behalf of the contact committee. 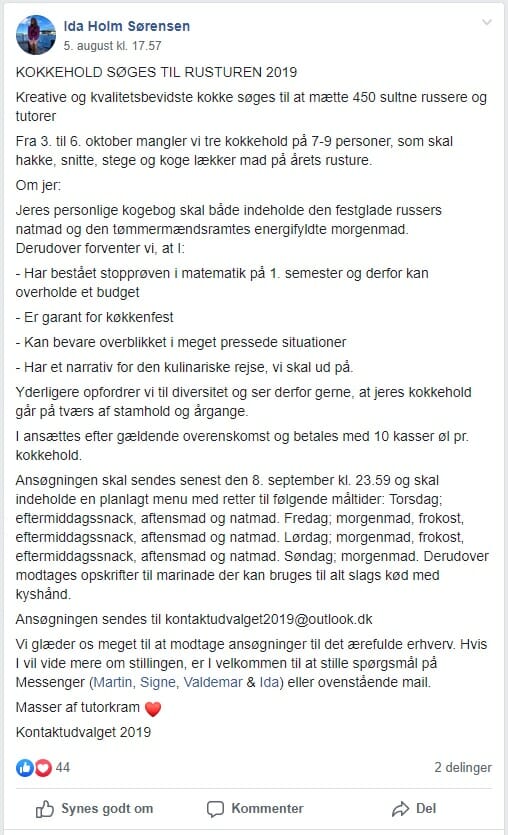 Job ad - If you want to be a chef on the intro camp, you need to write a comprehensive application.
image: Screen print

»Our impression is that students apply to be a cook because it’s really fun to slave away in the kitchen for four days straight and create a fantastic culinary experience for a bunch of political science and social science students. And you can make new friends from some of the other year cohorts, as the cooks end up being close socially. This is something you kinda understand when you have to make 800 falafels on three hours of sleep,« says Ida Holm Sørensen.

Has an unknown applicant with a fantastic narrative just as much chance of being selected as an old acquaintance?

»Of course! It is the three teams of chefs with the best applications who are chosen,« the contact committee promises.

Thorkild has been on one of the cook teams, and knows a bit about what it is about. As a part of a five-star team of cooks consisting of eight »well-known cook guides«, he was selected in 2017 to sweat it out in the kitchen to give the new students a culinary experience that has become the hallmark of the political science freshers’ trips.

In their application, which was designed as a travel offer, Thorkild Klint and his chef partners wrote »As Europe looks inwards, we eat abroad. Over the past six months, we have set sail towards distant shorelines and put together a world menu that includes the USSR, , Mexico, the Danish town of Roskilde and much, much more«.

An event where we come together in sorrow, and share our memories: The far-too-early demise of Prince Henrik

»As responsible world citizens, we have also made sustainability a priority and dropped the beef. Instead, we support the Danish food cluster – the backbone of Denmark. Can you do this at all? Yes, you can apparently. Innovation? You bet.«

The planned (and detailed!) menu reflected the narrative. On Thursday, the kitchen offered a stew from the world’s largest democracy (India), Friday there were British, American and Greek pies, and during the night hours, the menu came to Roskilde and served a menu known from the town’s famous festival.

From one Dane to another: In 2018, one of the selected teams of cooks was Mon Henri Bon Bon, which included Adam Bregnsbo Fastholm. In their application, they emphasised the community – something that the intro weeks are supposed to be all about, after all – and Prince Henrik. The Danish Prince Henrik, consort of the Danish Queen, was never, to his chagrin, made King, but made a name for himself as a connoisseur of fine cooking. It is things like the mourning over the death of the Danish Prince Henrik, which really brings people together, they wrote in their application.

»Few institutions, and even fewer individuals, manage to bring people together like that. This particular event however, occurred this year. An event where we come together in sorrow, and share our memories: The far-too-early demise of Prince Henrik,« they wrote in their application.

The time has come for us to celebrate everything that this feisty count of Gall, who became king of Denmark, lived for.

»The cooks team 2018 Mon Henri Bon Bon reckons that the time has come for us to celebrate everything that this feisty count of Gall, who became king of Denmark, lived for. Exactly like the blessed prince would have liked it.«

On Thursday, the ‘Pixar-animated rat’s choice: Ratatouille a la confit byaldi with aubergine, tomato and courgette in two colours. Then the French dessert classic tarte tartin with the season’s caramelised apples. On the last full day of the intro trip, breakfast was served under the heading ‘Another Day in paradise’, which involved with lashings of honey and syrup.

If you want to join the race to become a cook for the political science and social science freshers, then you should start cooking up a good culinary narrative.