The depths of space from the driest place on Earth 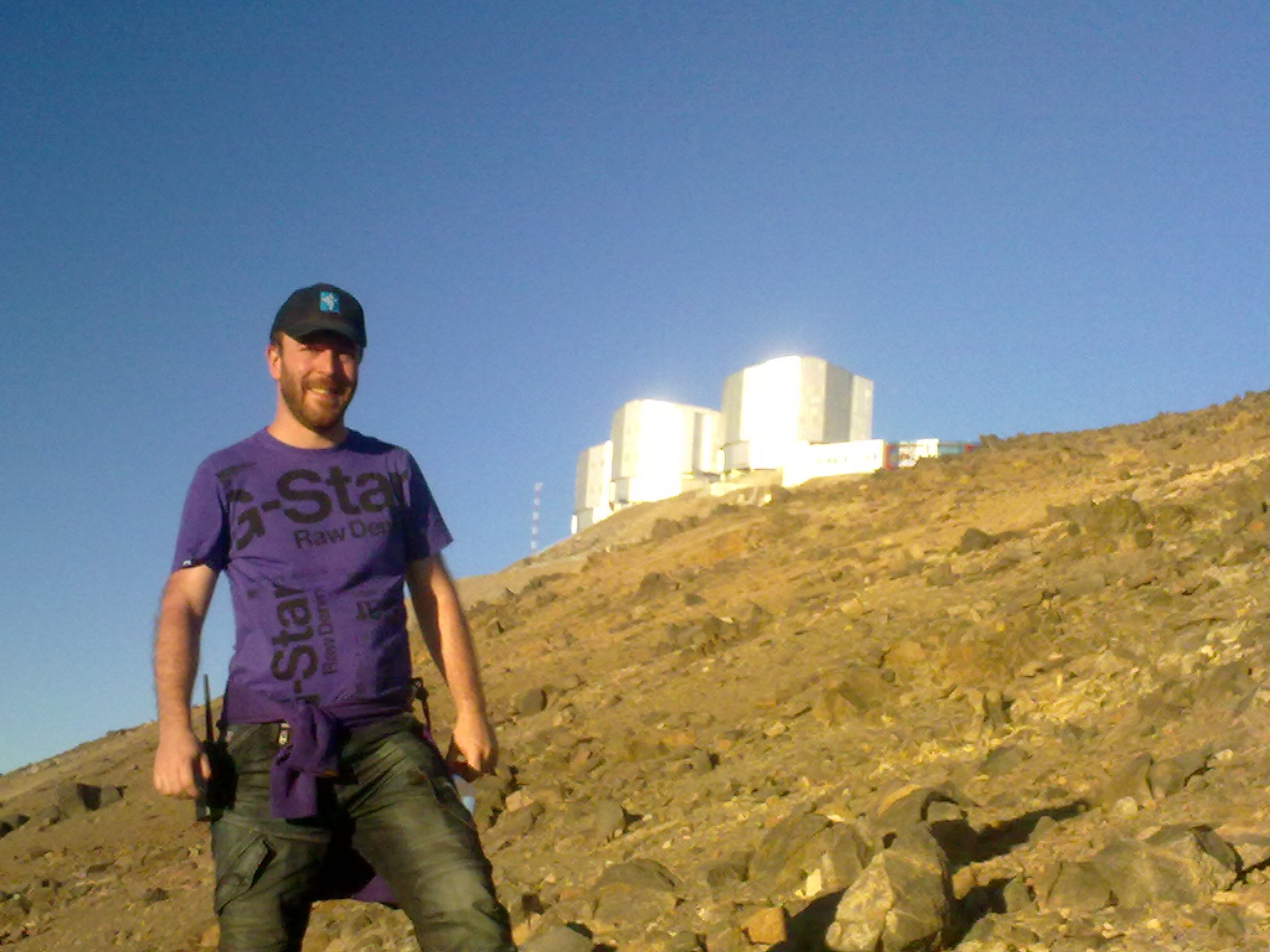 Lab & Library — Reporting from a high altitude observatory in Chile

It was the unnatural contrast that leaves me struck with awe: on one side, the cloudless, uniform blue sky, and the red, lifeless desert, but there, like alien spaceships, the shining silhouettes of four giant, high-tech buildings. The place is the astronomical observatory of Cerro Paranal, in the Atacama desert in Chile, arguably the driest place on Earth. The site is home of one of the most advanced telescopes in the world, operated by the European Southern Observatory (ESO).

I have travelled far away from home, to obtain detailed observations of remote galaxies: collections of billions of stars sticking together. My galaxies are so far away that the individual stars cannot be distinguished. I want to measure their distances, learn about their history, and know all their features. Securing such observations challenges the state-of-the-art technology, which is why the telescope has been placed in a unique location. Here, at the Paranal Observatory, the large number of clear nights, the lack of light pollution, and the stability of the atmospheric conditions, all contribute to obtain the deepest and sharpest astronomical images that can be obtained from Earth.

My field of research is the study of the so-called gamma-ray bursts (GRBs). These are powerful explosions that are produced in the death of massive stars in distant galaxies. Being so bright, GRBs can be detected up to the farthest corners of the universe. Immediately after the explosion, a single star becomes thousands times brighter than the entire galaxy that hosts it. We detect these explosions using satellites in orbit, and immediately we also look at them using telescopes on the ground.

Apart from being spectacular events in themselves, GRBs are important because they tell us about the place where they explode. The stars that produce GRBs live a short life (in astronomical terms!), so GRBs pinpoint regions in the universe where young stars are being created. By mapping the presence of GRBs in different places, and at different distances, we can learn where star formation occurs throughout the Universe. Furthermore, when we observe distant GRBs, we are effectively getting information from when the Universe was younger, since their light took billions of years to reach us. So, by studying GRBs, we can in fact learn about the history of the Universe, how and when the generations of stars have been forming in the past, leading to our time.

The blinding light of a GRB lasts a few days, after which it fades away until we can distinguish the galaxy where the GRB progenitor was residing. I am curious to see which type of galaxy it is. Is it young or old? Is the gas in the galaxy primordial, or already recycled by previous generations of stars? And are there more stars than meet the eye, masked behind curtains of cosmic dust? My observations will tell me all this.

To carry out these observations, I use the powerful method of spectroscopy. I separate the light from the galaxy in all its colors, with a very fine resolution. Different elements in the host galaxy (such as hydrogen, oxygen, nitrogen) will emit light of a different color (or, technically, of a different wavelength), and by analyzing how the light is distributed among the colors, I can infer the properties of the stars and gas in the galaxy. The ultimate goal is to learn what stars were like and how they were formed in the distant universe.

Denmark is at the forefront of this research. In particular it has contributed building the beautiful instrument I will be using, called X-shooter. X-shooter allows an unprecedented study of distant galaxies, as it can see simultaneously light in many different wavelengths, from the ultraviolet, all the way through the visible, and down to infrared. In this way, I get much more information and in a more efficient way. Astronomers from the whole world envy us for this powerful facility, and are trying to build similar instruments.

I am confident that observation will go well. After a week spent here, I will enjoy the opportunity to travel for pleasure through Northern Chile, a region fascinating in so many ways. And, after that, my job will lead me to the United States, to collaborate with the team managing an astronomy satellite, called Swift, that we use to discover the gamma-ray bursts in the first place. I feel lucky since I can carry out my research activity and at the same time I am given the opportunity to visit extraordinary places.

And I have one last surprise. During my stay to the telescope, literally on the other side of the world, I have the privilege to meet Their Royal Majesties, the crown prince and princess of Denmark, Frederik and Mary, which were visiting the observatory. Wonders never end here.