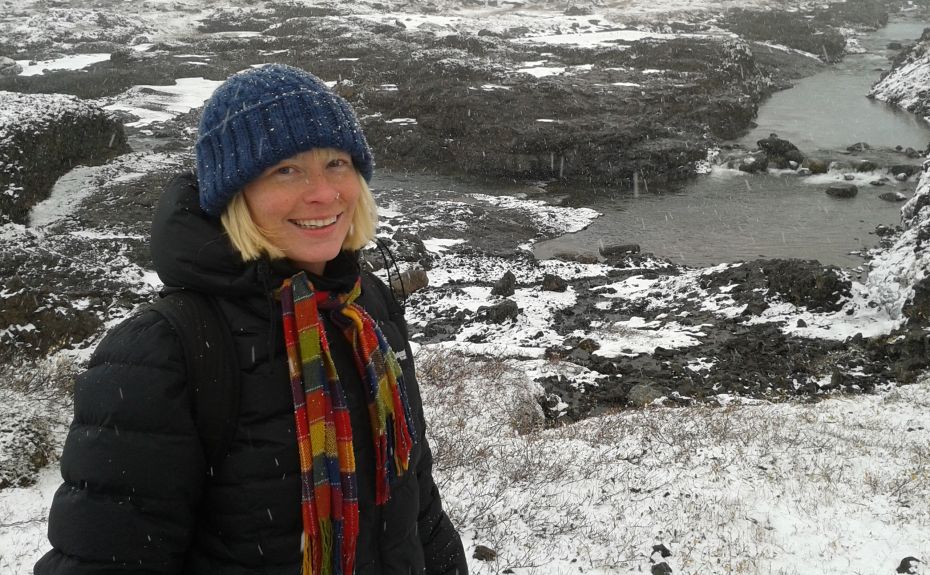 Lab & Library — Everybody worries about polar bears on Disko island in Greenland. But this year, Kristine's fieldwork was sabotaged by birds

Climate change awareness and the environment is the new black. The Arctic is receiving most of the attention, as it is one of the locations most affected by climate change. The balance between carbon uptake and release determines if the Arctic will boost or buffer global climate change in the future.

Right now, the Arctic is warming at a disturbing rate, and our fear is that the large stores of carbon in the permafrost soils will be released to the atmosphere as greenhouse gasses (methane or carbon dioxide), and that this will increase air temperature even further. At the same time, however, higher summer temperatures and longer growing seasons caused by the temperature increase may increase the plant uptake of carbon dioxide from the atmosphere.

We can explore this balance by measuring the exchange of carbon (as carbon dioxide or methane) between the ecosystem and the atmosphere, and if we manipulate parameters like temperature at the site where we are measuring, we may even be able to predict the future emissions. As ecosystem ecologists, however, we also delve into the issue of how the different components of the ecosystem interact, and which ecosystem processes or elements are responsible for a change in the gas fluxes between the atmosphere and the ecosystem.

Sampling nitrogen in the high arctic

My contribution to this research focuses on non-symbiotic nitrogen fixation and nitrogen cycling in the Arctic, that is, the way nitrogen is taken from the atmosphere and how it moves between soil, plants and organisms. It is important to consider nitrogen input and availability in the system because nitrogen is essential for most biological processes, including carbon sequestration and release. In Denmark and many other countries, nitrogen emissions from industry, agriculture and car traffic are deposited in our ecosystems, and nitrogen may not be the most important factor. In the Arctic, however, the atmospheric nitrogen deposition is very low, and even small nitrogen inputs may stimulate plant growth and microbial activity, as nitrogen form part of many essential biomolecules (e.g. DNA, proteins/enzymes). Most input of nitrogen in the Arctic is provided by nitrogen fixation. This is a process in which nitrogen gas in the atmosphere is converted to ammonia by microbes – so-called diazotrophs – that live on the vegetation or in the soil, or even in symbiosis with fungi (lichens) or plants (legumes).

The subject of nitrogen cycling is large and complicated, and even though I do include projects that investigate various aspects of the nitrogen cycle, my primary focus is on biological nitrogen fixation by free-living microbes, primarily cyanobacteria. In order to measure the nitrogen fixation I have to spend several months every year doing field work. I measure many times throughout the growing season because the diazotroph activity is impacted by weather and sunlight, and because the microbe populations may expand throughout a growing season.

My fieldwork takes place on Disko Island, in central west Greenland. The scientific station in Disko is owned by University of Copenhagen, and accommodates scientists from all over the world, wanting to do scientific studies in Greenland. I went there last summer for nearly three months, and I have already booked my plane ticket to go and continue my project.

Local wildlife has no respect for scientific research

Field work is not as easily carried out as it may sound. Apart from the weather and last-minute alterations, there are also the unforeseen encounters with the resident animals. While everybody fears being interrupted by a polar bear in Disko, this year, I was sabotaged by birds.

One of my projects was about establishing the nitrogen input made by bacteria living on moss, and how climate change might alter this input. The method I use involves taking small amounts of moss from the surface vegetation, placing it in little mesh bags and reinserting the moss into its original position. In this way, I can measure on the same samples throughout a growing season.

Unfortunately, these bags proved to be irresistible to the local birds that for some reason loved to pull the bags out and play with them. This meant that I had to start all my field days locating my samples. In the end, I had to put fishing net on top of all my samples to keep the busy beaks away. In the situation it was far from funny, but thinking about it now, it is a bit comical.

Apparently, wildlife sabotage is common in field experiments; for instance, my supervisor since told me that arctic foxes in several cases has gnawed on the electrical installations at our site, and I also heard stories about hares in Northern Sweden sites that spend their winters being snug and cozy inside plots receiving a warming treatment, so that scientists in spring found rabbit pellets instead of plants in these plots.

A project on stilts

As most other PhD researchers I head into scientific no man’s land and it feels like a balance act. If you succeed, you’re up high, if you fail, you crash. For instance, we are currently working on a project in which we aim to demonstrate how nitrogen that is released from thawing permafrost may move inside the soil to form depressions in the landscape. This has never been done before and if we succeed, we have advanced far. However, there is a real possibility of the project going like a bomb, as the method has not been used before and may not yield any usable results. However, this and my other experiments will hopefully lead to interesting and novel findings, contributing important results in my field.