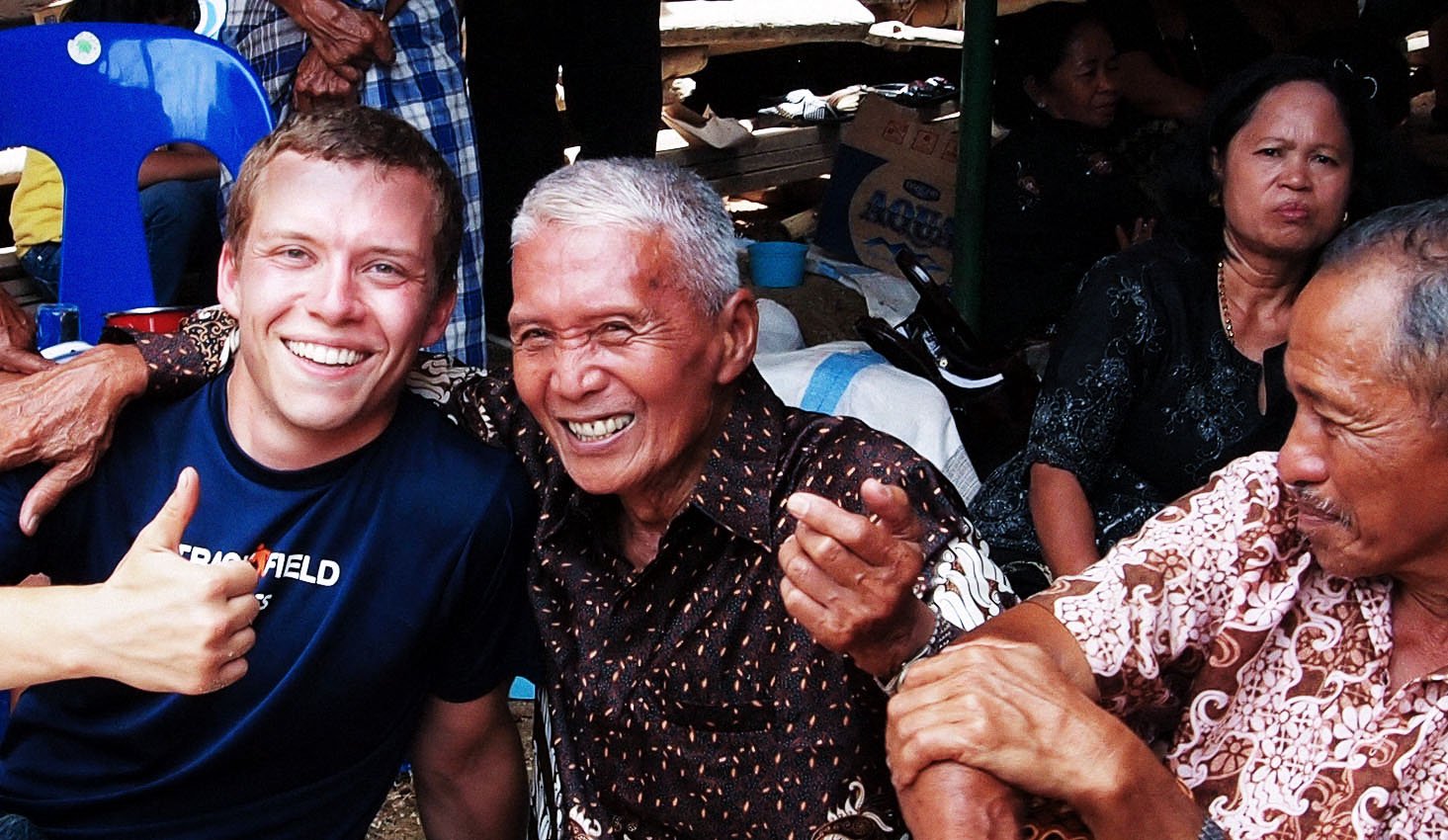 Martin, on the left, has made many friends in his travels, as he shares tales of intermittent fasting.
image: courtesy of Martin Borch Jensen

It started one Sunday afternoon where I’d skipped breakfast on account of a hefty Indian buffet the night before, and still wasn’t particularly hungry come lunchtime. Via my own thesis work on the cellular biology of aging I had become acquainted with intermittent fasting, a dietary regime under which animals seem to live longer and healthier lives by only being fed on alternate days. If it was possible to eat like that, the deal sounded pretty sweet, so why not give it a try? As it turned out I could simply not eat that day, nor on every other day since then.

Intermittent fasting is related to a more established observation that healthy lifespan extension can result from a constant reduction of caloric intake, provided that malnutrition does not occur. Under such “caloric restriction”, a wide range of animal models live longer (both on average and compared to their normal maximal lifespan) and are less likely to develop a variety of age-related diseases (such as cancer, heart problems, diabetes and memory loss). Surprisingly these animals do not become sluggish, but are in fact more active than their regularly fed peers. There are some tradeoffs, however: calorically restricted lab animals produce a lower number of offspring, while humans attempting the regimen report feeling cold and, importantly but not surprisingly, constant hunger.

Both the benefits of and biological mechanisms behind intermittent fasting resemble those of caloric restriction, but there are also important differences. Both regimes are quite obviously connected to eating, or more accurately to sensing of nutrients. The primary biological pathway in both cases appears to be insulin and insulin-like growth factor 1 signaling, which as the name suggests detects the fed state of an organism via insulin levels in the blood and regulates a variety of physiological functions.

When food is plentiful the body prioritizes growth and reproduction, but when conditions are scarce these activities are put on hold in favor of increasing the efficiency of its metabolism and other processes, as well as stimulating the organism to be awake and alert. Because of its more efficient metabolism and other protective measures, a body subject to these conditions ends up accumulating a lot less cellular damage than otherwise, which is probably the source of improved health.

Most of these effects are identical for caloric restriction and intermittent fasting, but the way they are brought about differs significantly. As mentioned, caloric restriction involves constant food deprivation, and it is therefore easy to imagine how it could effect permanent changes to our physiology. Intermittent fasting, on the other hand, most often involves a drastic or complete reduction of calories on one day but with a compensatory increase in food intake the next, such that average consumption is not necessarily decreased.

Be fruitful and multiply?

So how does it end up bringing about persistent physiological changes? Quite frankly, we don’t quite know yet. A possible explanation is that a strong hunger-induced signal on those days when food is absent engenders various physiological changes analogous to those observed for chronic-but-partial reduction of calories. On eating days this signaling is not activated, but if the regulatory changes are not specifically counteracted the physiological effects might persist (albeit reduced) into the next fasting day. Continuing in this manner for an extended period could therefore produce an equilibrium where protective mechanisms are always partially activated.

Taking this line of questioning further, one might ask why these responses occur at all? How did evolution produce a mechanism that improves health in adverse situations, and why isn’t it just permanently active? Again we don’t know for sure, but the explanation that I personally favor goes as follows: the primary objective of any living organism is to produce as many (surviving) offspring as possible. This axiom in biology underlies several theories of aging, with the argument that optimising the organism for rapid reproduction is more important than keeping it alive indefinitely.

Thus, when food is available priority number one becomes reproduction. But throughout evolution, food would not always be available, and it is easy to imagine an evolutionary advantage to putting off reproduction if it would simply result in both mother and child starving to death. In this case it becomes more important to keep the mother alive and to somehow acquire food, hence the increased focus on maintenance and alertness.

So how does intermittent fasting work in practice? My simple scheme simply means no calories of any kind from I wake up one day until the next morning, and then I eat whatever I want until I go to bed that day. Hunger is not really a big challenge, as after a week or two your body seems to learn that being hungry doesn’t mean that it’s starving to death. Thus hunger becomes a state that you can be conscious of and choose to act on or not, as opposed to an irrefutable imperative to halt all activity and seek out food. On the other hand it’s wonderful not having to worry much about how much you eat (when you do), and food tastes a whole lot better when you’re really hungry for it.

A more significant challenge is being social on fasting days, which I manage through a combination of skipping unimportant, customary eating, and moving around fasting days so as not to coincide with social events where eating is important. On the other hand it’s liberating not to have to shop, cook or even think up meals on fasting days, which along with avoiding post-food sluggishness makes fasting days highly productive.

Do I feel healthier than I did three and a half years ago? Not really, but then I didn’t feel unhealthy before. My blood pressure is a bit lower though, and I’ve seen lowered cholesterol and reduced arthritic pain in others. Even so, my sticking to intermittent fasting is an educated guess in the hope of improved health, but as long as the day-to-day of it is enjoyable I’m not about to change things.