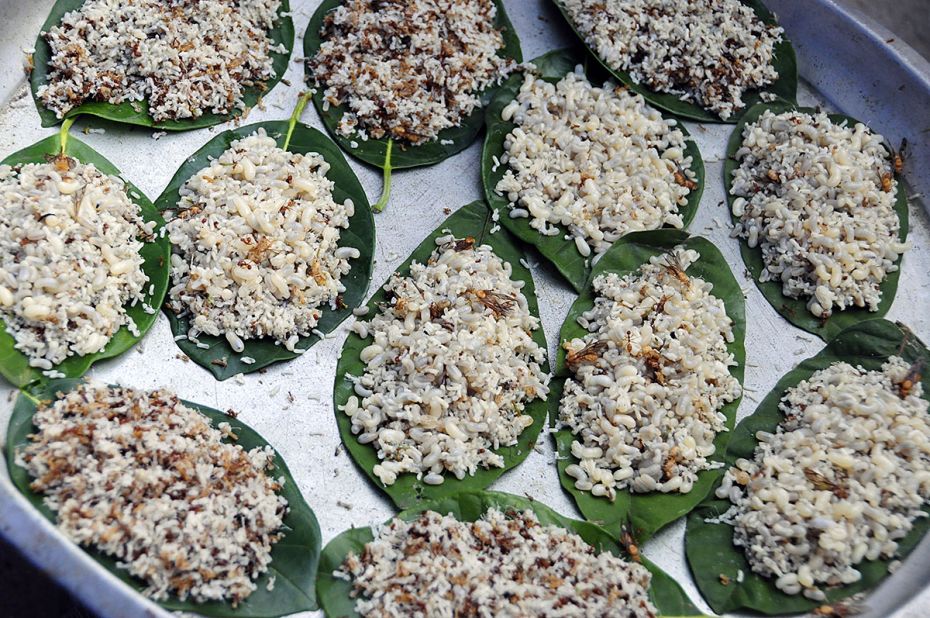 Different insects deliciously served on green leaves. Several research environments in Denmark can see the sense in us eating this
image: Department of Nutrition, Exercise and Sports at the University of Copenhagen

The industrial production of insects in Denmark and the consumers’ acceptance of insect food is the subject of an interdisciplinary collaboration between four universities, including UCPH, where four departments are researching the subject

Were there mealworms in your lunch today. Were there termites in your toddler’s baby food?

Insect food is no longer a distant future scenario, and it is about to go big in the outside world and in Europe, because we need to find alternative foods that consume fewer natural resources and help feed the world’s rapidly growing population.

In Denmark, several players have joined the fray. Four Danish universities have set up the consortium INFOOFEE to find out how best to produce food for humans and feed for animals.

At the Faculty of Science, University of Copenhagen (UCPH), four different departments are researching the subject. Here they are trying to understand the challenges of insect production, and of adapting Danish law to an actual industrial production at home. Food minister Esben Lunde Larsen (V) has already declared himself open to this new development.

Associate Professor Nanna Roos, Department of Nutrition, Exercise and Sports at UCPH, has researched insect production since 2012. In 2014, the Danish aid organisation Danida gave her a GreenInsect grant to develop the industrial production of insects in Kenya, but the experience from this she has taken back with her to Denmark.

She has helped write a report about the eating and production of insects. What are the risks that can be associated with it? Consultations were held with insecticide manufacturers, and they plowed through the literature in the field. The report’s conclusions are optimistic.

“The main message is, that compared to microbiology and viruses like bird flu, there is no major, independent, risk in using insects for food production. You can therefore think of insect production in the same way as any other animal production systems – for example, pig production. There is also no risk that, for example prions – a kind of protein that can cause BSE and infect humans, can be transmitted through insect feed. So you can also feed livestock with insects,” says Nanna Roos.

Food legislation has not moved with the times

The last point, with the new knowledge on prions not being transferred to livestock through insect feed, illustrates very well why new knowledge about insects can form the basis for amendments to legislation on food issues. The legislation originally arose from a need that arose 20 years ago to protect consumers from being infected by mad cow disease from prions in steaks.

Her collaboration also includes the Nordic Food Lab at the Department of Food Science that has given input on how insect production can make food production more sustainable and how it can enrich gastronomy.

Industrial production is about achieving greater production without exhausting the natural resources, and it is about making production independent of seasonal variation, she explains. In addition, you get more control over food safety.

“When you collect insects from the wild to eat them, there is no guarantee that there are no pesticides from agriculture in them. Toxins can also occur naturally in crops during plant decomposition and end up afterwards in the insects. When you breed insects in a closed production system, you do not get these problems,” says Nanna Roos.

Holland is today the European leader when it comes to insect production. At an international level, many research projects, development projects, and now even contractors are in the process of creating an actual industrial production of insects.

The Danish Universities under INFOOFEED are also co-operating with the private sector in the hope of setting up a Danish insect production.