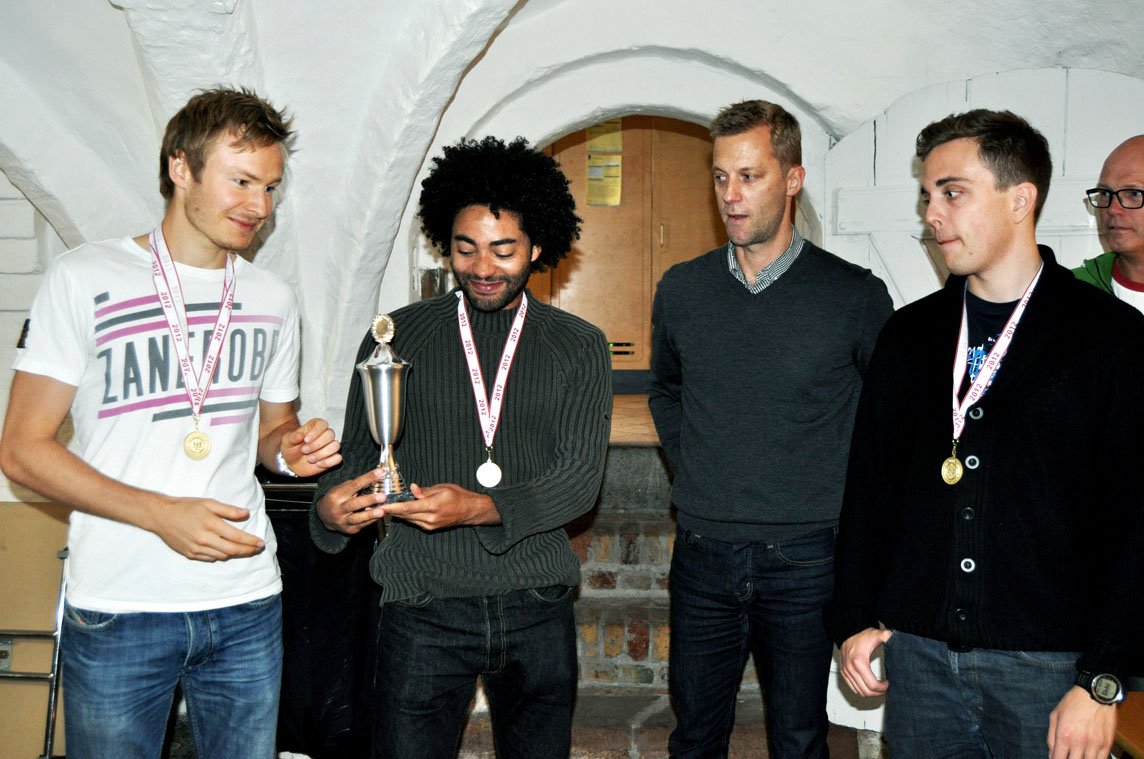 Medals for fastest DHL teams in ceremony in central campus

It was a team of four pharmaceutical scientists that was fastest of the University of Copenhagen’s DHL teams in 2012. Thursday they, together with the fastest mixed and women’s teams, and one very fast man, got their medals.

The DHL relay is reckoned to be the biggest University of Copenhagen event in terms of numbers of participants.

That win by ChemBiol1 four weeks ago actually took several days, and several disqualifications of other teams, before it was finally confirmed. The post-race dispute about who, in fact, was fastest overall would have needed a higher degree of mathematics and law to decide.

The original first place turned out to be one phsyicist from the Niels Bohr Institute, and he, of course, got a medal at the ceremony too. A team that ran second place turned out to have inadvertently skewed the rankings by running three rounds instead of five.

See a photo gallery of the ceremony here.

The fastest women were CHIP1, a team from Copenhagen’s HIV programme, for the second year running:

»When we won last year, we knew we could do it again, and started making a strategy to win,« one of the runners said to the University Post after they received their medals. Prompted, they added that they thoroughly enjoyed the University Post coverage and pictures.

From one runner to another

After the medals to the fastest mix team, ‘Os fra GL6’, a Health Science team, a prize was given to that one man from the Niels Bohr Institute, Kim Splittorff, who managed to keep all the other teams, behind him for five long laps.

»I can see that Kim is a fast man,« said Jørgen Honoré, himself an enthusiastic morning-runner, as he presented a special prize to him.

Maybe the biggest surprise at the ceremony was that the winners of the trophy for the fastest central administration team, a team from the IT department KIT, failed to appear.

(Updated)
Kresten H. Jacobsen, team leader, has since explained to the University Post that his winning IT team suddenly had to take care of an acute problem, and sadly had to miss out on the ceremony.

If you haven’t seen it yet: See if our photographer caught you in action in our DHL galleries on our Facebook page Part One, Part Two, Part Three, Part Four and finally Part 5

See a photo gallery of the ceremony here.