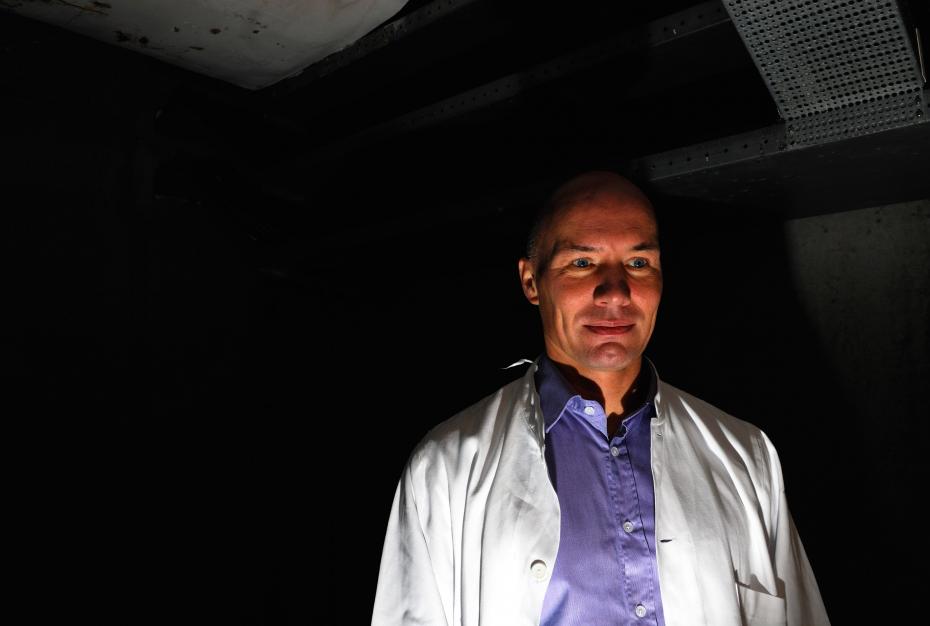 Jørgen Olsen, a professor, and a crime writer, here pictured in the deep cellars of the health sciences faculty, Panum. He has his day job on the sixth floor of the building
image: Anders Fjeldberg

»Can love be eternalized through the decay of the body? « asks Jørgen Olsen on the back cover of his debut novel, Blåt chok, (Blue Shock). The story revolves around the relationship between two young women wallowing in an obsessive love affair, which they give into through S/M-games, sexual submission, drugs and fetish parties.

The story takes place in a setting that is intimately well-known to Jørgen Olsen, namely a university campus.

Jørgen Olsen, a professor at the Faculty of Health and Medicine Sciences at the University of Copenhagen, wanted to write the book after years of focusing on an academic career, he says. This focus came at a price. It did not allow him to focus on the softer sides of life.

»As a scientist and centre leader I have one particular identity, but I felt an urge to express other sides of myself. I thought that my career as a scientist was the most important part of my life and that there wasn’t any room to focus on the emotional aspects too.«

»at some point I realized that love was missing from my life and that I hadn’t managed to combine love and sexuality in the right manner. At this point I became interested in writing.« Jørgen Olsen explains.

The thought that the book might end up in a old drawer became an obstacle to Jørgen Olsen when writing the book.

So when the book was rejected by Gyldendal and a couple of other major publishers, Jørgen Olsen decided to publish the book himself as an e-book as there were more important things than sales and critical acclaim.

»If my book makes people reflect about their lives, that’s a good thing. The themes in the book are controversial, but I like the idea that it catches people off guard,« he says.

Take care of each other

It is no secret who the book is intended for, he says.

»Myself. Always myself. I am a narcissist and I only think about myself…«

»But I believe in human sensibility and in the goodness of other people. My book is an encouragement to all of us to take good care of each other and a reminder to people that it is always better to think twice before passing judgement.«

So how about an excerpt? The book is in Danish, but the University Post offers a translation of a passage, just so our non-Danish readers can get a feel for it. Here it is (and be forewarned):

To give or to take it in the ass!

If at some point, the novel becomes a sensation, someone might translate it into English in its entirety. But until then our readers can practice their Danish on it. It can be purchased here.