Fieldwork with Baby Jesus on your back 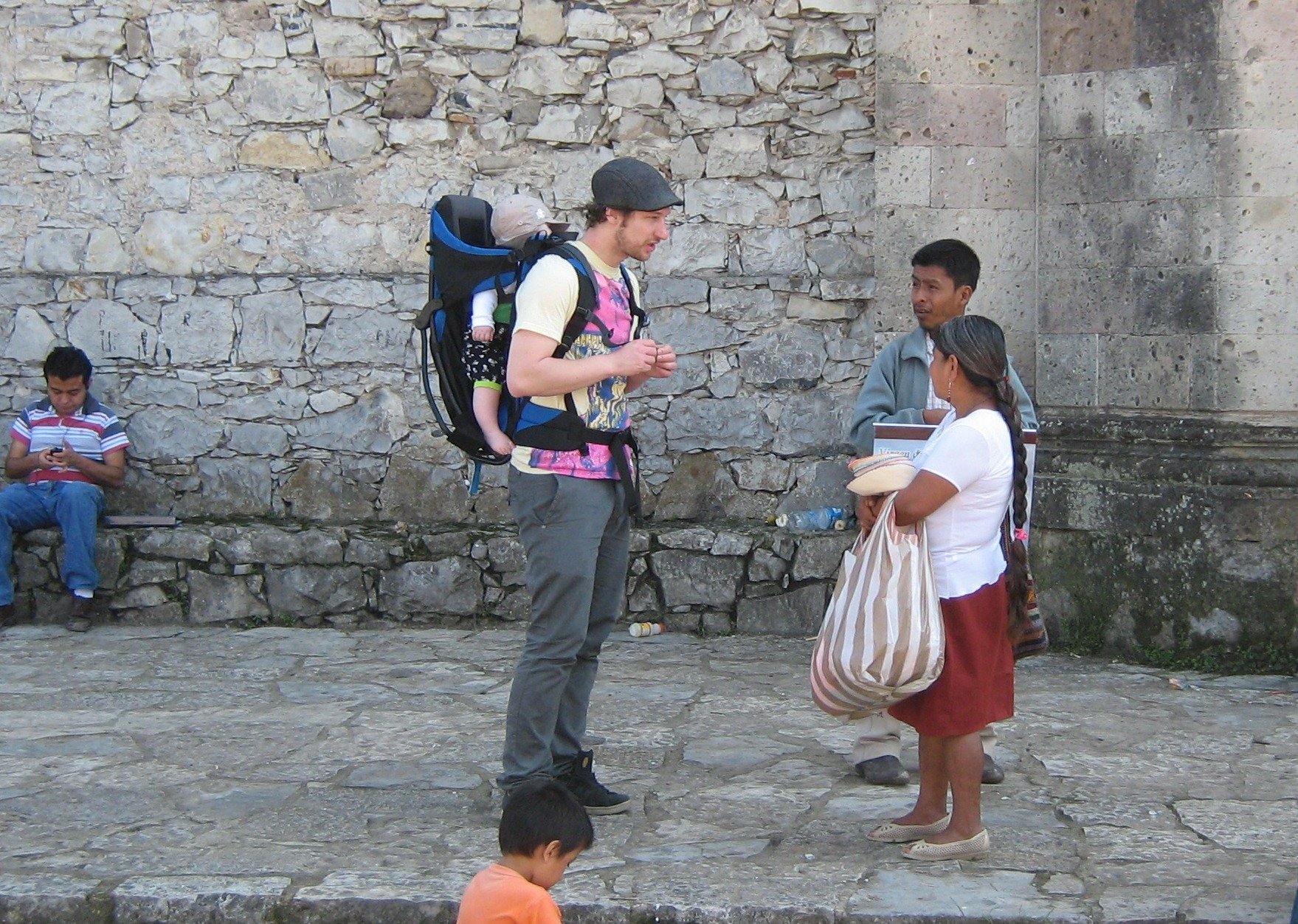 Casper and Julius are being invited to join Sunday mass.
image: courtesy of Casper Jacobsen

This my partner Louise and I discovered upon returning from the field to the library. Here I reflect on how Louise and our son of 8 months, Julius, shaped ‘my’ fieldwork in the Mexican town Cuetzalan.

The general question of why accompanying family appears to be perceived as irrelevant to the field situation is an interesting one, because the answer points to unspoken research ideals. There is a protracted scholarly tradition of establishing research authority by rendering invisible the researcher’s own role in the collection, and construction, of data, which assists in constructing the researcher as neutral and objective observer.

However, because I traveled with family, seeing myself as an invisible, objective observer never really became an option. Not only because I had a screaming kid on my back most of the time, who made me highly visible and audible, but because I got a glimpse of two separate field situations that positioned me differently and produced different kinds of data.

Unpredictable positioning: Carrying Baby Jesus on my back

A backpack-like child carrier eased transport of Julius. The carrier caused a lot of attention from the locals, who were smiling, laughing, pointing and complimenting Julius whenever we moved about. In that area, carrying around babies is a female task, so we suspect that amusement was partly caused by the reversed gender roles.

The carrier in itself was probably also a source of laughter; that massive fixed steel frame Julius was seated in contrasts with the soft shawls local babies are mostly placed in. Nevertheless, attention stretched beyond amusement. Traffic at times congested in narrow streets, when acquaintances stopped their cars to greet, primarily, Julius. With Julius on my back, we rarely approached people to talk, because people approached us instead. These conversations made apparent that first and foremost, the locals saw Louise and me as a parenting couple, and the lot of us as a tourist family.

Within a week we had become familiar faces and were transformed into local versions of ourselves: Julio, Louisa, and Gaspar, and after a few weeks Julio was the most famous baby in town – a local celebrity affectionately referred to as Niño Dios, meaning Baby Jesus. Baby Jesus plays a notable role in Mexican Catholicism, and the use of this nick name refers to Julius’ perceived likeness with the emblematic version of Baby Jesus: A white baby with fair, curly hair.

Corresponding with what Joan Cassell experienced as a mother and anthropologist during fieldwork in Jamaica, Julius not just represented our locally perceived power, status and wealth, but embodied an access point to our family unit and its locally ascribed values. As a natural part of engaging with the locals, they came to carry him around, which spurred informal conversation, and perhaps because of this he became a platform for verbalizing straightforward perceptions of class and race.

In short, primarily because of Julius, our renown and circle of acquaintances in town accelerated beyond anticipation to the point that – due to tragic circumstances – we became honorary participants at a nine-day funeral vigil after having spent merely three weeks in Cuetzalan. The sad news reached us several days late, and in the meantime a rather large group of mourning family had scanned town to locate us. During prayers we were placed next to the mourning mother, whom we had not previously met, and family members asked us discretely to comfort her, implicitly stressing that our participation was important.

Were we honorary guests merely because of our friendship with the deceased and her affection for Julius? Did our ascribed class and race status play a part? And was Baby Jesus more than a nick name? I honestly don’t know. But what I do know is that the deceased owned an eatery, which we had frequented habitually exactly because we were traveling with a baby. Our limited mobility and tendency towards repetitive routines actively shaped our relations. We stayed longer in fewer locations than had we traveled without a baby.

Traveling as a family unit appeared to correspond well with local ideas of family and appeared in all likelihood reassuring. Because we were often observed playing out our family roles in public, those roles became the prime optics through which we were approached and understood. Nonetheless, notions of class and race surfaced from time to time, indicating that these notions latently structured conversations.

When I met acquaintances on my lone excursions, people inquired about Louise and Julius; not just how they were, but also where they were, and inherently why they were not here. Clearly, I had been positioned as spouse and father. Still, several people posed the unexpected question: “Where is your mother?”, which shows that our ideas of family were not completely concordant.

When professor emerita Una Canger arrived during my fieldwork, many people assumed that she was my mother, and when I responded that she was not, people would then assume that she was Louise’s mother. So, although we understood ourselves to be a self-contained family unit that would seem more in line with local life, we were still being viewed to some degree as an unnaturally detached alien family subunit. That probably underlines the awkwardness I felt at times when approaching people singularly. “What is this lone man doing snooping around here? Where, and why, has he left his family behind?”

This alternation of roles made me think about the degree to which we are positioned in the field and how such relations shape the kind of data we get in the field. Generally, when I was with my family, informal conversations centered on family life, daily life, life in the village and so on; but conversations departed from the way we were positioned by the field. When I was out on my own, conversations departed from my notions of the field, and my object of research thus came to create the premise of the dialogues.