Got hiccups? You can now cure it with a rectal massage 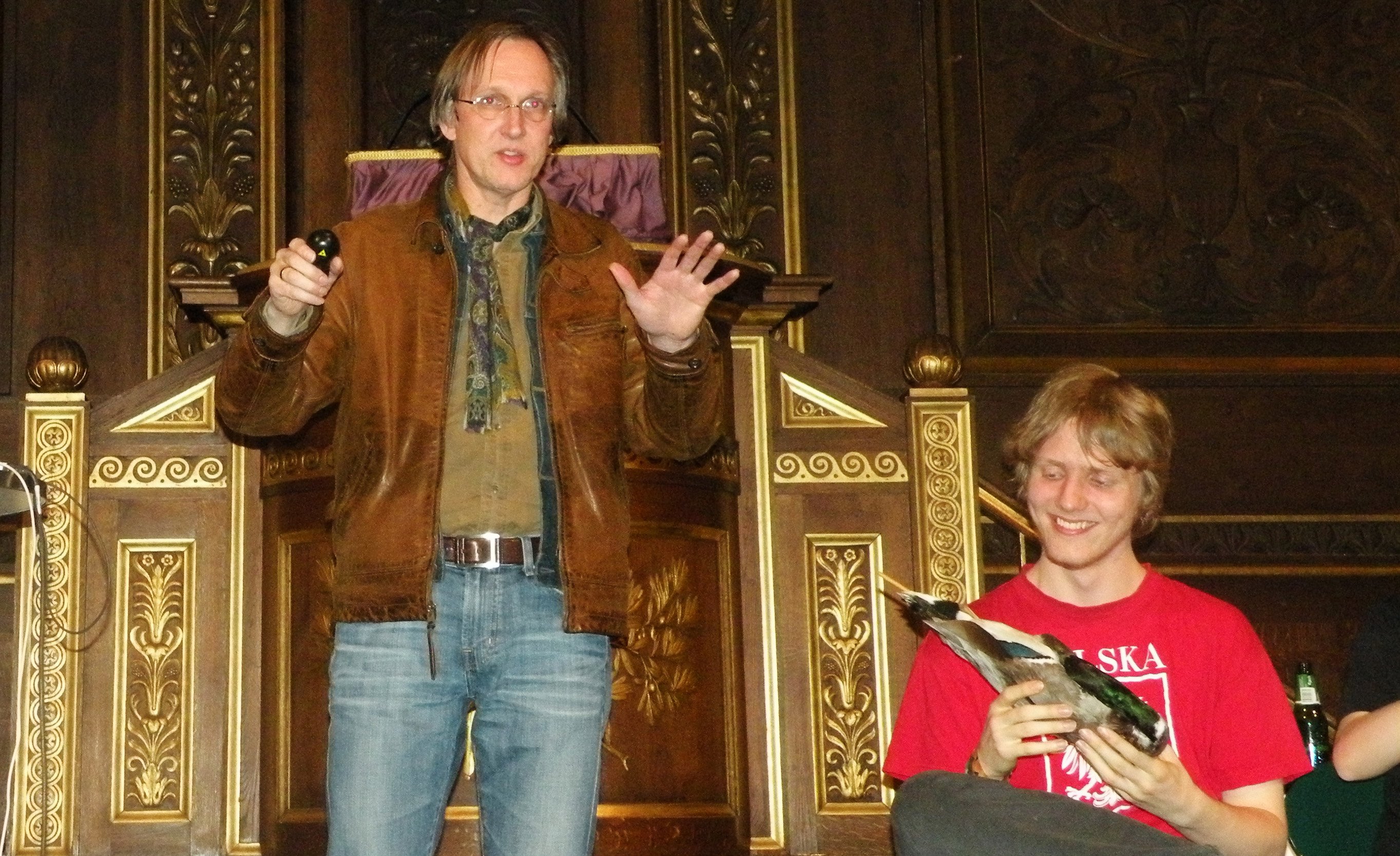 Kees Moeliker presenting his topic in the Ceremonial Hall, University of Copenhagen. The timekeeper (right) holding the actual, yes, the actual dead duck that made Kees' research so famous
image: Jane de Verges

People should not be penalised for their oddity. 'Researcher of research' Marc Abrahams talked to the University Post at the 'silly' research Ig Nobel event, which also featured Kees Moeliker of dead duck fame

So what do these topics have in common? Curing hiccups with rectal massage, correlating schizophrenia to footwear and modelling head injury with coconuts.

Well, they have all been investigated and published by real scientists, and all were among the many strange topics of Wednesday night’s Ig Nobel Prize event, hosted by the Department of Chemistry at the University of Copenhagen. The Ig Nobel Prize, the Nobel Prize’s satirical cousin, is the brainchild of author and self-proclaimed “researcher of research” Marc Abrahams. It is awarded every year to 10 outstanding examples of bizarre, improbable, and unintentionally funny work in all areas of research.

The sold-out event took place in the city campus ceremonial hall, but the night was far from formal. Marc Abrahams calmly led hysterical audience members through some of the more notable work of past winners, in such fields as medicine, engineering, physics, and even peace. Volunteer timekeepers sat onstage and interrupted speakers who went over their time by ringing a bell continuously. Free beers were provided at the intermission by the Carlsberg Foundation, which funds the event in Denmark. At the finale, Dutch museum curator Kees Moeliker proudly held aloft the now-famous homosexually raped dead duck, whose misfortune is commemorated every year 5 June as Dead Duck Day.

Kees was one of the three recent recipients of the prize in attendance. American Brian Crandall presented the work that won him the award for archaeology, in which a human swallowed a partially cooked shrew to study the effects of digestion on animal bones. Part of this talk included getting audience volunteers to try hunting for tiny bones in simulated excrement. Masanori Niimi form Tokyo University described his work comparing survival of mouse heart-transplant patients subjected to opera versus the Best of Enya. His choice of music samples was rigorously objective: “La Traviata is my favorite opera!,” he said.

Though some consider the prize veiled criticism, nominations for the award number in the thousands every year, and the winners are most often gracious and thrilled with the recognition. A special award ceremony is held every autumn at Harvard University in the United States, with even more bizarre traditions, including the presence of an 8-year old girl whose job it is to sit on stage and choose to terminate any speech by announcing “please stop, I’m bored”.

Winners are awarded nothing but a humorous symbolic trophy, with the exception of this year, when they received ten trillion dollars each, albeit in hyper inflated Zimbabwean currency (Gideon Gono, governor of Zimbabwe’s Reserve Bank, won the prize for Mathematics in 2009).

Are you the next Ig Nobel laureate?

With all the fun these people are having, it’s hard not to hope for an Ig Nobel of your own someday. However, Marc Abrahams insists that those few who nominate themselves almost never win. “Getting chosen should be a side effect of the work you’ve done,” he stated in an interview. “If you set yourself up to win, you will surely fail.” This important detail keeps the humor of the award genuine.

Where you come from might play a role as well. The scientific communities from different parts of the world view the award differently. “There are some places that have honor cultures, and those chosen for an Ig Nobel are much more reluctant to accept.”

Marc Abrahams also pointed out the two countries with the most overall winners: Japan and the U.K. “These countries stand out in the way they treat people who are eccentric. In some parts of the world, people are punished for their oddity, but these cultures recognize that strange ideas can change the course of history.”

Aside from laughs, Mr. Abrahams wanted attendees to leave the event with an appreciation for those who don’t let convention stand in the way of their curiosity.

“Improbable research is about research that you don’t expect. I want people to walk away with new interest in unlikely topics,” he said.

See more information in the fact box on the right.