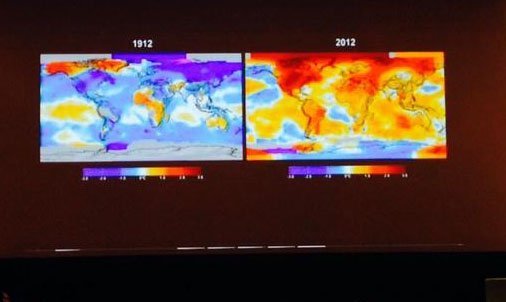 It is one of the top trending events right now. The IARU Sustainability Science Congress hosted by the University of Copenhagen. Here is a selection of what captured participants' attention on the first day.

It is a three-day congress at the University of Copenhagen and draws 140 speakers across disciplines to discuss research collaboration on climate and sustainability challenges. The Sustainability Science Congress organized by the International Alliance of Research Universities (IARU), has so far has presentations by the Danish Prime Minister, the EU Climate Commissioner and a host of other big sustainability names.

In the Radisson Blu Falconer Hotel & Conference Center, there is a captive audience of researchers, policy-makers and interest groups, all tweeting about the event on the hashtag #IARU2014. The tweets that we have selected give an overview of the first day’s happenings.

Forget Holocene. Now it is the Anthrocene

Judit Rodrigues followed a presentation on whether humans are overwhelming the forces of nature.

We are starting to live in a new period: ANTHROPOCENE #iaru2014 Is there equilibrium on it? pic.twitter.com/G4GHycm9c0

Classic geological time scales have us living in the Holocene. Not any more.

EU Commissioner Connie Hedegaard’s presentation had one slide that really blew the audience, if you reckon it by the number of tweets.

Johan Rockström’s presentation got alot of interest too.

Johan Rockström asks: How do we uphold a safe biological space for humankind? Issue: #inequity of resources #iaru2014 pic.twitter.com/TJjhc77Lrh

The human habitat is at risk.

Helle Thorning-Schmidt, the Danish Prime Minister, was another big name at the conference.

PM Helle Thorning-Schmidt: we are beyond discussing “is this happening?” #climatechange affects us all #iaru2014 pic.twitter.com/TPJpy6ioTe

That climate change is happening, is no longer up for discussion. But what to do about it?

Learning and getting inspired

Hanna Ahlström, just like many at the conference, felt the buzz of inspiration.

Excited to be able to participate @GlobChallenges – ready to learn and get inspiration #iaru2014 pic.twitter.com/lLgTIb5jGR

Hanna took this shot of Lykke Friis, the University of Copenhagen’s Prorector for Education.

What words are buzzing?

He promises another one of these later in the day.