Intranet not for the prudish 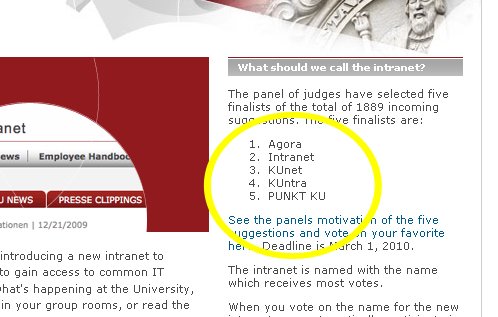 The top five names for the new intranet, out of 1889 suggestions.
image: Screen shot

In April 2010, the University of Copenhagen introduces a new intranet to replace PUNKT KU. You can now vote to choose one of five, uhh...original names put forward by staff and students.

You can’t say university students and staff lack a sense of humour.

The five shortlisted candidate names for the new University of Copenhagen intranet have been released, and the referees’ certainly haven’t held themselves back.

When the competition finished on 18 January, 1889 name suggestions had been submitted, according to a just distributed mail to staff and students.

The panel of judges have chosen five names from the pool that can now be voted on. The intranet will be given the name with the most votes.

Here’s the panel of judges’ motivation for their choices, followed by what we at the Post think of the top five:

Agora – »The Greek name for square or forum is a good name for the meeting place of the whole University. Three people have entered the proposal,« the judges write.

Probably the most cerebral of the frontrunners, suggested by three people.

Intranet – »It tells what it is and works well in both Danish and English.«

Quite a logical name for an ’intranet’. It’s a good thing there were 1889 suggestions. 11 imaginative individuals put this forward .

KUnet – »It is an expressive name – and it is the most popular suggestion judging by the 115 people who have entered the suggestion.«

Fits in well with existing university slang like KUlex, Kubis, and probably a few more we can’t remember.

PUNKT KU – »Everybody knows what PUNKT KU is, and the new intranet will replace that.«

An oldie but a goodie. The best part of it is, that no one would notice the difference. It might be bit tricky for English speakers though.

KUntra–»It is a fun contraction of KU (short for Københavns Universitet) and intra, and it tells us that this is something internal at the University.«

Internal indeed! The most entertaining candidate. Especially if KU becomes CU (Copenhagen University) in English, making the intranet a piece of female anatomy and a word of angry abuse in one.

In the University Post newsroom, we have all already voted for our candidate.