Is Denmark as bad as everyone makes it seem? 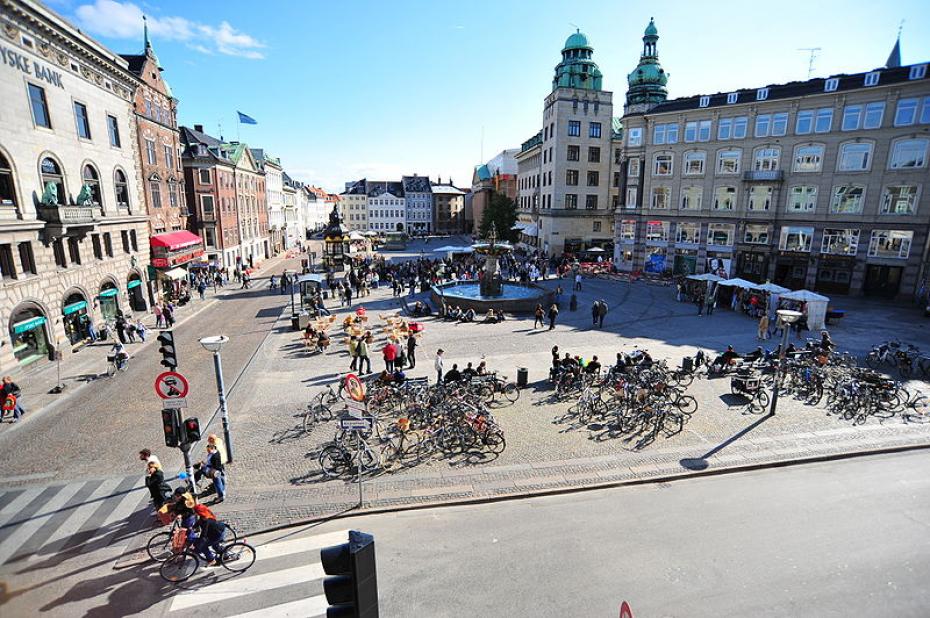 Gammel Torv, or old square, is Denmark at its best. But beneath the surface...
image: Bill Ebbesen ( Via Wikimedia Commons)

Yes it is, according to our critical columnist Kelly Draper, who is tired of her country's internet love affair with Denmark (featured comment)

My country (the UK) is excited by the very flattering photos Denmark keeps sending, with the camera angle oddly chosen to point down all the time with really quite bright lights. They have also read its dating profile over and over. Some of the lovely things Denmark says it does are really quite lovely! And exciting!

Imaging living there! The journalists who are invited to Copenhagen by the Danish tourist industry react as if it was a first date. They have only nice things to say. The venue chosen by Denmark for this first date was really nice. And Denmark was totally on Denmark’s best behaviour all evening. They totally took the UK back to its place and showed it some hygge. In all possible ways.

Naturally, after such a courtship, your thoughts turn to co-habitation.

But a quick once-over with the old Google search engine and … Christ! … Well, if I wanted to doggedly continue with this over stretched analogy… it would be a bit like coming across someone’s Myspace blog about a breakup with the person you were courting. Or their Tumblr, if we want to be all twenty-teens about it.

A lot of people living in Denmark have written on the internet ‘OMG What The Fuck?’ whilst in the midst of a culture shock-driven breakdown. Others have written ‘No seriously, what the fuck?’, when the culture shock has worn off and they are still not impressed.

There are plenty of foreigners who never write anything. They feel reasonably content (for a given range of contentedness) and there are a few foreigners who only write up the good stuff. These foreigners and their blogs are aggressively pushed to would-be ‘expats’ by the government.

This is when my metaphor is no longer any use. I guess it would be like an internet dating prospect sending you to their wedding photos Flickr album to show you their first marriage to prove they are capable of giving and receiving love. And as far as I know, this is not a trend on internet dating sites.

But yeah. There is a remarkable amount of shit-listing of Denmark going on.

Is it fair? I am going to go ahead and say ‘yes’. But with some caveats, Denmark is probably OK. It is a reasonably well-off country with mediocre services, medium-to-high taxes, medium-to-very good standard of living, and currently quite cushy terms of employment. No one starves. No one gets cholera. No one is tortured for their beliefs. But as I have said before. This is setting the bar waaaaaaaay too low.

The schools are a bit in need of an overhaul. Health care is variable. The borough councils are unhinged. Crime is high. The terms of employment are being made progressively more shitty.

But for the expat, the main concern is: Will I experience happiness and enjoyment? The answer is: Unless you put an extraordinary level of effort into entertaining yourself: No.

The language barrier is a serious impediment to happiness. This is not really improved by saying: ‘Well, it’s Denmark. You should speak Danish.’ That does not, with the best will in the world, get your pipes fixed when you are fresh of the boat and need a plumber.

I dare you to try and make friends

Then there is the thorny question of social interactions. If you are coming to Denmark to marry a Dane or for study, you might be OK. It can be a lottery. Even very outgoing, friendly people who have had no problem making friends anywhere else, can find it hard to make friends in the Danish community. This is partly because they often do not speak Danish well enough to develop a friendship, but mostly because Danes are just not that into us.

Studying is a special case. Your classmates, even if they are Danish, might not come from the city and are just as interested in making new friends as the international students. However, they sometimes forget they are speaking Danish when they arrange social events which automatically excludes anyone who hasn’t got past the ‘Jan købte blomsterne til sin kone’ in Danish class. Let’s go ahead and call that an innocent oversight, shall we? Whether it is or not, makes no difference. The upshot is, you are not going to the cinema with your Danish course mates, and so your friends will naturally end up being people who remember to communicate in a language you understand when making social plans.

Danes do not tend to make a lot of new friends of any background after they finish their studies. If you go to a party with two groups of Danes who know the host from two different places (say: badminton club and sailing club), it is unlikely these groups will blend. Everyone at the party is the type you might get back home where the guest is just too shy to go talk to others and must wait for other guests to come to them. If everyone is like that, no one is coming to anyone.

Throw having a guest with a different culture into the mix and you might as well forget about them socialising beyond the old ‘Immigration Interview’ conversation (When did you come? Why did you come? How is your language coming on? When are you leaving? ).

And that is only if they even get invited to a party. If you come to Denmark, your social life is over. All your friends will be foreign or mates of your Danish spouse. (Unless you happen to like doing sport). If you like having friends, then yes, Denmark IS as bad as everyone is saying.

Yes, it is as bad

Meanwhile, even though they are most definitely not ‘all like that’, the only Danes you are really going to get any interaction with are the ones who are like that. They shove you in the street, they treat you like a twat when you try to speak their language, they push in front of you in shops, they leave their dog shit on your doorstep, they tell you off for talking to your kids. It can get quite fraught because although you do not want to become racist, you are facing a reality where you are effectively having to take it on trust that they are not all like that.

And if you have to interact with the authorities, it’s time to flip a coin. Heads: they will treat you like a human being. Tails: they won’t.

So. Yes. It is as bad as everyone is saying. It’s not paradise and it’s not hell. And you just need to be ready for that if you are serious about moving here.