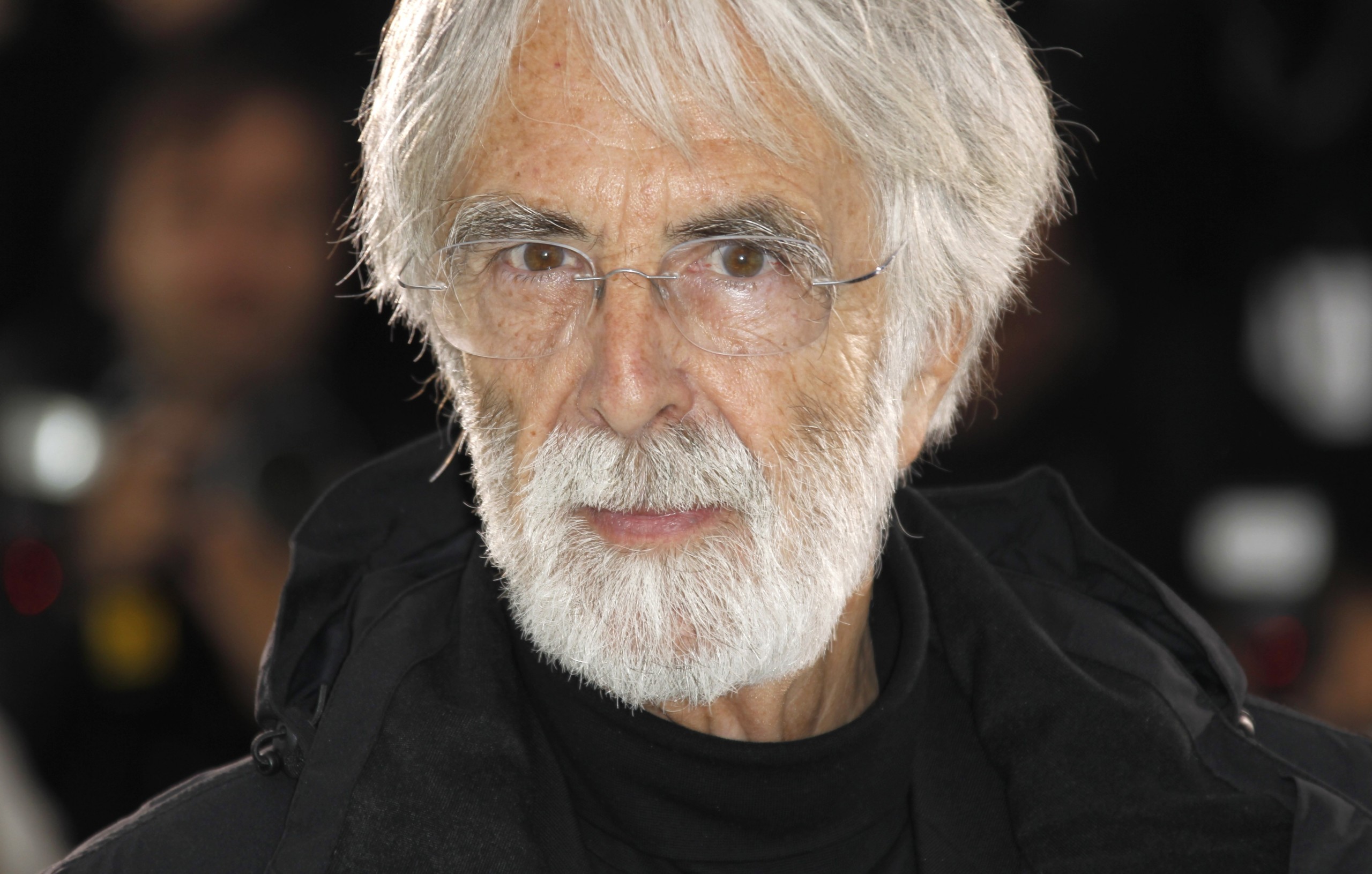 The Austrian film director Michael Haneke is the winner of this year's Sonning Prize
image: Polfoto

His films have audiences crying and throwing up in the cinema: Maker of arresting, controversial film art and Sonning Prize winner talks to the University Post

Michael Haneke’s films have been showered with awards: Two Palmes d’Or at the Cannes Festival, an Oscar for best foreign-language film for his masterpiece Amour in 2013. And now June 18, he is awarded the Sonning Prize, Denmark’s most important cultural award, at the University of Copenhagen.

I meet Michael Haneke in Vienna, in the cozy Café Eiles, in close vicinity to several of the city’s theatres, and frequented by actors and theatre people.

”’Winning awards is an acknowledgement of the work I do and it improves my working conditions: the more recognition you get, the easier it is to get good working conditions and funding for new projects. This is not to be underestimated”, says the 72-year-old filmmaker.

After Bergman and Kieslowski, Haneke is the third film director to be awarded the Sonning Prize.

”Bergman was the film god of my youth”, he says ”and Kieslowski and I have always taken up similar issues. [Kieslowski’s] Dekalogue was a big project, and especially his screenplays were excellent”.

”Both of them also have a certain graveness in their work, and they see the cinema not as entertainment but as a place where we confront our problems. This connects us, because it is also what I am trying to do”.

A merciless battle between Europe and the U.S.

The Sonning Prize is awarded every two years for a “commendable work that benefits European culture”. Haneke himself has filmed movies in his home country of Austria, but also in France and Germany, and, for the remake of his classic Funny Games, even in United States.

”I am neither a French filmmaker, nor a German one or an Austrian. I produce my movies, where it is possible and where I can find the actors I need to tell the story”, he says.

”The big plus in European art is its diversity: there are many different mentalities, identities, and traditions that each country has developed in the course of their history. This wealth of variation is difficult to find elsewhere”, says Haneke.

“I choose topics that irritate or agitate me. The point is to create a feeling of concern or shock, to be made to feel something more profound than is the case in mainstream cinema. Mainstream film and television are using a kind of sedation strategy”

”The influence of the American film industry has increased tremendously in recent years and there is a relentless struggle, especially in film distribution. If you make so-called art-house films, you need to rely on winning awards at festivals to survive. Previously, the television industry was a playground for young directors, but this is no longer the case. Today, you need to follow the producers’ requirements in terms of content and production, and lower the standards. I have always filmed about three minutes a day, but now you have to produce 12 minutes per day for a TV series – this simply cannot turn out well”, he continues.

Michael Haneke started his career in television and theatre, but he has now been directing films for nearly 30 years. Has it become more difficult to create art-house films in this period?

”The cinema as an artform is constantly changing. Nowadays, anyone can record a movie with a computer or phone. And if they have good ideas, then this may work very well. When I saw Hitchcock’s Psycho for the first time, I was fascinated by the shower scene. And I had to go see the movie 50 times in the cinema to understand how the scene worked. Today I just buy the DVD and watch it frame by frame, and can analyze it myself. This is an incredible advantage.”

In turn, Haneke thinks, that the conditions for young filmmakers have deteriorated in recent years.

”It has become harder to get into the industry. You can make one film, maybe two, but if they are not successful, then you’re out. When I started making films, it was easier: we had niche programmes and channels where you could show movies. But now, the public television stations are competing with the private ones, and this leaves no room for artistic products. In addition, we currently have 70 directors in the Austrian film directors’ association, but we only produce 15 films per year. What are the others living off? The Film Academy in Munich has to educate five to seven new directors per year. I don’t know where they expect to find jobs. Making movies is popular today and the competition is fierce. It is not very easy for a young person”, says Haneke.

Seeing the glass half empty

Haneke’s films are not easy to digest and deal with themes such as violence and death in an uncompromising and brutally honest manner.

”These topics are also uncomfortable for me, that’s why I make movies about them! To provoke an emotional response is the essence of drama. The Greek tragedy is not funny. I choose topics that irritate or agitate me. The point is to create a feeling of concern or shock, to be made to feel something more profound than is the case in mainstream cinema. Mainstream film and television are using a kind of sedation strategy which runs contrary to the basic idea of drama: that we need to present a conflict in a way that makes the viewer engage with the topic later. I have nothing against that at all, but almost 90% of the films that are produced already do this, so I’m happy about the last 10% that deal with the reality we live in. And reality is just not an awful lot of fun”, he says.

“During the war in Yugoslavia, people were shocked when they saw the first pictures of the victims. But after a year, they were used to it. And that, I think, is very dangerous.”

Haneke studied psychology and philosophy at university. His films are not easy to understand. His goal is to give food for thought.

”I try to make the kind of film that I would also like to see. And a film satisfies me, if it somehow makes me grow. When I go to the cinema or read a book, and someone explains everything to me, I get bored. But if I somehow leave the cinema as a different person than went in, then something has happened. We interact with art, because something must happen. I have no talent for comedy, although good comedy is something quite wonderful. It is the famous glass – half full or half empty – and I always see the glass as half empty; it’s a question of character and mentality. I’ve only directed one comedy, for the theater, and it was my only real flop. I just have no talent for it”.

In his last film, Amour, Haneke depicts an old married couple’s love story in the context of illness and death. How does Michael Haneke explain that precisely this film came to be his greatest international success?

”Death used to be a taboo, but the topic has been increasingly discussed in public during the last ten years, due to the ageing of the population. People are beginning to accept that we have to talk about death. I was lucky that the film came at the right time. But it wasn’t planned. I started considering this topic because of something that happened in my family, so I had to confront the issue. But it’s always a coincidence: to make a film, I choose a subject that moves, irritates or offends me. Then, I try to think about it and try to come up with something. However, there are many things that I think about and nothing useful comes out of it”, he says with a smile.

In his films Benny’s Video and Funny Games, Haneke addresses brutal and senseless violence. But he explains that it was the representation of violence in the media that interested him, not violence itself.

”I think the extent to which the media contribute to our increasing indifference towards violence is an important issue. I cannot watch action films, because violence in these films is a consumer product. The permanent and uncritical presence of violence in the media reduces the sensitivity towards violence. During the war in Yugoslavia, people were shocked when they saw the first pictures of the victims. But after a year, they were used to it. And that, I think, is very dangerous. If the world were the way they show it in the TV news, I would have killed myself long ago. If you are constantly bombarded with shocking images, you become more and more callous. If you hear a jackhammer all the time, it drives you crazy in the beginning, but over time you get used to it. That’s the problem: people tend to get used to things, and the representation of violence in the media is disproportionately large. This has always annoyed me tremendously and I still see it as a big problem”, he says.

”But on the other hand, I have tried to find an aesthetic form that addresses violence without explicitly showing it. The viewers should perceive violence as something that is deeply frightening and unpleasant. My films are shocking because the audience is accustomed to the way violence is most often portrayed in the cinema: as a consumer product”, says Haneke.

Michael Haneke’s films are far less violent than any TV thriller, if one takes into account what is actually shown, he says, and this is how he tries to disturb and unsettle his audiences:

“Questions are much more frightening than answers, and asking questions is an important function of the dramatic arts. If you keep claiming that answers actually exist, as the mainstream cinema does, then that doesn’t work”, says Haneke, smiling. ”Because there are no answers to the big questions in life!”