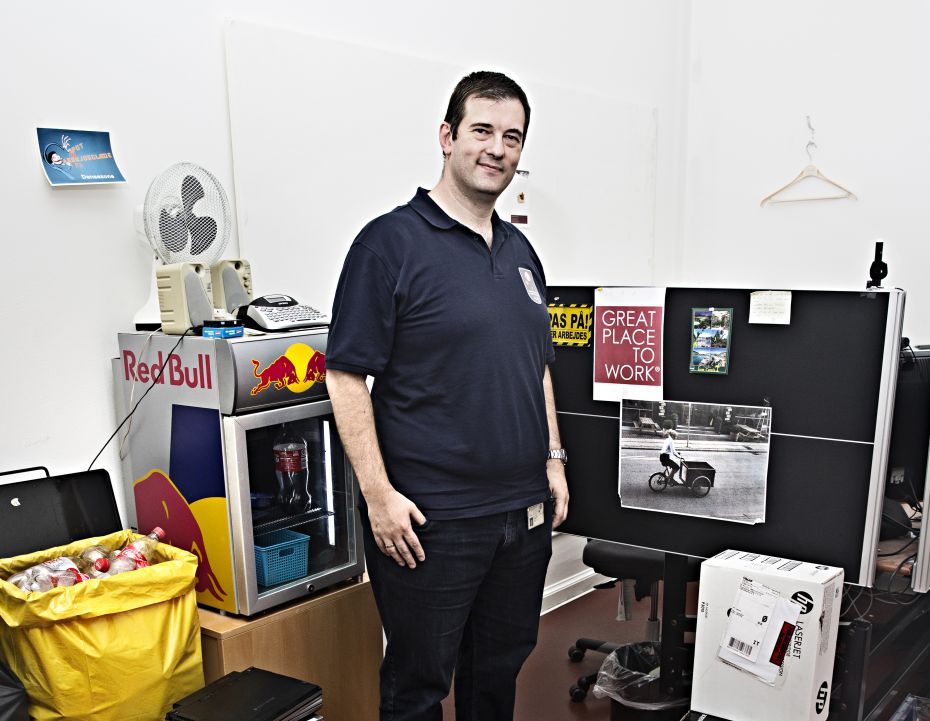 In the IT supporter’s office job satisfaction is as tangible as the empty coke bottles. On the partition screen he has a picture of the boss who makes his job the best in the world, because she gives him both freedom and responsibility
image: Lizette Kabré

Who does the nice voice belong to in the other end when you call IT-support, outraged over that damned PC?

Uniavisen is not allowed to leave the Service desk without having tasted the cake. IT-supporter Milan Mitic turned 43 over the summer holidays, and his wife has baked him a sumptuous chocolate cake that he can offer his colleagues.

This is what Milan is like. A network type. Employees in central campus know him as the soothing voice on the phone when you call up, all fired up over that irritating breakdown.

Milan started mucking around with IT when he was a kid. First from a pure boyish interest, later to make a living.

He came back to Copenhagen as a 17-year old after spending most of his childhood in Serbia, because the future looked brighter here. His father, resident in Denmark, helped him get a job as a cleaning assistant at the University of Copenhagen (UCPH) where his father worked as a campus service officer.

“It is the world’s best job. That is all there is to it.”

It was a good job that allowed him to get a foothold in the labour market. And back pain, which Milan nowadays keeps down with a cocktail of exercises, physiotherapy, and aspirins. In Milan’s first period at UCPH his Danish language came back to him, which he had almost completely forgotten.

Milan educated himself in computer science at the Niels Brock college and got a job as a consultant that put him on a task for the university. He solved it so well that his former boss of UCPH’s IT department offered him a permanent position in the central IT support unit that serves Central Campus and the Faculty of Law.

“It is the world’s best job. That is all there is to it,” Milan responds to the question about the ups and downs of the job.

Have you tried restarting the computer?

Behind the partition screen it is decorated like home in Milan’s cubicle. Apart from the sugar-free coke and the painkillers there are pictures of the kids, souvenirs from Serbia like a small clock, and old tickets from memorable soccer matches.

Milan is at work early. He turns on his computer at 7 in the morning. The first thing he does is check whether the university’s phone system works. Check.

“And then I start from one end with the installations and updates that are waiting. You get a lot done in the morning because nobody disturbs you at that time of the day.”

In the course of a few hours the rest of the university wakes up, and the phones start ringing.

“The good thing about this job is that you help people on their way. It is satisfying every time. It is not just a user, but a colleague that you have helped, so they can continue their work.”

“The good thing about this job is that you help people on their way. It is satisfying every time.”

What do people call in with?

“All kinds of different stuff. Some may have been migrated to our domain, but are not hooked up to the network drive, some may not be able to get on to Eduroam, or maybe having trouble with their passwords, just to mention a couple of examples,” says Milan.

A huge flat screen up at ceiling level monitors the UCPH information systems. The symbols have to be green – if they go red you have to act fast.

“Chaotic situations are a part of our business. Suddenly the systems can go awry. A couple of summers ago the central server packed in because the cooling system in our data centre was not up to scratch.”

“And then there are many calls. You have to put yourself in the users’ situation first, and then you should explain to them the situation slowly and calmly,” says Milan, whose conversations nearly always end with a positive outcome.

“We get courses in appropriate communication. We have to be able to talk to everyone. You have to know how to handle the primadonna types, so they hear what they want to hear – and get the help they need,” Milan says. He has only once had a professor hang up on him in anger.

And as to the question whether the ‘restart the computer’ tip is often a simple solution to a complicated PC problem? He nods and smiles.