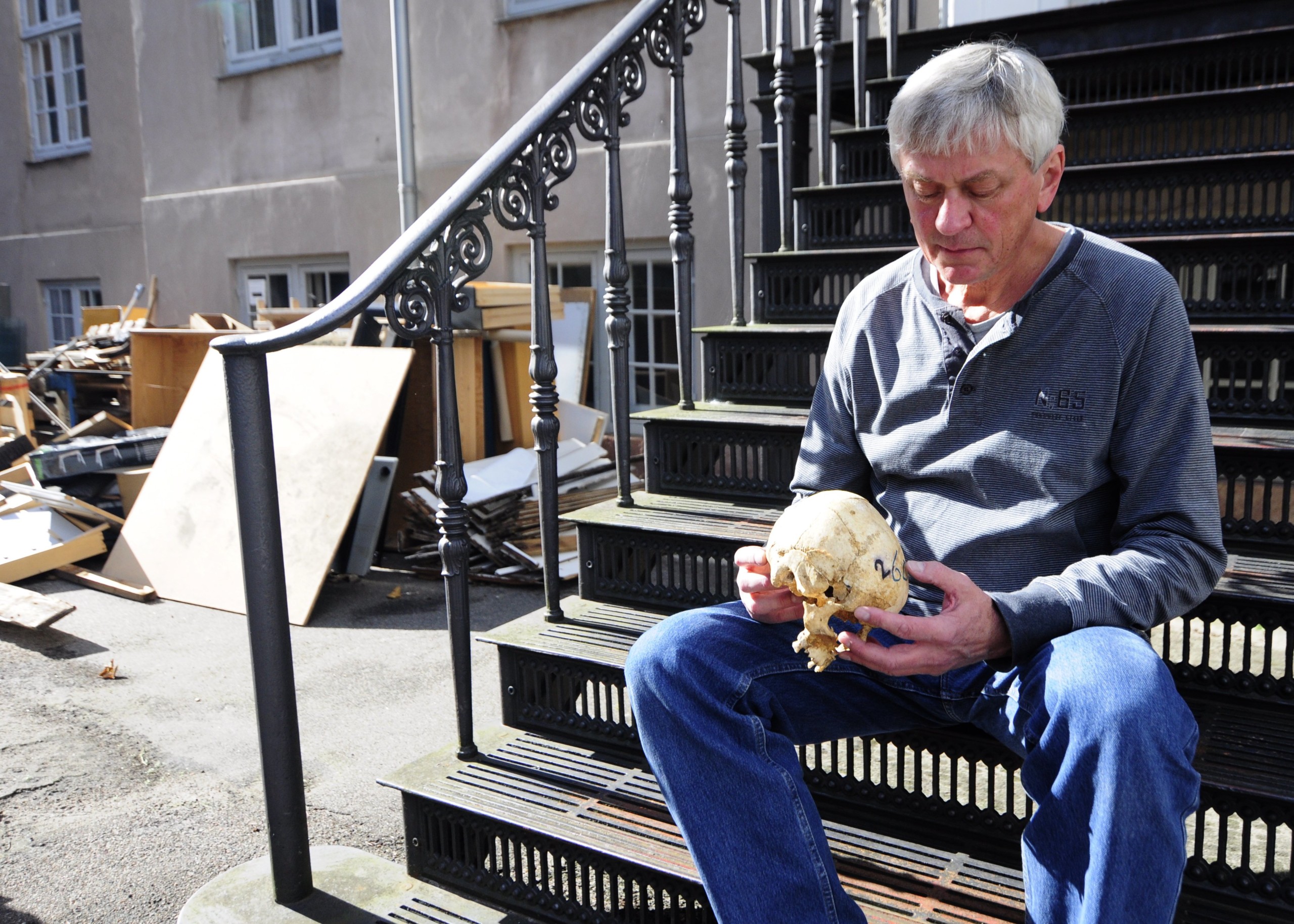 Skeletons dug up from the ruins of the Æbelholt monastery show us medieval violence, sickness, and life

He was struck down from behind with something blunt and hard, and his skull cracked.

He then lived on for several days, most likely in agony. This is what the lesions on his skull can tell us.

Maybe his injury was a battle wound, maybe it was just some kind of brawl. Maybe his friends helped him, transporting him by cart, maybe for days on end, to finally reach the monastery of Æbelholt in northern Sjælland, Denmark. We don’t know. But he was buried – no coffin, head towards the west as is the custom – in the monastery’s churchyard.

Now, 5 – 800 years later, he is one of more than 600 skeletons from the site of Æbelholt packed into cardboard boxes and crates at the University of Copenhagen’s Medical Museion.

This summer, the rain storm that hit Copenhagen engulfed the cellars of the museum, submerging our friend and his boney mates once again, this time in water.

The Abbey of Æbelholt was founded in 1170-75 on the verge of Gribskov forest. Known for its medical expertise, it functioned a bit like a hospital right up until the upheavals of the Protestant Reformation in the 1500s.

»Æbelholt was a particularly well known place for treating disease and injuries, certainly throughout Sjælland and Denmark, but also throughout the region,« explains Ion Meyer, Head of Collections at the Medical Museion.

»We cannot compare their medical expertise with today, but at the time the munks were the most knowledgeable in the areas of anatomy and surgery,« he says.

Medical treatment ranged from the extremes of trepanning, a kind of early brain surgery consisting of drilling a hole into the skull; to bloodletting; to the use of hot irons; to herbs that worked as laxatives or the opposite, herbs that induced vomiting, sleep, urine or sweat.

About half of the burials at Æbelholt were men, the rest women and infants. Five of the women had foetuses inside them.

In the Middle Ages child delivery, by caesarean section or surgery through the abdomen, was only used in extreme circumstances, often after the woman had died, according to Ion Meyer.

The position of one of these women and her foetus shows that it was expelled from her body after death and burial, a so-called post-mortal birth.

At the onset of the Protestant Reformation, the King wanted to reduce the power of the monasteries. Æbelholt was closed down. At first the buildings were used by surrounding, now protestant, parishes for services. Soon the buildings relapsed into ruin with some of the stones finding their way to the King’s nearby Frederiksborg Castle, others being taken for chimneys and walls by nearby farmers.

Three centuries later, by the 1840s, there was nothing left to be seen. The whole site had been turned into well-cultivated pasture.

»The stories lived on, but they became more and more distant« Ion Meyer retells. Folk memory of the time when Æbelholt was a major Northern European medical centre had receded.

Enter Vilhelm Møller-Christensen, a medical doctor and professor in medical history at the University of Copenhagen. The Æbelholt site had been located in 1935, and he knew that it was an important place for the treatment of disease in the Middle Ages. Maybe new medical knowledge could be applied to the older diseases found at a burial site there?

For ten years, from 1941 to 1950, he and his medical students spent their summers meticulously excavating the cemeteries. In all nearly 1,000 skeletons were found.

Some archaeologists at the time criticised the doctor and his students for their excavation methods. But their knowledge of anatomy helped them to dry and preserve vital parts of the skeletons for later analysis, explains Ion Meyer.

»I know of no other excavation where the skeletal remains have been so well taken care of and preserved,« he says.

No DNA so far

Take the bones of the inner ear for example. They are not attached to the cranium, so when a skeleton is removed by a non-expert, the ear bones typically fall through, possibly disappearing.

But these bones are important for diagnosing particular diseases, including the infection of the ear called otitis.

In the crates and boxes, the inner ear bones are in little see-through plastic bags.

Nowadays all the buzz is about finding DNA. And I ask Ion Meyer about it. Could we, with modern technology extract any DNA from the Æbelholt human remains?

»Most of the dead were buried without a coffin, and after death everything except the skeleton is transformed slowly into the surrounding organic material,« he explains.

In exceptional circumstances, say for a high ranking abbot, a stone coffin could have been used, allowing the corpse to dry out: Then hair could have been found. But this is all speculation, Ion emphasises. In the case of Æbelholt, no DNA has been found so far.

This said, newer medical advances are continuously re-applied to the skeleton collection. The doctor-excavator Møller-Christensen himself used this and other collections to test theories of leprosy and syphilis.

So all we have is the skeletons and the evidence of a time that was hard, short, violent, and from our perspective, brutish. The lay brothers who buried the dead at Æbelholt did not take any particular care that subsequent burials were not on, or even through, the remains of previous ones.

In his 1958 book about the excavation Professor Møller-Christensen quotes the inscription on a 12th century woman’s grave in St. Olai’s Church in nearby Roskilde:

You who pass with bended head, I beg you. Pray to the Lord! I am, what you will become. What you are, I have been. Stop, read and cry.