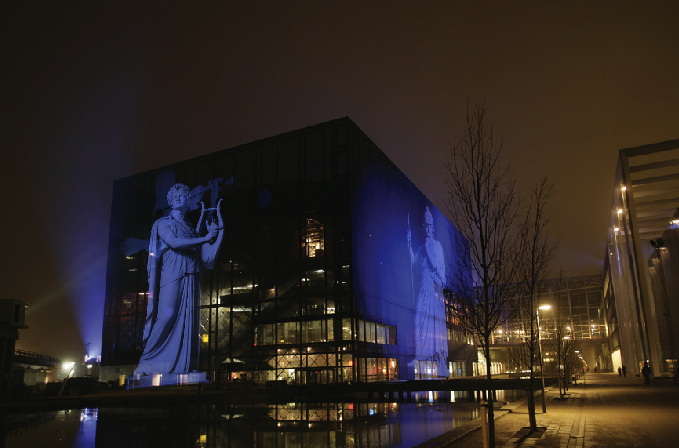 Gods Athene and Apollo will adorn the walls of DR Concert hall when University of Copenhagen celebrates the annual Commemoration on 18 November 2011
image: DR PR, photo montage by Pete Burke

University of Copenhagen will project Greek gods onto concert hall

Friday night Greek gods Apollo and Athene will be projected onto the DR Concert hall (Koncerthuset) in Amager. This is according to the design team at the University of Copenhagen.

They have been granted an opportunity to graphically decorate the façade of the big blue building for this year’s Commemoration. Apart from the two Greek gods the uni logo and Latin motto will adorn the building.

The Commemoration is an old university tradition which has been held each year 1479. It has existed in the current form since the 1906 and today it is a celebration of the founding of the university in 1479. The royal family has always participated in the event, and tomorrow is no exception. The University Post will cover the afternoon event.

The theme of the night’s decorations is inspired by the classic concept of university education and research. Greek god Apollo represents the Arts, while goddess Athene represents the Sciences. Upon entering the Commemoration’s two locations you will meet two gods » who represent the arts and sciences inspiring and influencing each other in an academic symbiosis,« according to Pete Burke of the design team.

The University Latin motto ‘Coelestem Adspcit Lucem’, which translated into English means ‘It sees the heavenly light’, will also shine in the dark of night.

»Guests seeking to experience the sublime sounds of Miss Dickow just have to follow Apollo and the light,« he explains.

A night of traditions and rock

The Commemoration is a day of traditions. The celebration will start in the afternoon in the Ceremonial Hall at Vor Frue Plads where prizes will be awarded.

The feast will then continue in evening at DR’s concert hall with a classical concert by the Danish National Chamber Orchestra and a rock concert by Tina Dickow.

Among the 700 participating guests, will be the Danish queen, Margrethe. The university elite will also participate. The guest list includes ministers, the University deans and director, as well as outstanding students and professors.

And the winners are…

As always, awards will be given out at the Commemoration. This year, a new innovation award has been introduced. It will be awarded to the student or researcher who has shown innovative abilities in connecting research with industry and business.

Also look out for the international study environment award. Maybe some institution, or professor, or even student, you know will get the honour!

Check out the research projects subjects which will be announced tomorrow, here.

It is not possible to participate in this year’s commemoration, as all invitations have been handed out, and all tickets sold out. However: stay updated with our coverage of the event.

If you are up for it, submit your student project to be officially invited for the 2014 event – and tell us your story!