The economic effects of restricting immigration – lessons from US history 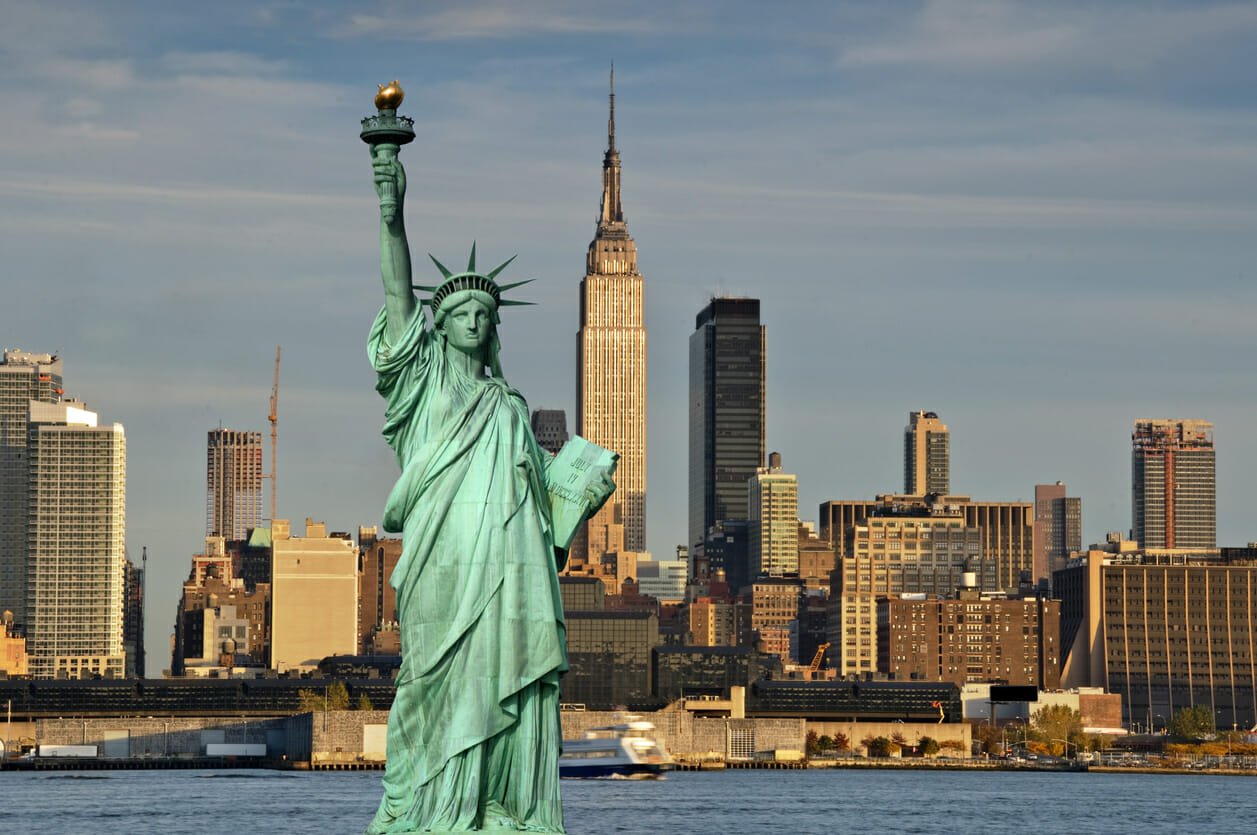 Liberty - The Statue of Liberty has become a symbol for the economic opportunities afforded to poor immigrants
image: iStock

This article was originally published on videnskab.dk in co-operation with The Conversation.

The issue of immigration – and whether or not to restrict it – is hotly debated. Promising stricter immigration laws was an important pillar of Donald Trump’s 2016 presidential campaign – and it remains one of the Trump administration’s priorities to “protect” US workers and taxpayers.

This idea reflects the argument that immigrants reduce job opportunities for US workers and cost taxpayers extra money to provide for housing and social assistance. But is this really the case? Understanding whether stricter immigration laws would benefit native workers, through better employment opportunities, less competition for jobs and a lower tax burden is a central research question for labour economists interested in evaluating the economic effects of immigration.

The US president at the time, Calvin Coolidge, signed the Immigration Act of 1924. For him, restrictive immigration was, to a large extent, for economic purposes. It was designed to keep wages and living standards high for both the existing population and the new arrivals that made it through legally. 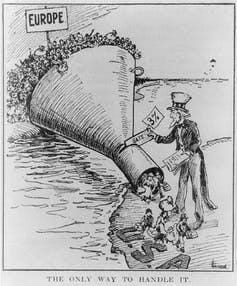 Satire - A 1921 cartoon about US immigration. (Photo: Library of Congress)

The specific design of the new quota system meant that immigration from some European source countries (such as Italy and Russia) was restricted more than from others (such as the UK). Since newly arriving immigrants tend to cluster and move to places with already existing networks, areas with larger pre-existing immigrant communities of affected nationalities (those from Italy or Russia) would expect to receive fewer immigrants after the introduction of the quota system. In light of this, we can evaluate whether immigration during the first half of the 20th century was beneficial for the average American worker and the US economy in general.

We found that natives living in areas more affected by the quota (areas where the level of immigration went down) were actually pushed into lower-wage jobs. For the average affected area, native workers experienced a 2% decline in earnings after the quota system was implemented. 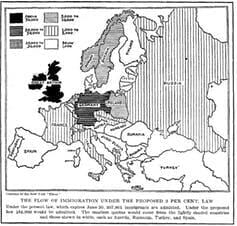 The flow of immigration under the proposed Immigration Act of 1924. (Illustration: Literary Digest, May 10 1924)

This effect, however, substantially differs by race. While the quota system led to substantial earnings losses for native-born white workers, African-American workers benefited from it. This is due to the fact that the jobs done by white native workers and immigrants each complement the other (think of it in terms of an engineer and a construction worker). African-American workers meanwhile were competing with immigrant workers for jobs.

This finding shows that immigration in the 1920s actually improved the job opportunities for native-born white workers but deteriorated them for African-American workers. Then, when the quota was introduced and the numbers of European migrants went down, African-American job prospects went up, as they replaced the missing immigrant workers in the factories.

This article was first published on ForskerZonen, a forum for scientists.

Here scientists write about their own research and research field, bring in relevant knowledge to the public debate, and communicate to a wider audience.

As such, native-born workers that have similar jobs as the arriving immigrants are more likely to lose from immigration and are more likely to gain from immigration controls. Indeed, one unintentional consequence (in the eyes of the 1920s policymakers) of the quota system was a narrowing down of the black-white earnings gap in the more affected areas during the first half of the 20th century.

This article was originally published on The Conversation. Read the original article.