The rice plant with gills 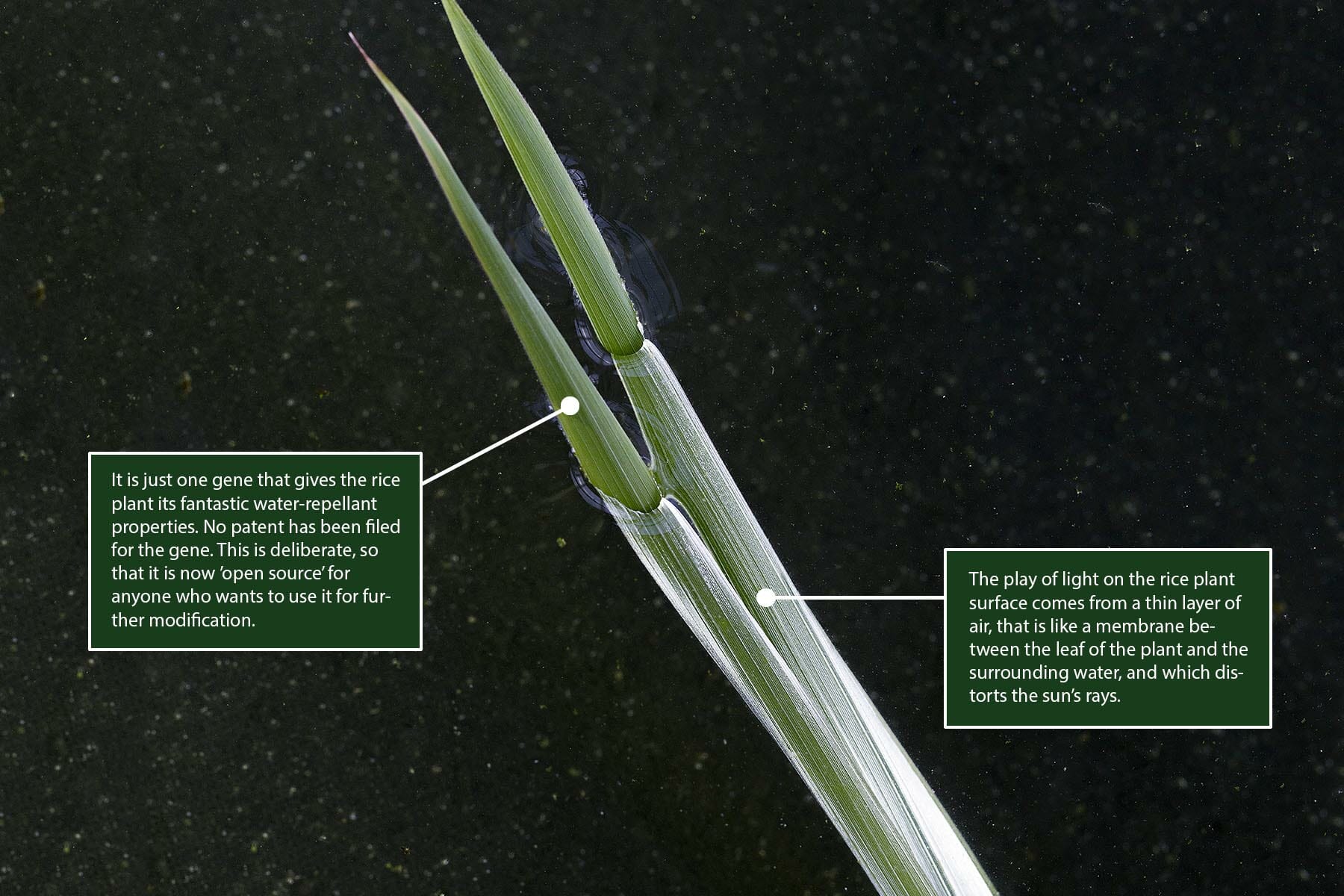 This rice plant is located in a greenhouse at the top of the pharma building in the Universitetsparken campus area. It is part of Ole Pedersen's research plants.

Research — Rice plants 'breathe' through a thin gas coating, that works like the gills of fish. UCPH researcher has helped to locate the gene in rice that makes it water resistant for days. Now he wants to solve a wet climate challenge.

Many of the world’s most important crops risk rotting in the fields if global climate changes lead to more floods that put them under water for extended periods of time.

This also applies to rice, one of mankind’s .

Ole Pedersen, professor in freshwater ecology, is involved at the very forefront of research into climate change consequences. At the same time, he is one of the researchers in the aquatic research world who knows most about why rice can tolerate being submerged under water for up to a week.

Rice plants can (only) survive a week under water

The basic explanation is that rice plants have a special nanostructure on the leaves, which creates a pocket of air in a flood. Its thickness is only a twentieth of a millimetre, and scientists call it a gas film, or coating.

With the help of some advanced micro-electrodes he developed himself, Ole Pedersen has been able to reveal some of the rice plant secrets. The professor can measure the plant’s exchange of CO2 and oxygen with its surroundings via the gas film, and this has revealed that the rice plants breathe through the gas film – very similar to the way the gills work on fish.

Professor in freshwater ecology at the Freshwater Biology Section since 2017. Employed by the University of Copenhagen since 1996. Already working on his PhD from 1994 on water and gas transport in underwater plants.

The photosynthesis can therefore continue for the rice plant for up to one week. However, if there is a major flood for, say, three weeks, the rice plants will die.

But not if it is up to people like Ole Pedersen. In the Philippines, for example,.an international centre is experimenting with moving a group of special genes (called Sub-One) from an Indian rice plant to commercial rice types. This makes them more resilient to violent and long-lasting floods, and that gives him hope.

“It’s incredible to see rice farmers in the Philippines stand by their field with the new rice variety, that has been inundated for three weeks, and they have a 30 per cent drop in yield. But on the neighbouring field where the rice farmer has used an old-fashioned variety, everything is just dead. That is why I know that this is possible,” Ole Pedersen says.

In the Philippines, the United Nations International Rice Research Institute (IRRI) has modified the rice plants, and Ole Pedersen has started a collaboration.

He is in dialogue with Australian scientists, who know a lot about relocating plant properties through selective breeding, and four years ago he started a collaboration with Japanese scientists who found the gene, Leaf Gas Film 1 (LGF1), that encloses the rice plant with the protective film. The Japanese discovery was published in the periodical New Phytologist in March 2018.

It is LGF1 that makes the minute nanostructures on the surface of the rice plant’s leaves. The nano structures make it impossible for water to penetrate the leaves, and the better the LGF1 works in crops, the more water-repellent they become. This also applies in the case of, say, wheat, if the gene is present.

Results will be seen in the fields in 10 years time

The discovery of LGF1 was particularly important because IRRI let Ole Pedersen and his collaborators know that if they could not identify the exact inheritance path that governs rice plants’ water-repellent properties, it would be impossible to proceed with the enhancement of the new flooding-tolerant rice varieties

But they succeeded, and Ole Pedersen assumes that it will take about 10 years to get the results out on the fields. Thís is the time it usually takes from the discovery of a property until the commercial cultivars or varieties are developed. The biologist describes the next stage as follows:

“We need to moved the specific characteristics of the LGF1 to the high-performing, commercial varieties, without doing it at the expense of their specialized disease resistance or their ability to absorb nitrogen, phosphorus and other things. Today we have many different varieties in South-East Asia, Japan, Africa and Central America, so we have to do it many times, and this will take some years.“