The truth about the world's oldest shark 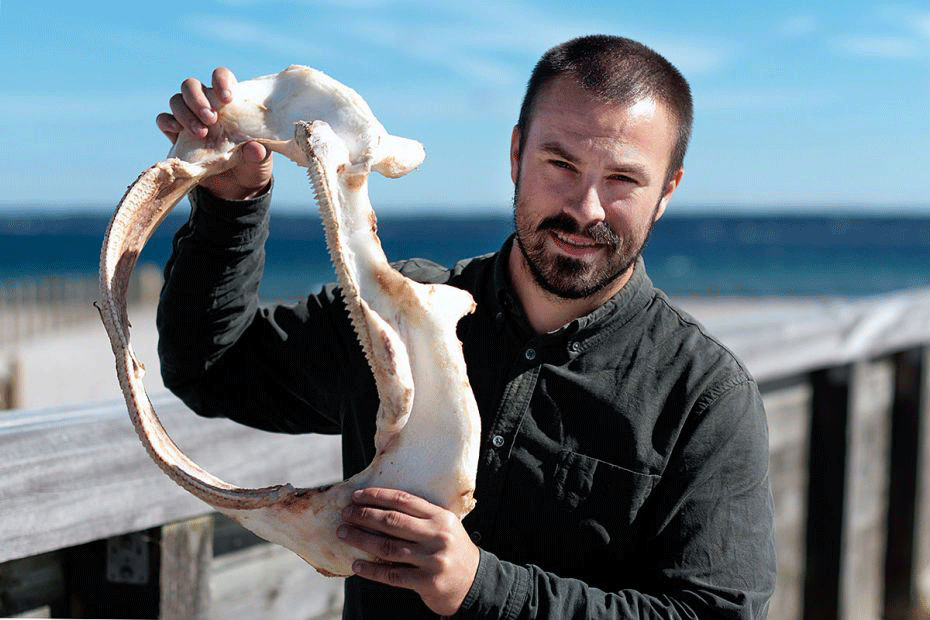 The story of a Greenland shark, with an estimated age between 272 to 512 years has gone round the world. PhD student at the University of Copenhagen Julius Nielsen talks about the efforts to estimate the shark's age, and the challenge of getting the media to understand the main message of his research.

Few researchers manage to make a scientific breakthrough that is also considered a global hit by the International media.

However a fortnight ago, this unlikely scenario was brought into being by an extremely old shark and a group of researchers from the Marine Biological Section (in Helsingør) at the University of Copenhagen (UCPH).

The researchers – including PhD student Julius Nielsen became the first to discover that the shark is hundreds of years old when it was caught off the coast of Greenland i 2013. The discovery was published in the peer-reviewed academic journal Science on 12 August.

Important nuances are getting glossed over

He talked to between 80-90 journalists in just three days in the week leading up the publication of the results in Science. The Journalists were from all kinds of media outlets. Everything from the New York Times to Press for Kids, and they wrote 1,200 articles about the findings in just 48 hours.

Julius Nielsen was satisfied with that, but according to him the journalists could have been a bit more elegant because they missed some key details.

“There is a margin of error in regards to the estimated age of the Greenland shark. Our analysis shows that we are 95 percent sure that we know its maximum lifespan and its age in an interval of 240 years, from 272 to 512 years”, he says.

A sizable section of the media decided to highlight the maximum age of one particular Greenland shark despite the researchers efforts to educate them about the nuances of the estimates and the possible margins of error.

“Even the lowest estimate with the lowest margin of error – an age of 272 years – makes the Greenland shark the longest living vertebrate and the estimate with the largest margin of error of 240 years only applies to one very old Greenland shark out of the total of 28 sharks we used in the study. All of the worlds journalists have been focusing on this one animal and some of them even want me to name it, but I refuse to do so,” Julius Nielsen says.

It all started with Julius Nielsen’s PhD project, the goal of which was to find out how old the sharks were. He was aided by his supervisor professor John Fleng Steffensen and a group of researchers.

It was quite a challenge to study the Greenland shark, partly because they live in locations that are difficult to access and also because they do not have solid bones in their bodies.

“It lives in arctic waters at a great depth and it is part of a species of shark that do not have a solid structure, but just soft cartilage. Therefor there are no growth layers – like tree-rings – that researchers can use to estimate the age of fish,” says Julius Nielsen.

The method consists of cutting out the lens of the cornea on a dead Greenland shark. The tissue in such a sample consists of proteins that have not changed throughout the shark’s life. There are no blood vessels and no metabolism in the proteins when the lens in the eye has to be transparent.

However, the lens in the eye continues to grow throughout the shark’s life and therefor the researchers need to use a tissue sample from the core of lens to find out when the shark was born. Radiocarbon dating is then used to determine the age of the tissue sample. Carbon-14 is a radioactive isotope and the rate of its decay or disintegration is known, therefor it can be used to estimate the age of the tissue.

The researchers faced a challenge because the shark swims in different locations that all have varying levels of carbon-14. Therefor the margin of error increases when trying to determine the levels of carbon-14 in the lens of the eye of a Greenland shark.

To counteract this challenge the researchers need to calibrate their readings by collecting and utilizing a greater number of samples.

This applies for the traditional carbon-14 dating method. The researchers also used another method, the so called ’bomb carbon-14 method’. It utilizes the fact that the first hydrogen bombs were exploded approximately 50 years ago and that they released large extra amounts of carbon-14 into the atmosphere. The researchers are able to directly read that change in the samples from the shark’s lenses.

Both methods have been used in the study, but are still imprecise because none of the two methods are perfect:

“The best thing would have been if we in the last 500 years with 50 year intervals had exploded some really dirty hydrogen bombs that had released a huge amount of extra carbon-14. Then we would have been able to change the title of our article from estimating the age of the Greenland sharks to establishing the age of the Greenland shark,” Julius Nielsen says with a laugh.

» To us the Greenland shark was first and foremost a mystery that we wanted to investigate. We did not know in advance that it could be the world’s oldest vertebrate, and that our findings would get so much attention around the world« Julius Nielsen, PhD researcher.

Sharks from the Greenland institute of Natural Resources

Julius Nielsen has been able to play a key role when it comes to providing a lot of specimens for the project,

Every summer since 2009 he has had a summer job working on a research boat from the Greenland Institute of Natural Resources. His work consisted of finding and measuring fish. Because of that he knew how to find the Greenland sharks needed for the project.

“The really big secret behind our success is our cooperation with the Greenland Institute of Natural Resources. Every year they monitor the fish stocks and when they do that they also bycatch Greenland sharks. Most of the 28 sharks that we used in the study are the result of bycatches,” says Julius Nielsen.

A summer job became the ticket to success

“There were a lot of interesting things that came up on the boat that I was working on and I had always known that I wanted to utilize the fact that I knew of these boats that were fishing off the coast of Greenland and catching all kinds of strange fish,” he says.

The chance came at a lecture with John Fleng Steffensen in 2011.

“He was standing there and talking about all of these fairytale like ideas about how you can estimate the age of Greenland sharks using the lenses in their eyes, and that others were already doing it. They just did not have enough sharks to complete a whole study. I told him that I had been somewhere on a boat where we had captured a large Greenland shark,” Julius Nielsen explains.

Basic research with a capital B

That resulted in John Fleng Steffensen getting in touch with Julius Nielsen. Shortly thereafter they started working. The first time was when Julius Nielsen was writing his thesis from 2012 to 2013.

During that period they were not able to decode the mystery of the age of the Greenland Shark. However they received DKK 3 million from the the research department and an aquarium in Amager to continue the project. Julius Nielsen was hired as a PhD student and started doing basic research with a capital ‘B’, he says.

This very fortunate turn of events would eventually lead to decoding the mystery of the true age of Greenland shark.