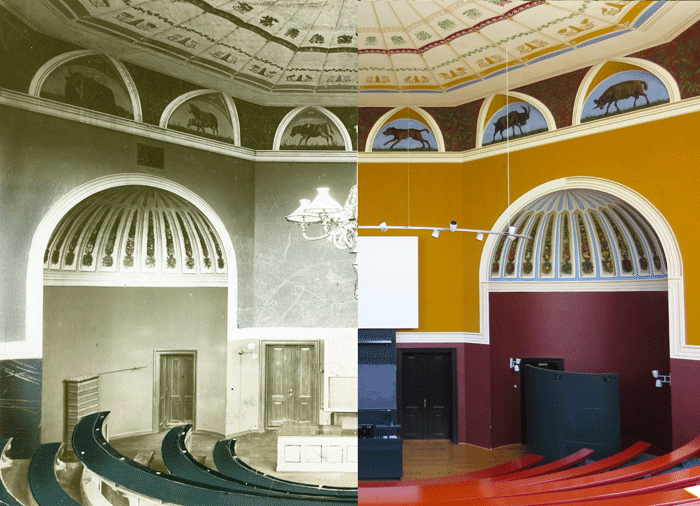 A gas explosion destroyed the original lecture hall in the year 2000, but it has since been restored with such attention to detail that the room is almost an exact replica of its former self

After the Main Lecture Hall came crashing down in 2000, artists and architects were able to rebuild it and repaint the walls and ceilings so that they now look exactly as they did when the building was built in 1858. This was possible because the original prints of the ornate paintings had been kept safely in the National Museum.

The room looks so similar now than prior to its destruction that our photo reporter was able to capture almost an identical image, even though the actual room no longer exists. In fact, the room now looks more similar to the original than it did just prior to the explosion.

“There had been restorations done to the auditorium back in the 1970s, but they had used the wrong colors, and it was hopeless to be in the auditorium. After the explosion, the Pompeiian colors were back to the way they should have been” explains Information Specialist at the SCIENCE Library Knud Høgsberg.

At 5:03 pm, 29 May in the year 2000, the entire auditorium exploded. Constructors were doing renovations in the main building on the Frederiksberg campus when someone forgot to turn off one of the gas tanks in an underground corridor. 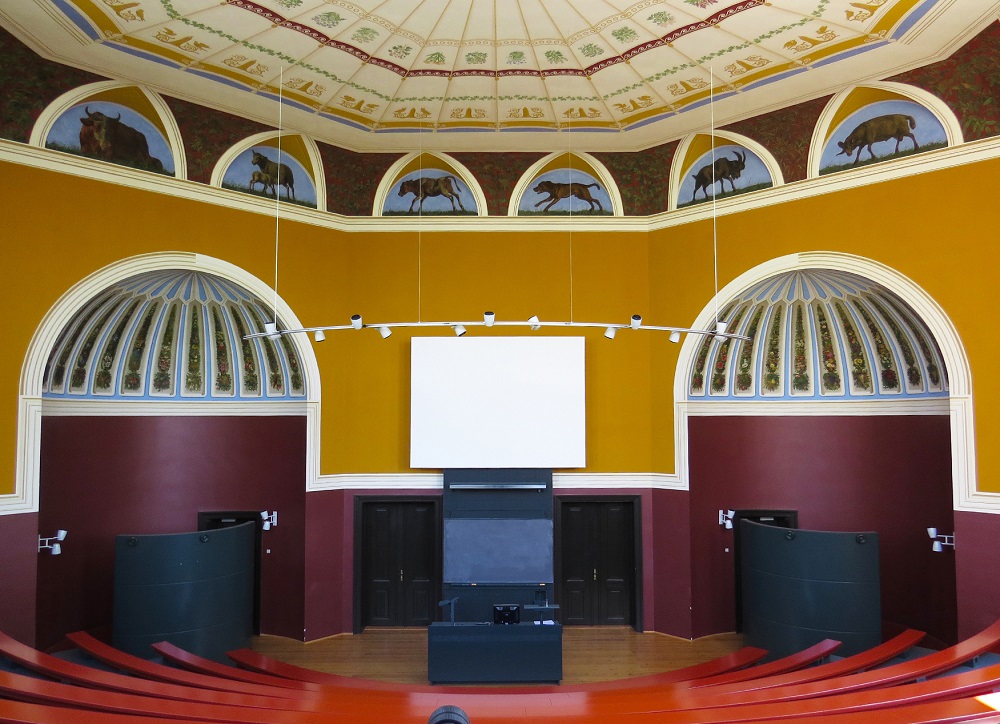 Exams were taking place nearby, but luckily no one was injured.

“I wasn’t there,” recalls Høgsberg. “I had left in the afternoon and gone home, but I heard about it from some of my colleagues. From the noise, they knew something terrible had happened. In a split second, all this happened.”

The building’s architect, Michael Gottlieb Bindesbøll worked with artist Georg Christian Hilker to design the lecture hall. Both men had spent some time in Italy and were influenced by Italian estates. Pompeii had been excavated in the mid-18th century and was the inspiration for much of the art in the Frederiksberg campus and other buildings Hilker designed at the time. 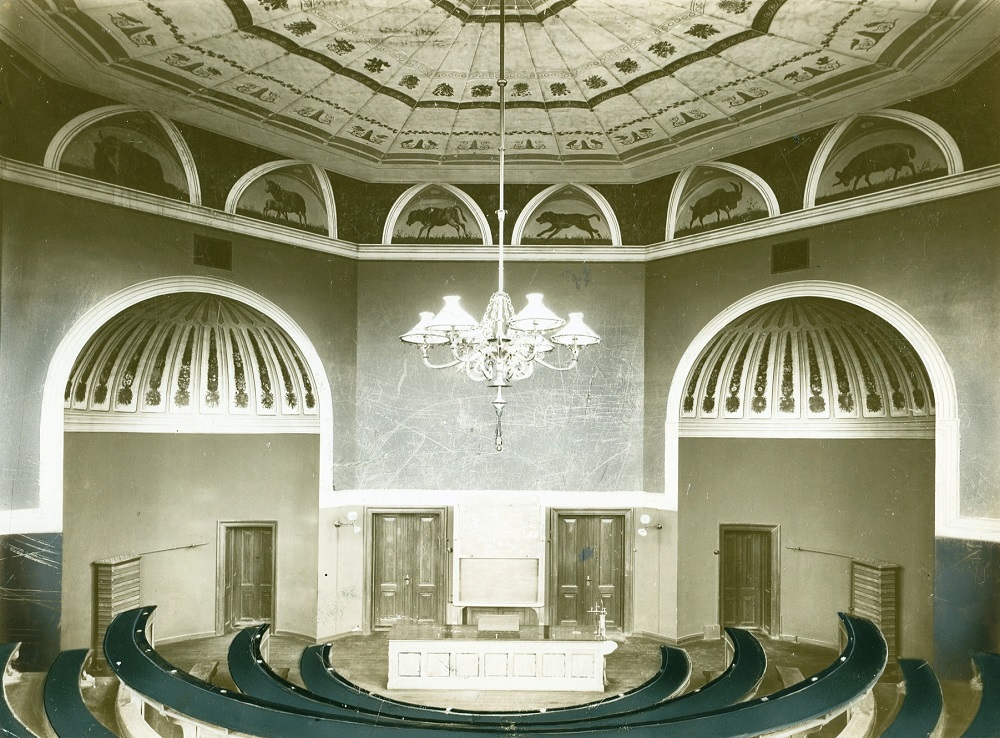 The main lecture hall at Landbohøjskolen in the early 1900s.
image: Courtesy of SCIENCE archives.

The ceiling is flat, but it is painted in a way that creates an optical illusion. It is meant to look like a sail, and the blue is the sky peeking through. Painted on the sail are 32 varieties of Denmark’s wild flora.

Hilker was responsible for the paintings in the main hall, except for the paintings of domesticated animals of the time, which were done by Andreas Peter Madsen. The paintings Danish domestic animals and give insight into how they evolved over time.

The restoration took three years and cost millions to rebuild.

The yard behind the lecture hall 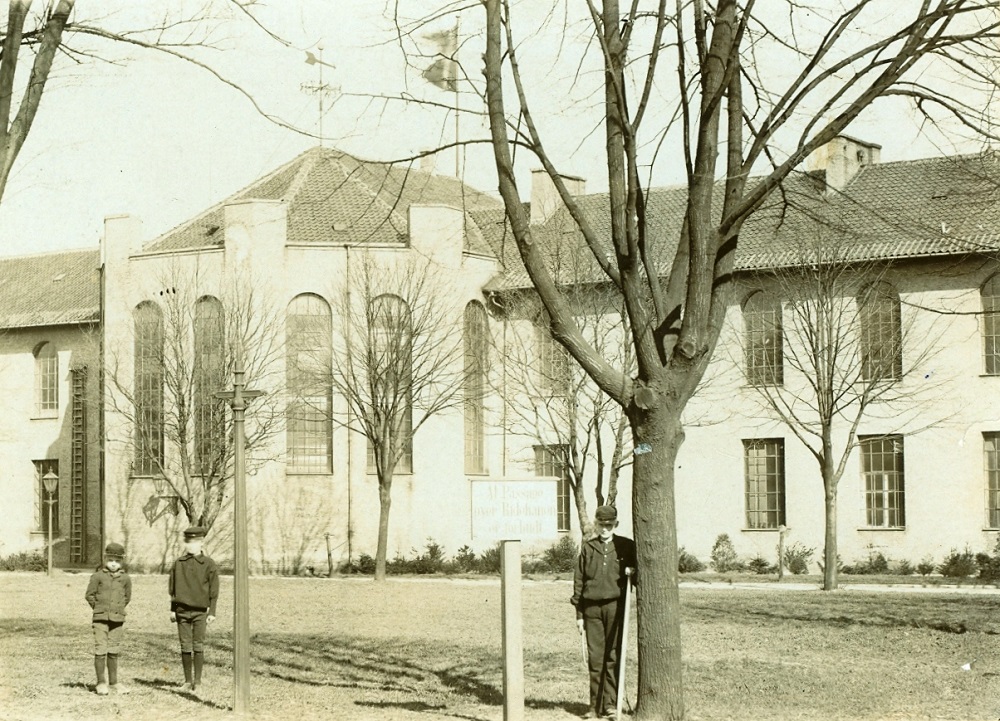 The outside of the auditorium before the explosion taken in the mid- to late-1800s.
image: Courtesy of SCIENCE archives.

The photo was likely taken shortly after the building’s construction, in the 1860s or 1870s, believes Høgsberg. At the times, horses were an integral part of daily life. “Horses were used for all transportation at the time; they were very important,” says Høgsberg.

The lawn the boys stand on was at one time a riding area, where horses were exercised. The sign next to them reads ‘All passage over the riding arena prohibited’ in Danish. The passage of time can be seen in the foliage. The small trees in the old image are the same trees that now block most of the view of the building, but the reconstruction of the protruding lecture hall after the explosion can hardly be detected. 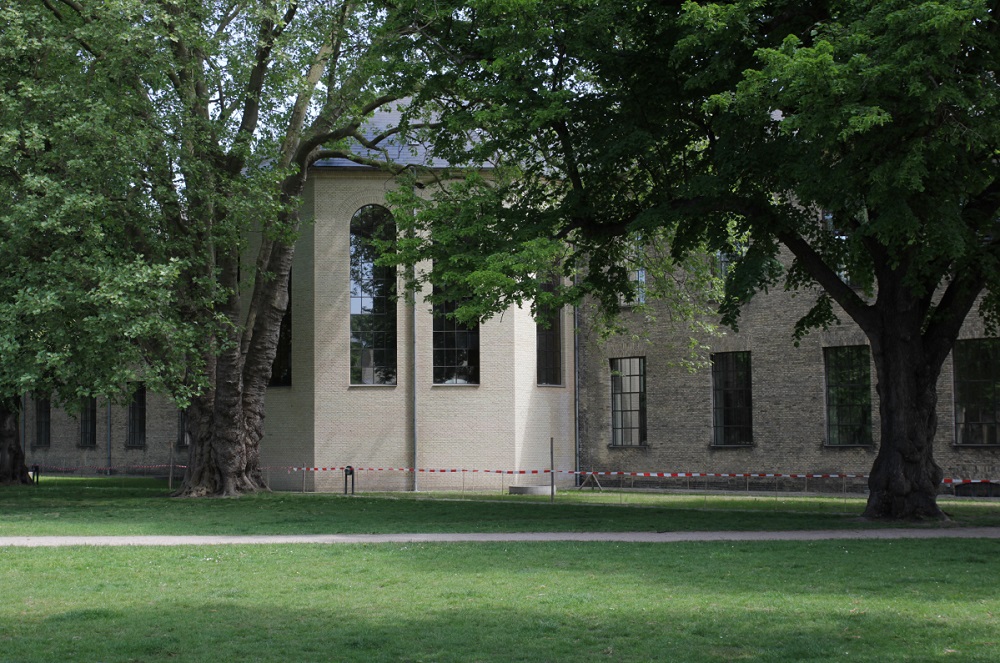 The outside of the auditorium after it was re-built.
image: Emma Flokstra Nielsson 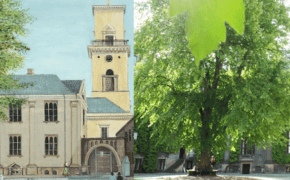 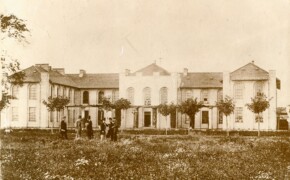 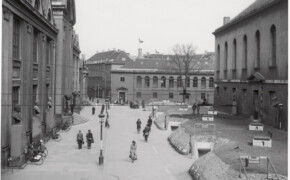 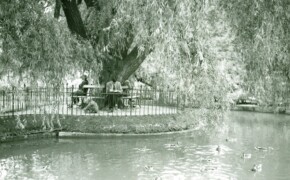 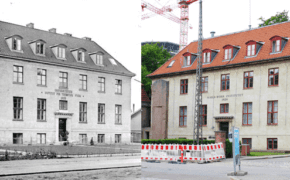