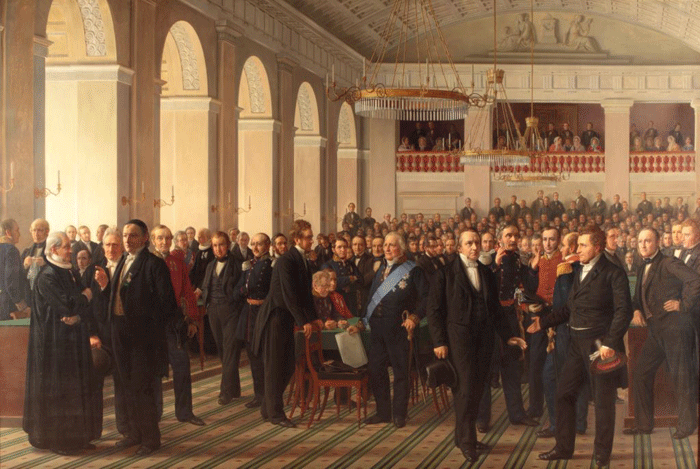 CONSTITUTION DAY - For public-sector employees, Constitution Day has traditionally been a day to kick back, relax and brush up on who was who at the constitutional congress. National employment law says the day should be treated like a holiday
image: Constantin Hansen

Freedom — Three universities have decided they will continue to recognise ‘customary holidays’, reports Avisen.dk. UCPH's administration has yet to decide whether workers will get the days off

For as far back as most can remember, public employees have been given the day off on Constitution Day, Christmas Eve and New Year’s Eve. Officially, however, the days are not included in collective bargaining agreements, and have simply been a right.

That was until last year, when the Tax Ministry, together with the Social and Interior Ministry, decided they would no longer be considered days off. According to Berlingske Business, a news outlet, citing figures from Akademikerne AC, a confederation of trade unions organising professionals, losing the three days off amounts to a pay cut on the order of 8,750 kroner annually. (Djøf, a union for solicitors and economists, reckons the amount is 7,000 kroner.)

According to Avisen.dk, a news outlet, three of the country’s eight universities – Aarhus, Syddansk and Aalborg – have decided their employees will continue to get all three days as paid holidays. Aarhus University alone employs 11,000.

Olav W Bertelsen, the academic shop steward at Aarhus University, told Avisen.dk the decision shows the administration there “respects and understands its academics, and that it is interested in more than just pursuing symbolic cuts”.

No decision yet from UCPH
The three universities were not required to let employees keep their days off. A court of arbitration ruled on 20 January that the Tax Ministry had the right to require that public employees work all three days.

The University of Copenhagen’s (UCPH) administration has yet to discuss whether it will continue to give employees the days off, according to Jasper Steen Winkel, the university’s spokesperson.