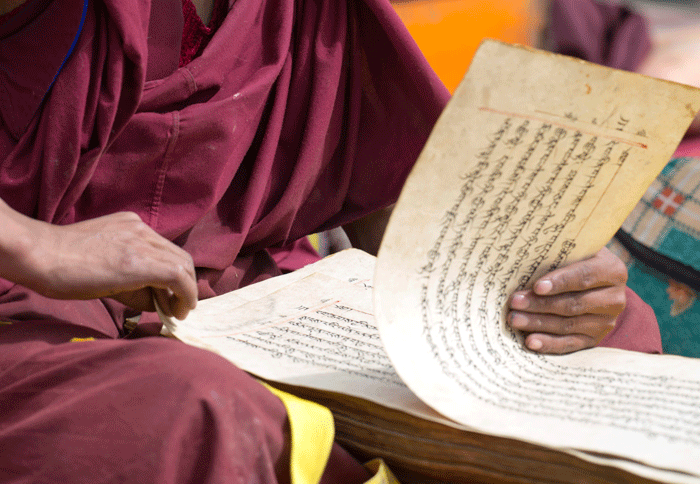 Rich tradition of Tibetan scholarship will no longer be continued in Copenhagen. Tibetan Studies scholar dismissed

This is what the University of Copenhagen will now lose, according to associate professor Jan-Ulrich Sobisch, after it Tuesday opted to shut down Tibetology, or Tibetan Studies.

“What we are going to miss here is scholars and meditators who have studied the conditions of suffering and relief from suffering for 1,200 years. There are few traditions from this time that are still alive in our time, and this, the Tibetan tradition, is one of them,” Jan-Ulrich Sobisch explains to the University Post. He received his notification that he was fired Tuesday.

“We were there, called in, at our desks. When I got the e-mail, I knew I was fired, even before I met with the head of department,” Jan-Ulrich Sobisch says to the University Post.

“We have been under pressure for a long time, and it is a terrible pressure to know that somebody, you or your colleagues, is going to be fired. It is one of my worst experiences. I am glad that it is over,” he says.

Tibetan Studies as a subject that has always been vulnerable, as it is not referable to ‘a country’, or to a country that Denmark trades with.

Denmark has, however, a particular connection to the region through the collection brought back from the Himalayas to Copenhagen by a member of the royal family, Prince Peter of Greece and Denmark (1908-1980), who was a trained anthropologist.

The closure of Tibetan Studies at the University of Copenhagen will save only 1.5 jobs, including the one of Jan-Ulrich Sobisch, but will hit 12 students, who at present do a substantial part of their studies in Tibetology.

According to Jan-Ulrich Sobisch, the decision will be a loss for Denmark.

“Tibet inherited many things from India, but with this they formed something of their own. In the 11th and 12th centuries they had mroe books than in all the universities in Europe combined,” he explains.

Jan-Ulrich Sobisch himself has in the last few years been occupied with Tibetan manuscript culture, which has universal relevance: “The way you put down thoughts, influences the way you think and express yourself”.

He summarised the legacy of Copenhagen’s Tibetology on a posting on H-net.

“Danish research of Indo-Tibetan cultures began in the 1820s, when King Frederik VI sent Rasmus Rask (1787-1832) to India to study Sanskrit. Rask brought back the first Buddhist manuscripts that would become the foundation stone of the now world famous collection of Buddhist mansucripts of the Royal Library.”

“An institute of Indian Philology was established at the university in the mid 19th century and the first Buddhist works were edited and translated. But the actual impetus for Tibetan Studies proper came from another member of the royal family, namely H.R.H. Prince Peter of Greece and Denmark (1908-1980). As a trained anthropologist, he embarked on several expeditions to the Himalayas in the 1930s, 1950s, and 1970s. Among many films and artefacts that he brought back, his most outstanding contribution was his extensive acquisition of Tibetan literature.”

The “first instructions in Tibetan language at the university were begun in the early 1950s by Prof. Kaare Grønbech. Significant contributions to Tibet’s history and literature came from his successor, Prof. Eric Haarh. Crucial for the development of Tibetan Studies at the university was also Geshe Tarab Tulku’s (1934-2004) association with Copenhagen. He taught both modern spoken and classical literary Tibetan and maintained the Tibetan collection at the Royal Library. Among his students were Flemming Faber, Per K. Sørensen, and Anne Burchardi,” Sobisch writes.

As for the students of Tibetology at the University of Copenhagen, they should stand firm on their rights as already enrolled students, says Jan-Ulrich Sobisch.

“As students the University must provide you with adequate teaching. And you can demand someone with at least PhD level to teach you,” he says.

For the 54-year old Jan-Ulrich Sobisch, the future is now uncertain. He fears that it will be hard for him to find a new job in his field.

“My job search area is Germany, Denmark and Austria, and my option now, is to go back into the mill, hoping that I get one year here, one year there. But with three kids at home, I am also considering dropping out of academia,” he says, adding however that he has already sent off his first application as teacher at a lower-level institution.