Two degrees warmer may be past the tipping point 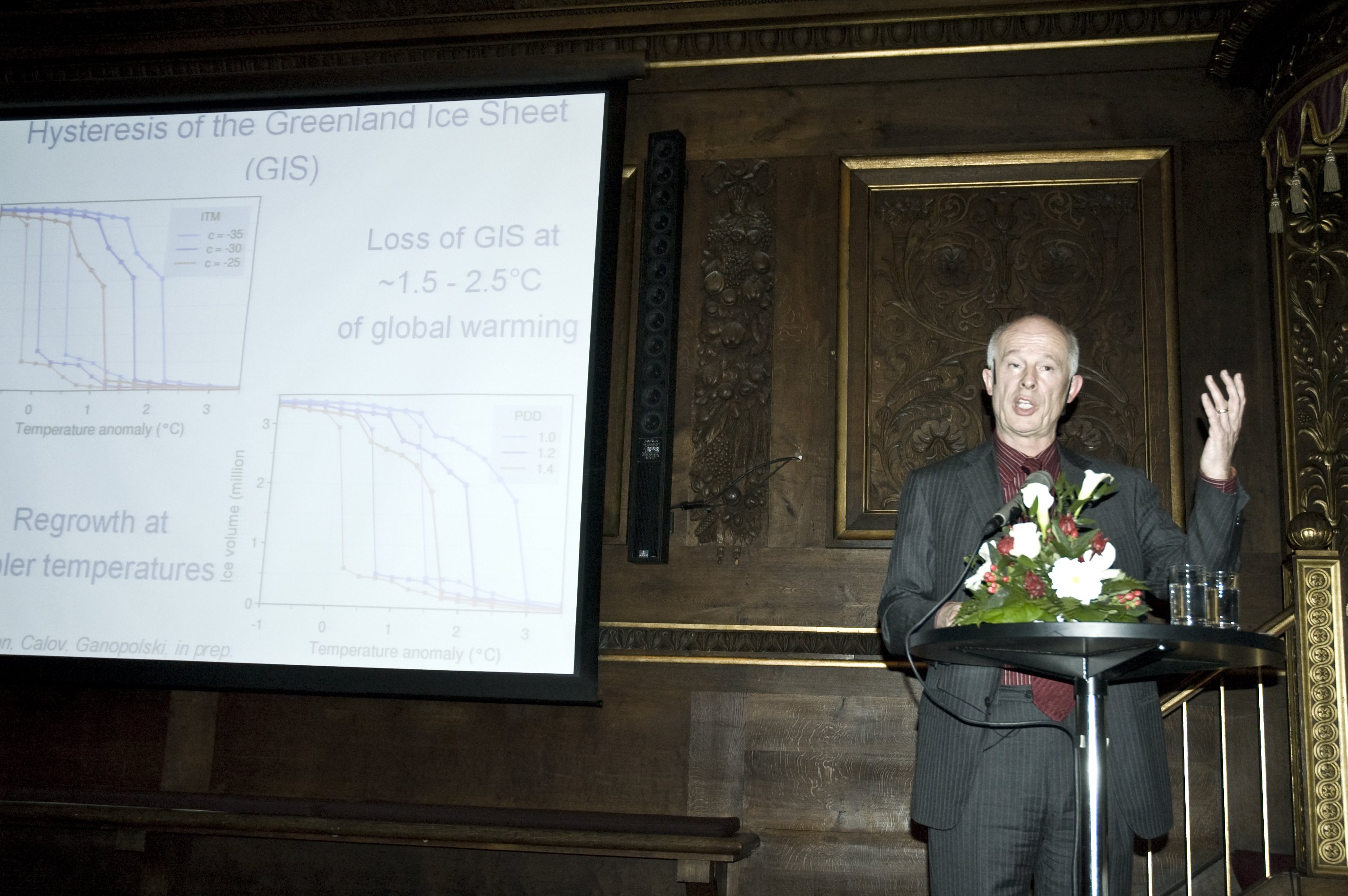 Schellnhuber warns that a temperature rise of just two degrees will cause the irreversible collapse of the Greenland ice sheet
image: Sara Hartmann Sivertsen

We are already half way between the dangerous and the catastrophic, warns German climate scientist

Two degrees Celsius. If the globe warms beyond two degrees – it is no longer a safe place to be human.

This is what most climate scientists say, and they are backed up by a report from the University of Copenhagen which synthesises the research up to the COP 15 summit. Beyond two degrees, and we will see ‘major societal and environmental disruption’.

Two degrees above pre-industrial levels is also the threshold figure that the G8 group of nations recently agreed on.

But even if two degrees is achievable, something that will demand more than a tough deal in Copenhagen and radical measures from developed and developing nations, we are balancing between safety and an irreversible warm up.

This is according to Hans Joachim Schellnhuber, climate adviser to German chancellor Angela Merkel, speaking at the University of Copenhagen Monday.

»Two degrees Celsius is a compromise, but it is at least a tangible and feasible target, so this is something,« he says, before adding:

»But the two degree guardrail is somewhere around or above the tipping point. So two degrees is not a good compromise! It is the dividing line between dangerous and catastrophic climate change’.

In climate politics, you start where you want to end up – and then work backwards. To stop global warming at two degrees Celsius, Schellnhuber’s Potsdam institute has worked out that the atmosphere can take 350 parts per million of carbon.

The world is now at 387 and climbing. Just keeping carbon emissions at the present level will slowly turn up the global thermostat by 2.8 degrees before all our lifetimes are over.

Schellnhuber’s climate mathematics drums home the logic. He shows us a ‘burning embers diagram’, where vertical stacks represent specific climate problems, like biodiversity. The stacks are yellow at the bottom, becoming yellow and into red. A horizontal line representing two degrees of warming cuts through the stacks at the point where several of the sticks are already red.

One of the burning embers is glacial melt. In the mountains of the Himalayas, what Schellnhuber calls the Third Pole, the massive loss of ice is already causing summer melt damage downstream, and irreversible change. Melting ice in the Himalayas, the Antarctic, and on the Greenland ice cap, will flow into the sea, swamping low-lying cities, deltas and dikes.

According to Schellnhuber, one of the major landmarks in current research, and already with direct policy implications, is the proven direct correlation between carbon levels and warming. The earth contains 750 gigatons of atmospheric carbon.

»In effect nature has done us a favour, it is a very simple relationship, and politicians can no longer hide behind the complexity of the issues. So we can say to them. If we want to achieve a 2/3 chance of holding these two degrees, we must stay at 750 gigatons.«

The longer, the harsher

Nations at the COP 15 summit in the Bella Centre are right now forced to solve what in game theory is known as a prisoner’s dilemma. In this ‘game’ it is the stable strategy of each nation to let the others do the decarbonising, explains Schellnhuber.

They are forced to face the question of ‘who will first give up the threat of carbonising the world?’.
In the meantime, the longer nations delay a global deal to reduce carbon emissions, the harsher the measures required.

If Copenhagen is ‘incredibly successful’, Schellnhuber explains, and global carbon emissions peak at 2011, then nations have to reduce emissions by a small percentage each year. But if the peak is only a few years later, then the necessary cuts in emissions will be up to 9 per cent a year, a level which is neither economically nor politically feasible.

Eternity is a long time

Given the interlinking problems of mitigating and adapting to climate change while developing the third world, the most effective solution, argues Schellnhuber, is a global scheme of trading in emissions coupled with a EUR 100 billion transfer of emission rights to the poorest countries.

This will allow for the development of their economies, penalising the rich nations for the global cost of its fossil-fuelled wealth.

In the meantime, all hopes are directed towards the negotiators in the Bella Centre in Copenhagen. The Antarctic ice is cleaving off into the sea, and Greenland is literally becoming green land.

»With an additional two degrees Celsius, the Greenland ice sheet will collapse. Maybe it will happen over the course of a whole century, but it will happen irreversibly,« Schellnhuber says.

He then smiles and quotes Woody Allen:
But then you know, ‘eternity lasts a very long time, particularly towards the end.’