War changed everything for Syrian student 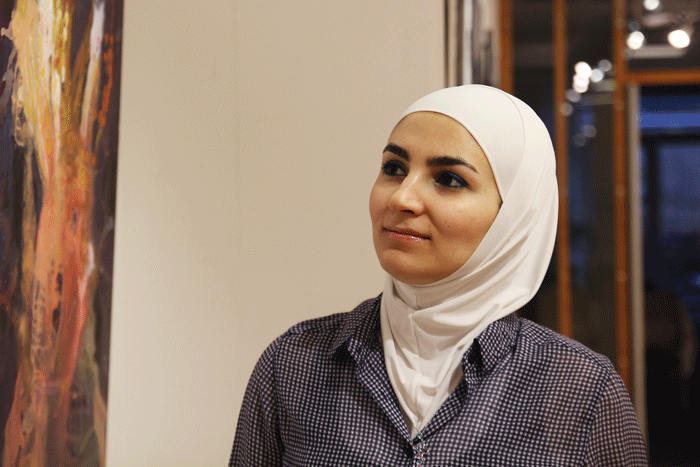 Nada escaped a homeland ravaged by civil war. Now she is finishing her pharmaceutical studies at the University of Copenhagen

‘”People get really surprised when I come here to campus, and tend to doubt my skills. But I tell them that if the University of Copenhagen accepted me, it’s because I am qualified to be here.”

Before the Syrian conflict, Nada Alkis, studied Pharmaceutical Science at her local university.

She now only has pictures of this life. Now distant, and on her phone: Crowded, colourful streets filled with young people enjoying modern nightlife, big shopping malls, restaurants, and beautiful old houses. A life that does not exist anymore.

“It started in another area, but after a year it was near us. There were small demonstrations, but some people did not want them there. They were shot by the police. It was like that every day, it was dangerous. Some people stayed there surviving until the last breath because they had no other place to go,” she explains to the University Post.

That summer, like every year, Nada and her family went to Turkey to visit their relatives. While in Turkey, they received a phone call from Damascus. Their neighborhood was being bombed and shootings were occurring everywhere. It was now too dangerous to go back home.

”I have two or three photos of my childhood, by luck. Everything else. All my childhood memories. Lost.”

“‘Our house was totally destroyed. All of the area was destroyed and there were bombings all the time.” Nada was left with only the luggage she had prepared for a couple of weeks’ holiday. ”I have two or three photos of my childhood, by luck. Everything else. All my childhood memories. Lost.”

Forced to start a new life in Istanbul, opportunities for Syrian refugees were minimal.

“When my big sister, who is also a pharmacist, tried to work, she had to do it for 10 hours a day and getting a very small payment. Less than what you could make in any other kind of employment.”

After a year, Nada took the risk and returned to Syria to finish her studies. It was then, during her chaotic life as a student in a country at war, she met Yaseen, who later became her husband. Together they made the decision to flee the country.

“A bomb fell minutes later in the exact place where I was just standing. It was impossible to stay.”

Syrian student assistant: Scared for her family and friends

Her husband traveled to Greece, and then came to Denmark. Later she joined him and both were granted refugee status.

After Nada arrived in Denmark, she joined a group of Danes that help newcomers adjust to life in a foreign country. This, she says, helped ease the culture shock and allowed her to meet people who remain her friends.

Nada’s process to get accepted at the University of Copenhagen was complex. It was, after all, one of the first cases that the university had and there was confusion as to whether she was allowed to study in Denmark.

“I’d like to tell Danish people who misunderstand our situation that it is okay to help others. We are coming from dangerous situations, from a war. All we want is a normal life.”

”At first, it was unclear for the municipality and for the university if I could be a student, because of my situation. Thankfully I sent the application on time, but it took a couple of extra months for them to finally accept me. It was a relief to finally get in. I was so happy. Now, for everybody, I am a student.”

While most of her new experiences have been joyful, she has also encountered difficulties when it comes to the perception that some people have of her and other Syrians.

”We, Syrians, are seen wrongly here. They have misunderstood our lives. They think we are just stupid people. I’d like to tell Danish people who misunderstand our situation that it is okay to help others. We are coming from dangerous situations, from a war. All we want is a normal life. It’s not as if we want to go shopping or traveling, or have a wealthy life and all that stuff. We just want a normal, basic life. Just like me, now I am living part of my life as a student and this is helping me a lot,” she says, before adding: “Give the others a chance. Don’t treat them like they come from another planet.”

Nada has changed everything she expected from a life as a refugee in Europe.

”Life is about learning and I am here to prepare myself. Here, I am learning from well-educated people and getting experience from them. This opportunity at the University of Copenhagen changed my life. It has changed everything.”

She already has a contact at Novo Nordisk through the Mentor program.

Before the war, Nada never thought about living abroad and being away from her country. She had plans to travel and see the world, but Syria was, and still is, her home. When peace comes, Nada and her husband plan want to go back to Syria and rebuild their country.

”This opportunity has made me stronger. The University of Copenhagen is my treasure. Denmark is a treasure for me.”