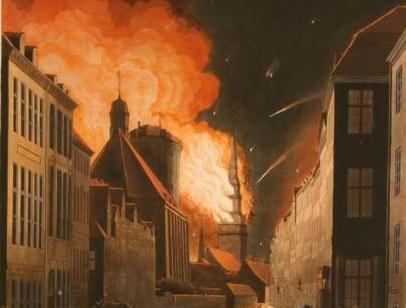 Danish painter C. W. Eckersberg’s painting of the spire of the Church of Our Lady on fire after the British attack in 1807
image: Wikimedia Commons

You walk the halls of the University of Copenhagen, read its research and maybe your diploma will show its logo. But what do you really know about this more than 500-year-old institution and its history? It is time to brush up on your UCPH trivia

The University of Copenhagen is one of Scandinavia’s oldest and largest, and one of the best-ranked and well-known institutions in Northern Europe.

So any time is a good time to dig into into the archives to find out more about this … paragon of academia! The University Post talked to historian Mia Münster-Swendsen, Professor of Medieval History at Roskilde University for her take on what are significant dates in our history. So, here are her top ten events in the history of the University of Copenhagen (UCPH):

Let’s begin with the beginning: The university was inaugurated in 1479 in the Church of our Lady after King Christian I had received permission from the pope to do so during his visit to Rome in 1475.

”A papal permission had been granted earlier, to King Eric of Pomerania in 1419, but for some reasons, the University never materialized”, says Mia Münster-Swendsen.

If the University of Copenhagen had followed the papal permission of 1419, it would be the oldest in Scandinavia. Instead Uppsala (1477) nipped us to the bud.

The university at the time had four faculties: Theology, Law, Medicine, and Philosophy.

In the years 1533-36 a civil war known as Grevens Fejde (The Count’s Feud) raged in Denmark, also affecting the University.

”The University institution breaks down and ceases to exist”, Mia Münster-Swendsen says.

The civil war, conducted between between Catholics and Lutherans, results in victory for the Lutherans and the Reformation of the Danish Church. In 1537, the University is re-established by the Lutherans.

At this point, ”the main purpose of the University is to educate the new Lutheran priesthood”, Mia Münster-Swendsen explains. ”The main seal, which is used in the current logo, is from this date”.

1728 marks a tragic moment in the history of the University of Copenhagen. In the course of three days in October, a great fire burns down about 47 per cent of medieval Copenhagen. The University Library is among the buildings that are destroyed.

What a let down!

In 1807, destruction continues as the British bombard Copenhagen from ships during the Napoleonic Wars.

”The English incendiary bombardment of Copenhagen ruins most of the University’s buildings,” says Mia Münster-Swendsen.

The bombardment included the first use of Congreve Rockets – an early missile – which caused fires. These rockets were inspired by the Kingdom of Mysore’s use of them against the British in India.

Due to the civilian evacuation, the normal firefighting arrangements were ineffective; over a thousand buildings were burned. You can still see cannonballs embedded in some walls in Copenhagen.

1850: The divorce of the natural sciences and the humanities

As Mia Münster-Swendsen explains, ”the natural sciences are divorced from the humanities and form their own faculty. The two were originally part of the Philosophical Faculty”.

In 1877, Nielsine Nielsen is the first woman enrolled as a student at the University of Copenhagen, studying medicine.

”Though not without opposition from more reactionary professors and co-students”, Mia Münster-Swendsen remarks.

The student rebellion which started in Paris also finds its way to Copenhagen in the late 1960s. The students protest against the professorial power and are ultimately successful, resulting in the University Act of 1970.

”The University Act of 1970 grants the students significant influence on the running of the university”, explains Mia Münster-Swendsen.

See this video showing the student rebellion of 1968. Student Finn Ejnar Madsen addresses the professors at the annual university gala.

More recently, there has been a series of new charters for the University of Copenhagen, the most important, according to Mia Münster-Swendsen, being the University Act of 2003.

”The University Act of 2003 abolishes the academic autonomy and replaces the democratically elected Senate with a board with a majority of external members. From then on, all members of the executive layer of the administration are appointed in a top-down process, rather than elected by students and staff”, Mia Münster-Swendsen says.

And now the final point on our list of all you need to know as a patriotic supporter of the University of Copenhagen.

Did you know that our favourite university has housed no less than 8 Nobel laureates since Niels Finsen, the first recipient of a Nobel prize in 1903?

The most famous UCPH Nobel laureate is Niels Bohr who received the Nobel Prize in physics in 1922.

After this there is only one thing left to say. As the University’s motto with the eagle says in Latin: Coelestem adspicit lucem.

It [the eagle, ed.] sees the celestial light!