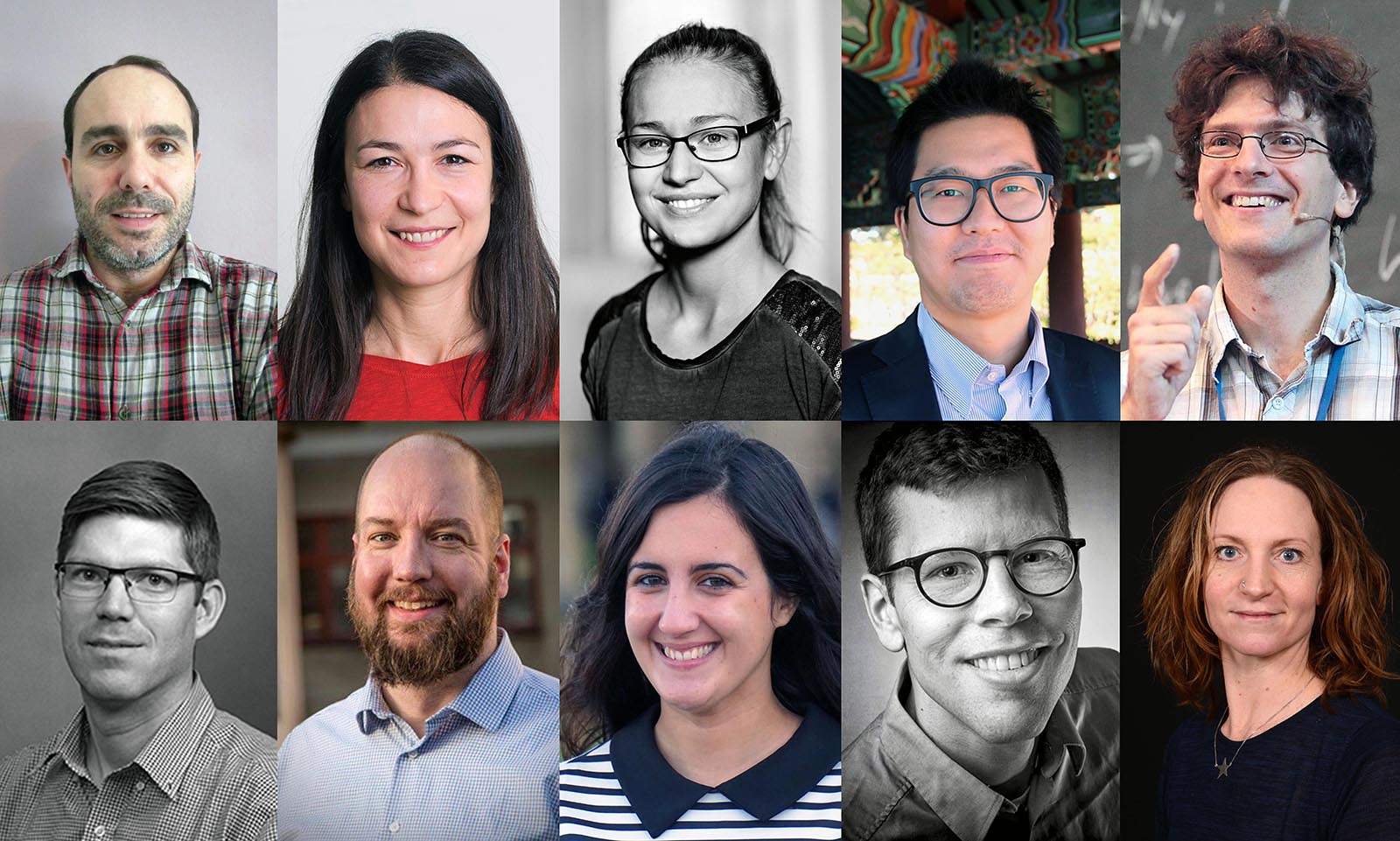 10 out of the 11 researchers from the University of Copenhagen are from the Faculty of Science. The names are listed in the fact box.
image: KU - grafik Anders Fjeldberg

Grants — The Faculty of Science at the University of Copenhagen has done well this year in terms of getting funding from the Villum Fonden's Young Investigator Programme. 10 out of the 18 young grant recipients are from this faculty.

The  has granted DKK 153 million this year to a total of 18 young talented researchers from four Danish universities: The University of Copenhagen (UCPH), Roskilde University, University of Southern Denmark and Aalborg University.

The young researchers’ projects cover a large range of topics. One of them, for example, is doing work on ensuring clean water, another is working on black holes, while a third is working on the poison systems of the cone snail at the bottom of the ocean.The money is from the Villum Fonden’s so-called Young Investigator Programme, with 10 out of the 18 recipients being assistant or associate professors at the Faculty of Science and one more scientist (number eleven) employed at the Faculty of Health and Medical Sciences at UCPH.

The VILLUM Young Investigator Awards, according to the Villum Fonden, are to support “particularly talented, younger researchers in technical and science research with the ambition to create their own, independent research profiles.”

Since 2012, the program has awarded the following:

Young scientists out of the shadows

The Villum Fonden’s Young Investigator Programme was set up in 2012 to promote younger researchers who would otherwise be in the shadow of more well-established lecturers and professors, according to a press release from nyheder.ku.dk.

The projects typically run over three to five years, and Executive Director Lars Hansen of the Villum Fonden hopes that the funds will allow young researchers to concentrate on their own research areas and that it will lead to new, exciting knowledge for the benefit of society.

Scientist from Health and Medical Sciences also got grant

Another associate professor, Vito Foderà from the Department of Pharmacy at the Faculty of Health and Medical Sciences, also obtained a grant of DKK 8.5m. So the University of Copenhagen has in total got 11 out of the 18 grants.

Together with the other Young Investigator recipients, the 11 UCPH scientists received the honours at the Villum Fonden’s annual event on Tuesday, 23rd January, at the Royal Library (Black Diamond).

The Villum Fonden has a website about the event that presents the individual 18 researchers.

The 11 scientists and their projects

Below, the 11 university researchers have made a short description of their projects in English. The text is taken from the Villum Fonden website. See the original document here, where you can also read about the other projects that have been awarded with a grant.

Giorgos Leloudas, assistant professor, Niels Bohr Institute
Granted: DKK 9,9m.
STING: Studying Transients in the Nuclei of Galaxies: »STING will study the most extreme objects in the Universe: gigantic black holes located in the centres of galaxies. While these objects are normally invisible, they can be observed when they briefly interact with their environment. By studying such transient phenomena, STING will address questions fundamental for both the physics of black holes and the evolution of galaxies. The project will run at the Niels Bohr Institute and the grant will fund one postdoc and one PhD student.«

Lars E. Kristensen, assistant professor, Niels Bohr Instituttet
Granted: DKK 9,4m.
Unravelling the complex and prebiotic chemistry of star-forming regions: »Planetary systems, such as the Solar System, mainly form in large molecular clouds. These clouds show an incredibly rich organic chemistry which may imprint on the forming planets. Through observations with the most powerful radio telescopes on Earth, this project will quantify the role of the external environment on the chemical richness in forming planetary systems, both in our own Milky Way Galaxy and in the distant Universe. The grant will fund the recipient, two PhD students and a postdoc.«

Markus Ahlers, assistant professort, Niels Bohr Institute
Granted: DKK 7,3m
Deciphering Cosmic Neutrinos with Multi-Messenger Astronomy: »One of the most exciting recent results in astronomy is the detection of high-energy neutrinos by the IceCube Observatory in Antarctica. The origin of these neutrinos is yet unknown. Astrophysical neutrinos are produced along with high-energy photons (gamma rays) via collisions of cosmic rays with gas and radiation. This project aims to identify neutrino sources via innovative IceCube data analyses that are tailored to multi-messenger sources. The grant will fund one PhD student and two postdocs.«

Helena Safavi-Hemami, assistant professor, Department of Biology
Granted: DKK 9,5m.
Evolution-Guided Discovery of Novel Receptor Ligands from Animal Venoms: »Predatory marine cone snails use diverse toxins to capture prey. These conotoxins target receptors in the prey’s nervous and sensory system with remarkable selec – tivity. This project will identify and characterise a large number of novel conotoxins and utilise this data to provide unique insight into the evolution of toxin ligands and their receptor targets. The grant will fund the training of one PhD student, one postdoc, equipment and exchange with international collaborators.«

Ida Moltke, assistant professor, Department of Biology
Granted: DKK 5m.
Detecting and investigating natural selection driven by epidemics: »The aim of the project is to develop methods to detect evidence of selection favouring disease-protecting genetic variants and to use these methods to investigate if such selection has acted during recent epidemics of diseases like plague and Ebola. The main purpose is to gain insight into the role of epidemics in evolution. However, the project may also offer insight into how the diseases can be prevented in the future. The grant will fund two postdocs and the generation of data.«

Jiwoong Lee, assistant professor, Department of Chemistry
Granted: DKK 7,4m.
Water: Divide and Conquer (Split and Purify): »Water is the most important molecule on Earth. All forms of life consist of water, which also provides the essential environment for proliferation of life. However, recent global climate change is seemingly accelerating the unpredictability of secure water supply sources. This project will provide a new Catalytic Desalination Process by Diamine and Carbon Dioxide. The grant will fund two PhD students and one postdoc.«

María Escudero-Escribano, assistant professor, Department of Chemistry
Granted: DKK 10m.
Atomic ensembles for clean energy and synthesis (AtomSyn): »Electro catalysis is essential for the development of a green economy based on clean energy and sustainable chemical synthesis. The main purpose of AtomSyn is to understand and tune the selectivity of new “dream” electrochemical reactions by atomic-scale control of the geometric structure of the catalyst surface. This approach will allow us to convert greenhouse gases into fuels as well as synthesise high-value chemicals. The grant will fund three PhD students, two postdocs and equipment.«

Kristoffer Szilas, assistant professor, Department of Geosciences and Natural Resource Management
Granted: 7,4m.
A partial cumulate origin of the subcontinental lithospheric mantle: »The project will investigate the origin of enigmatic olivine-rich rocks (peridotites), which occur as km-scale inclusions within 3600 to 3000 million-year-old continental crust in Greenland. A detailed geochemical study will provide new constraints on the formation of the first continents, as well as on the initiation of plate tectonic processes which is unique to planet Earth. The grant will fund one PhD student and one postdoc, equipment and fieldwork in Greenland.«

Jonas Peters, associate professor, Department of Mathematical Sciences
Granted: DKK 8,2m.
Causal Learning in Real World Applications: » In causality, we want to understand how a system reacts under interventions (e.g., in gene knock-out experiments). These questions go beyond statistical dependences and cannot be answered by standard methods from statistics. Causal models are stable with respect to changes in the environment, a property that will help us to learn causal structures from data. Together with two PhD students and one postdoc we will apply our research in earth system science, biogeography, and computational biology

Vito Foderà, associate professor, Institut for Farmaci
Granted: DKK 8,5m.
Protein Superstructures as Smart Biomaterials (ProSmart): »Protein superstructures hold a great potential as new biomaterials in areas such as tissue engineering and drug delivery. This project aims at unravelling the role of intermolecular interactions in controlling the growth, structure and properties of protein superstructures. The project will provide a novel platform for the design and realisation of tailored protein-based materials. The grant will fund two postdocs, one PhD student and equipment.«