Students sleeping in front of the parliament in sub-zero temperatures to protest the law.
image: Julie Madsen

Begrænsning — In the beginning of January, adjustments were made to the education cap. Students are now able to study for a new free university degree six years after their final exam. According to the Minister for Higher Education and Science, Søren Pind, the new agreement will affect almost a thousand students.

The criticism of the government’s so-called has been massive – opposition parties have  voiced their opinions on the matter and so have the more than 80,000 Danes that protested by signing a petition against the proposed law.

The education cap was officially approved by the parliament as law, at the end 2016, but changes were already being made to it in January 2017. As of today, it is possible to study for a new university degree in another field at the same or higher level, six years after a student has completed their final exam.

However, there has been a lot of debate about how many students would be affected by the new education agreement. During the summer of 2016, a memorandum from the Ministry of Higher Education and Science stated that 2,523 students began studying at university level in 2014, in a new field, despite already having a bachelors or master’s degree in another field.

Such a large number of students will not be affected after adjustments were made to the law earlier this year, according to Søren Pind. In an answer to a question posed by the Ministry of Higher Education and Science, he writes that statistically 1,800 people have started a new university level education program, six years after finishing their previous degree.

Of those, it is estimated that about half – approximately 900 students – will be affected by the education cap, when you also take other factors in to consideration,  including dispensation options, etc.

Financing the agreement about unemployment benefits

The education cap was introduced to finance a political deal about unemployment benefits from 2015. The cap was criticized, among other things, for being introduced on short notice, only six months before it went into effect, which meant that a number of students would be prevented from studying for a degree in another field after they had finished their bachelor’s degree.

For that same reason, the Socialist People’s Party’s Jakob Mark has asked the Minister for Higher Education and Science about the cost of postponing the education cap until the summer of 2018.

If the law limiting people’s option of having university level degrees from two different fields is postponed, until the summer of 2018, it will mean that the government will miss DKK 160 million that are needed to finance the agreement about unemployment benefits for 2017 to 2020, according to the Minister for Higher Education and Science, Søren Pind. 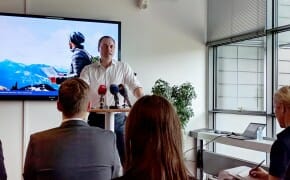 Ahlers, Minister for Education, to ease up on students (slightly)