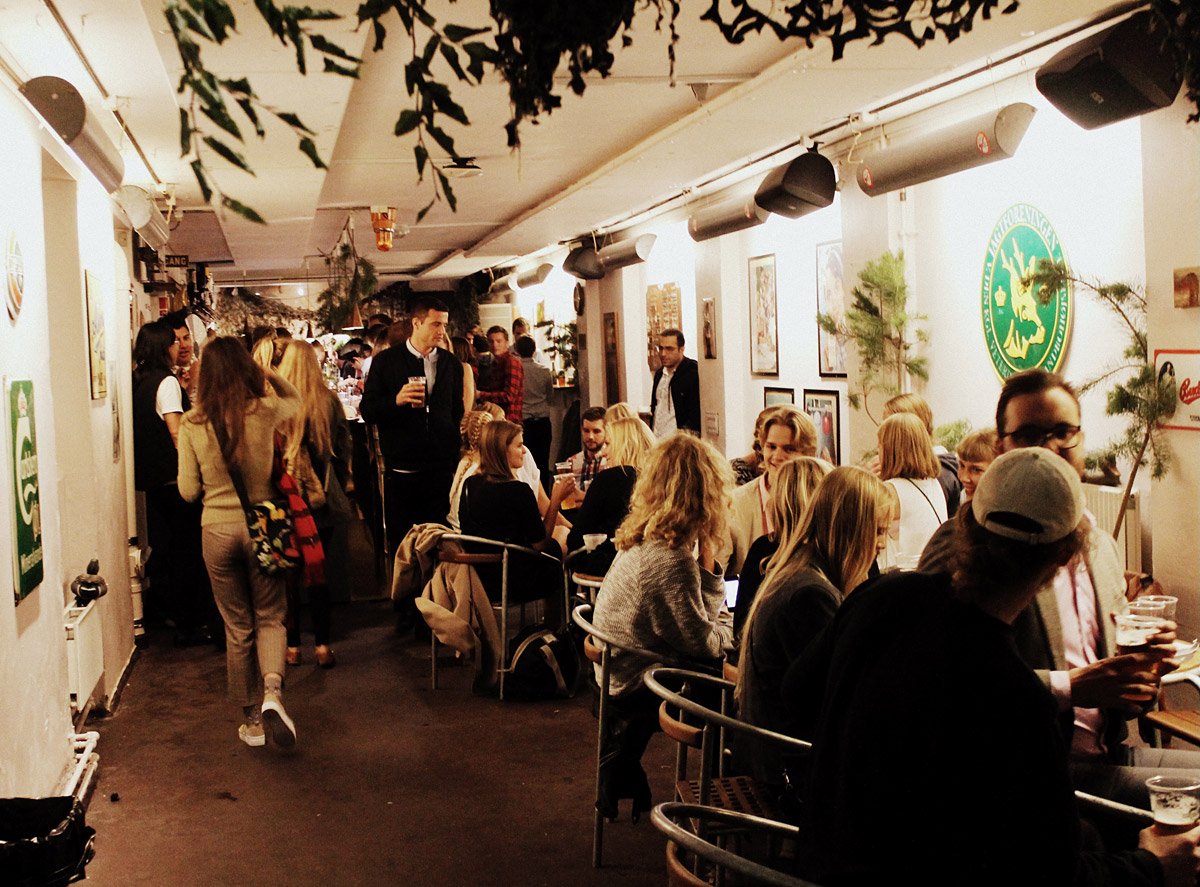 An expedition led by University Post student reporter Jack Robinson set out to conquer 12 UCPH Friday-Bars in one night. Would the challenge prove too monumental?

Why do people climb mountains? The pursuit of knowledge, the thrill of adventure, or simply because they are there?

Many asked us the same questions when we said we wanted to visit all of Copenhagen’s ‘Friday-Bars’ in one night. Where can the cheapest beer be found? Where is the bar with the hipster of my dreams and where is the place to dance to Abba like no one is watching? All these and more were the burning questions we sought to answer. But with twelve potential stops, four campuses and a time limit, it wasn’t going to be easy. This was our Everest.

A spreadsheet was made, routes planned and timings set according to military precision. First, a brief warm up at the North Campus, then on to the southern Amager campus, followed by a quick detour to Frederiksberg, back in to the city centre then up north for the last few.

The evening got off to a flying start when we arrived at 6pm at mBar, only to find there was nothing on this week… On to the South Campus, or KUA (Københavns Universitet Amager). For a newcomer to the site, finding Café Helga (History, Ethnology, Latin, Greek, Archaeology departments) in a room on the 3rd floor of building 12 was a success in itself.

The barman was so excited about the fluorescent punch he had concocted he almost forgot to charge me for it.

We walked in at 19:00 and were greeted by a wall of sound that was ‘IF YOU LIKE PINA COLADAS…’ sung by both bar staff and patrons. A good sign if ever I’ve seen one. The barman was so excited about the fluorescent punch he had concocted he almost forgot to charge me for it.

Outside of the chaotic, French revolution themed bar room, there was a very pleasant roof terrace with stunning views over the architecturally splendid campus. As the sun set and tunes blared, we were excited for the journey.

Cheapest beer: 10 kr bottle
Overall: 4 ½ out of 5 stars (great atmosphere despite early hour, if you can find it)

Next up was Olympen, the intuitively named bar of the Media, Cognition and Communication departments… En route we met some media students who informed us that due to a rogue ‘Saturday-Bar’ event, there was nothing on today. Disappointment all round. BARstionen was similarly out of action. Our mighty list was starting to look somewhat reduced.

Finally another KUA Friday-Bar pulled through. Roland Bar (named after French philosopher Roland Barthes: full marks for witty yet pretentious bar name) was throbbing with sparkly theatre students, hipster art historians and one chap called Kristoffer who stood in the middle of the room, smartly dressed with neckerchief and all, reading Nexø. It was unclear if this was a pick up strategy or if he’d confused Friday-Bar for Friday-library, but hats off to him anyway.

Cheapest beer: 10 kr bottle
Overall: 4 out of 5 stars (the previous 2 disappointments may have heightened this but it was busy, easily found and had a fun atmosphere)

Kaféen was the last of KUA’s Friday-Bars: It is the language departments’ bar, but felt more like a tired living room with too many flags and a bar plonked at the end. Crappy music and move to no lights with a disco ball at 20:30 put a bit of a dampener on the mood that we were in after Helga and Roland.

That was the end of our time at KUA. Having never visited the modern, humanities campus I was impressed with the architecture and friendly vibes. Less impressed with how difficult it was to find some of the Friday Bars! Now for the traverse to Frederiksberg and a quick energy boosting shawarma.

Acaciavej, or A-vej, Friday-Bar home to many science departments in Frederiksberg, felt much more like a regular bar. With an enclosed outdoor courtyard area and a spacious multi-level interior, this bar would be great all year round for sinking a few 15kr (500ml) beers. A more varied crowd attended the bar, ran this time by the forestry department. Happy hour from 6-7 with half price beer seems like a pretty good deal too.

Four bars down and heads were beginning to droop. Fatigue was setting in and we still had five potential bars to go! Tenzing and Hillary were not even reaching for the oxygen at this point. Teo-bar was the first of the city-centre campus Friday-Bars for us. Practically next door to Studenterhuset, it seemed that this would not be the obvious choice for students looking for a cheap beer with a fun crowd. Unfortunately we were unable to test this hypothesis, simply because we couldn’t find the bar. No faithful beer trolley clues, no pumping music to guide the way, and no sign what-so-ever of water to wine antics. Perhaps we would have more luck at Geobar, the next on our list.

By this time we had become expert Friday-Bar detectives. A gathering of loud students outside a university building? A sure clue. A trail of empty beer bottles led us up the staircase, past the rather inviting pendulum inside the Geocentre and in to the humid, sticky GeoBar. As has previously been noted, the bar staff seem to take the approach of ‘one drink for you, one drink for me’. As a result the inebriated geographer attempting to serve me couldn’t remember what I wanted nor how much she was supposed to charge me, so we ended up with five jaeger bombs, two lukewarm beers and a promise not to tell anyone how much we paid…

Before reaching Geobar, the expedition photographer had succumbed to Friday-Bar fatigue and was replaced by some drunkard and his mobile

Compared to the fashionistas of the KUA Friday-Bars, GeoBar is a place where comfort and flexibility for shape-throwing rules. Practical shoes, baggy t-shirts and disregard for conventional dancing dominated the home made dance floor space in the corner. The DJ system consisted of youtube on a laptop and whoever had a good idea for a song. Despite Vanessa Carlton’s ‘1000 miles’ being on only ten minutes earlier, the roar of appreciation and hug I received from a random Dane was testament to the levels of enthusiasm here.

As the disco ball moon set over the tyrannosaurus wall skeleton and Enrique Iglesias’ ‘Hero’ came on through the speakers, the realisation set in. We would never make the summit.

However in stark comparison to the bouncing dance floor, the sofas and chairs surrounding were occupied by those who had been at it too long or didn’t have the stamina to continue. A member of our party was slowly sinking in to their beer, murmurs of a second kebab could be heard and complaints of tired legs overcame the desire to add more Friday bars to the list. As the disco ball moon set over the tyrannosaurus wall skeleton and Enrique Iglesias’ ‘Hero’ came on through the speakers, the realisation set in. We would never make the summit.

Cheapest beer: depends on the bartender but probably pretty cheap.
Overall: 4 out of 5 stars – no one cares what you look like, as long as you don’t mind dancing to Busted.

Concluding notes from the expedition: What we learned

Despite reaching a meagre nine out of twelve (and only actually experiencing five) Friday-Bars, this noble quest was no failure. Much like Tenzing’s failed first Everest attempt a year before his historic success, much has been learned. Here are the important points for any newcomer to the Friday-Bar scene, or even a veteran who has chosen never to ask the important questions:

– A ‘Friday-Bar’ is essentially a room in a departmental building, run by student volunteers from one or more departments with the aim of selling students booze as cheaply as possible, once a week.

– The name may have little or nothing to do with which department it is in.

– All students are welcome to every Friday-Bar, in theory. Some did require card access and others were very well hidden away. So in practice, people do seem to stick to their own Friday-Bar, or may only venture further afield if they know someone at another Friday bar.

– The assumption that Friday-Bars are open on Fridays is confusingly not always true. Special Saturday events may prevent a Friday-Bar from opening, and some only open once every two weeks or even once a month. This again leads to students generally sticking to their own bar.

– Beer is cheap. Very cheap. You can expect a bottle for 10 kr, or 400/500ml for slightly more. Other drinks are available and are also pretty cheap.

– This comprehensive guide compiled over weeks does a much better job of summarising all Friday-Bars.

– If you want to experience multiple Friday-Bars in one evening, stick to one campus. At the south campus (KUA) it is particularly easy to crawl from one to another.

– If you do decide to venture out of your comfort zone and try another department’s bar, find a friend who knows where it is, and if it’s even running.

– Café Helga and A-vej stood out as favourites from this expedition, but tastes are of course subjective. The only way to find your favourite is to book in to base camp and make your own summit attempt.

About the author: Jack Robinson studies Climate Change. He escaped the UK just before the drawbridge was pulled up. As well as saving the world one tree at a time, he enjoys sport and Vesterbro’s cute cafes.