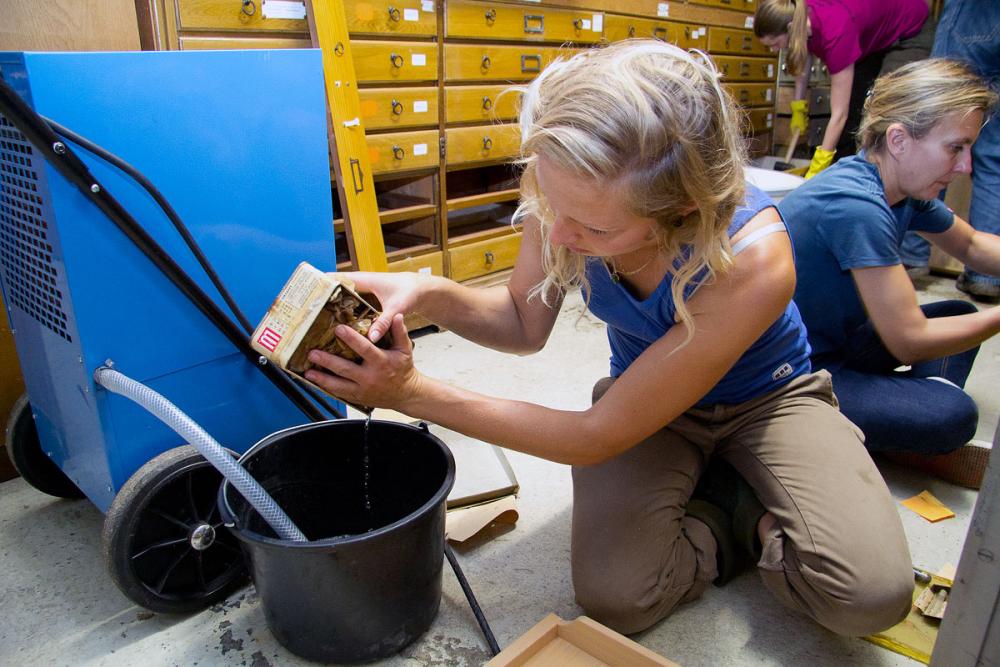 Members of staff at the Geological Museum emptying water out of the mineral and fossil collections
image: Jens Astrup

The catastrophic rain floods of 2 July swamped the Geology Museum and destroyed collections. But brown packing tape and some dumb luck may have saved valuables from watery destruction

As campus service personnel take a deep breath after a month of clearing up and assessing the aftermath of the freak storm 2 July, tales are coming forward that involve tragic destruction of valuables, drama, a bit of good fortune, and the kind of brown packing tape you can buy in the supermarket.

The cloudburst dumped two months of rain on the inner city, overtaxing sewers, drains and cellars in two hours of watery mayhem. According to the University of Copenhagen’s landlord UBST, damage estimates to university buildings are in the region of DKK 50 million.

Worse than this: Estimates of damage to non-insured movable property inside are likely to be even higher.

Water got in everywhere

One of the dramas was at the Geological Museum, which has lost an estimated 10,000 minerals and fossils from its collections.

The water gushed out of all sewer pipes in the building, through leaking cellar walls, up drains and toilets, down entrances, through roofs and even smashing windows, explains Bertel Johansen of the University of Copenhagen’s Campus Service who in a featured comment on our Danish sister site uses the word ‘tsunami.’

»It was terrible. Water from the sewers flushed into all the cellars and from there down into the lower lying under-cellars. And this was just the beginning,« he says.

See a photo story from the Geological Museum aftermath here.

100 people wouldn’t have been enough

»Water stopped the main electricity switchboard and there was suddenly no power. Then the roof, which at the Geological Museum is 118 years old, started leaking,« Bertel Johansen adds.

Staff attempted to save what could be saved in the immediate aftermath of the rain storm. But they were helpless against the forces of nature, Bertel Johansen recalls:

»Even if we had been 100 people on the spot, we couldn’t have done anything«.

In the midst of disaster for the Geological Museum, a hero emerged, says Bertel Johansen, referring to Sten Lennart Jakobsen, a conservation officer who inadvertently saved valuable minerals and fossils in the so-called Danekræ collection.

The University Post tracked him down to ask him how he did it. Workmen had been working inside the building for weeks before the flood, he explains.

»To avoid dust, I had put brown packing tape around the doors. After the workmen left I had forgotten to get rid of the tape. As it turns out it helped keep the water out«.

Bertel Johansen jokes that among personnel the name for the packing tape is now »the Sten Lennart«.

But Sten Lennart Jakobsen himself will only admit to his own luck, not his ingenuity.

»The whole cellar was under seven centimetres of water, so in this case it would not be colossal amounts of water I had kept out, but yes the Danekræ collection was saved, and yes we were lucky«.

10,000 fossils and minerals lost for good

The Geological Museum houses drilling cores and samples, some of them identified by small yellow notes. Notes have been destroyed to the extent that some samples no longer can be identified.

His estimate is that 500 drawers, each containing 20-30 fossils and minerals, maybe over 10,000 pieces, have had to be discarded from the Geological Museum in recent weeks.