And now: The cheese robot 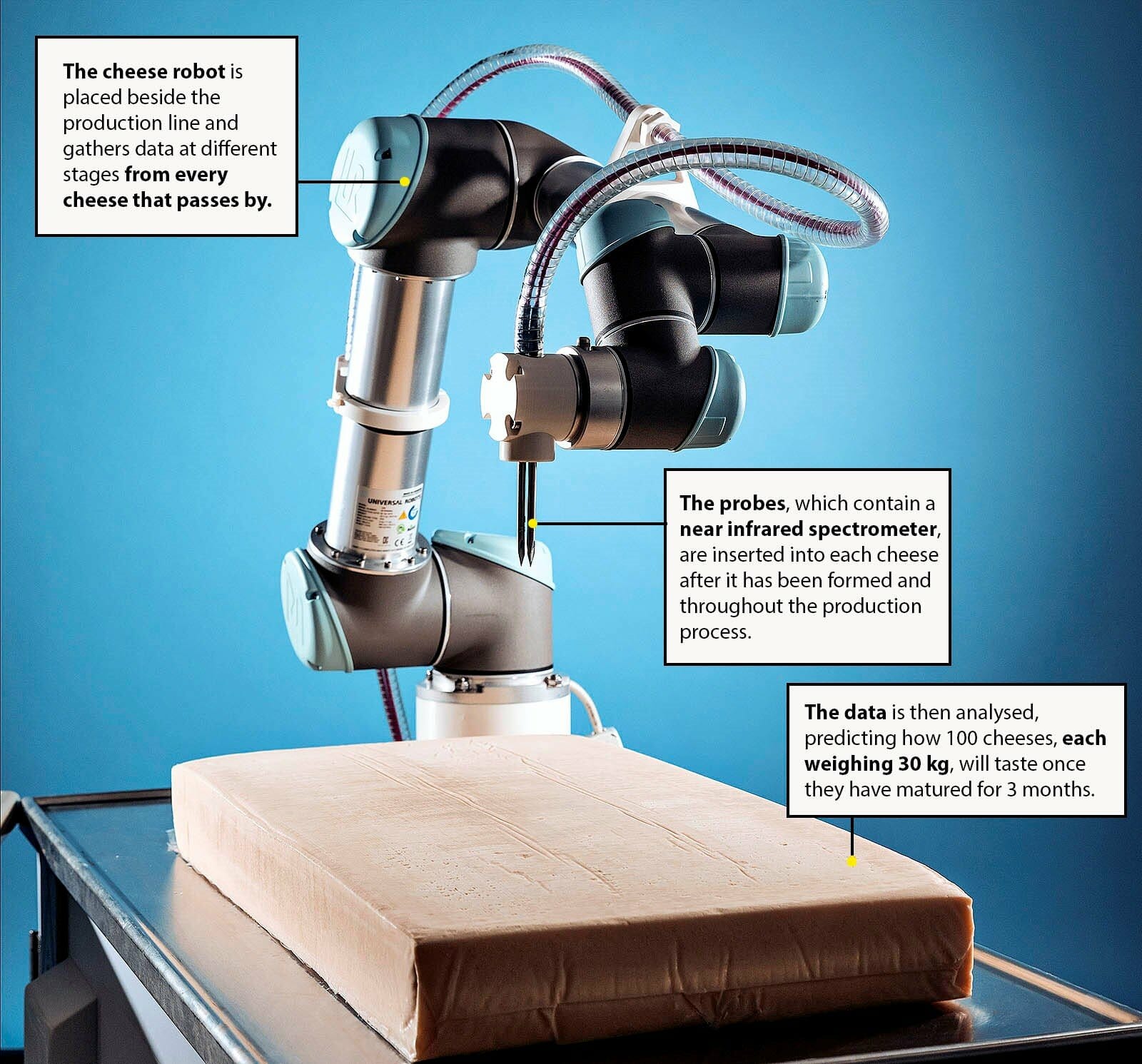 This robot can gather an unprecedented amount of information from cheese. With the help of mathematical formulas, it can accurately predict the finished cheese’s flavour and texture, something that has eluded cheesemakers for generations.

How will a newly formed cheese develop and how will it taste when it is mature?

Cheesemaking has traditionally been a somewhat unpredictable process. Cheese is made up of such a complex mix of amino acids, fats, lactose, salts and flavourings that cheesemakers have to rely on their experience for every new batch.

Years of hands-on experience can give cheesemakers great results, but modern producers want to know as much as possible in advance so that they can create a consistent product.

A formula to predict flavour

Klavs Martin Sørensen, associate professor in Food Science at the University of Copenhagen, is working on a way to eliminate the element of uncertainty in cheese production.

He has constructed a so-called cheese robot, which gathers a large amount of data from every single block of cheese throughout the entire production process and uses the data to predict the flavour and texture of the finished cheese.

What is truly unique about your cheese robot?

Klavs Martin Sørensen trained as an electronics technician and has specialised in automation, online analysis and measurements. He was working as development manager in the meat industry in 2009 when he started collaborating with UCPH. This led to him completing his PhD in 2015 and being employed as an associate professor at the Department of Food Science (FOOD) in 2018.

»It can gather so much data by taking numerous samples from every cheese that we are able to create a mathematical model, which describes exactly what each cheese consists of. It can tell us about the development of each individual cheese and how it will taste when it reaches the supermarket shelf,« says Klavs Martin Sørensen.

Cheese producers usually only test the first and last cheese in every batch (and each cheese can be divided into around 50 pieces before being sold), whereas the cheese robot carries out several measurements on every cheese produced. This means a lot of extra analytical work for the producer, and some of the world’s best mathematicians were – and are – required to decode the data.

»In our research group at the Department of Food Science, Chemometrics and Analytical Technology, we use mathematical models to analyse the colossal amount of data we get from the cheese robot,« says Klavs Martin Sørensen. He continues:

»In the research group, we are global leaders in our field, which is multivariate data analysis, also known as chemometrics, and that has helped to define and develop the tools we use.«

Klavs Martin Sørensen explains that the project was made possible by the highly specialised knowledge at the Department of Food Science, UCPH, and by his own practical experience of developing new equipment for the food industry.

In theory, other research groups at universities worldwide could have been the first to develop a cheese robot, but the project requires collaboration between a lot of different disciplines.  Due to such interdisciplinary efforts, UCPH ended up being the place where the robot was created for the first time, Klavs Martin Sørensen explains.

The instrument is a near infrared spectrometer, which was invented in the 1930s. It emits a range of light in the red spectrum, which has such a long wavelength that it is invisible to the human eye.

The near infrared light is emitted by one arm of the cheese robot, and when it hits the different molecules and substances in the cheese, the molecules absorb a specific wavelength of light, so it is not reflected back.

The robot’s other arm registers which wavelengths of light fail to return and with the help of advanced mathematics, it is possible to determine the chemical composition of the cheese. 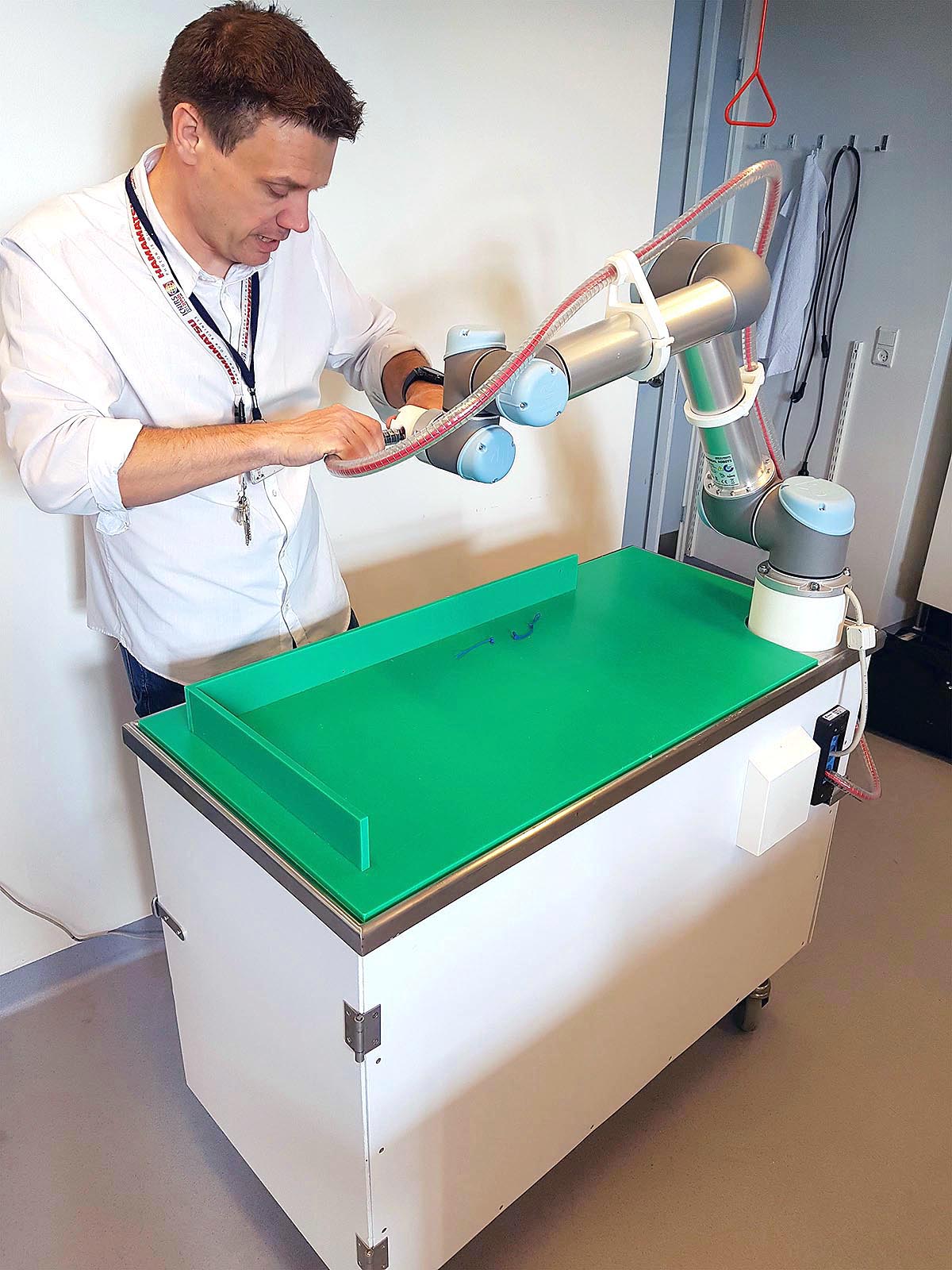 Klavs Martin Sørensen with the ’cheese robot’, which is mounted on a trolley so it is easy to move around the production floor in a factory.
image: Anders Fjeldberg
Newsletter