Angered by Danish research cuts - rode his bike from London 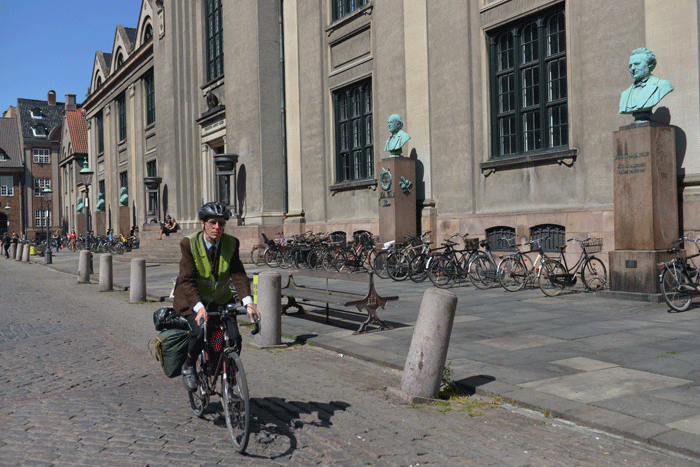 Alex McDowell may not be Danish, but he is cycling thousands of kilometres to protest the Danish government’s cuts to education.

The 47-year old physicist from London started his journey on Saturday 28 May as a result of being deeply concerned about cuts to research funding in Denmark. He has decided to use a novel approach to protest the cuts by cycling across several European countries and delivering letters of protest to Danish politicians.

“I have cycled all the way from London to Harwich, got a ferry to the Hook of Holland, and cycled to Copenhagen using a train to cross the Great Belt to deliver these letters to the Danish political parties, and explain that these cuts in research and education cannot proceed and must be reversed. The rot must stop!”, he says to the University Post. The newsroom was his first stop in central Copenhagen.

Cannot leave it up to industry to fund research

According to Alex, the government cannot afford not to fund research and education properly. He points out that in the past it was only the wealthy who could afford to get an education and that it was often only those with financial backing that were able to do scientific research.

It cannot be left up to industry alone to fund research, he argues, because the only research that industry is likely to pursue will be those that can reap quick or immediate benefit. “Would industry have funded Isaac Newton’s work?” he asks rhetorically before adding “And yet his laws of motion put us on the moon!”

Alex McDowell had to explain many times during his 10-day bike ride what the purpose of his protest was. This sign said it all

Alex McDowell is a part of the science charity Institute of Physics, though the charity isn’t a part of his protest. The method chosen was not without reason: “I think politicians are probably tired of receiving emails or phone calls, so I thought this might get their attention”.

When asked why he cares about cuts to Danish research and education despite not being Danish himself, he responds: “For years, in Britain, education and science have been underfunded, but this does not mean we should tolerate the rot when it spreads to other countries!”

His long journey, covering thousands of kilometres, hasn’t been easy and it’s taken a physical toll on Alex: “My legs are aching,” he says. That was not the hardest part of the whole ordeal, however: “The hardest part was convincing my partner to let me do this,” he laughs.

See the gallery below of Alex McDowell delivering his letters of protest to parliament.