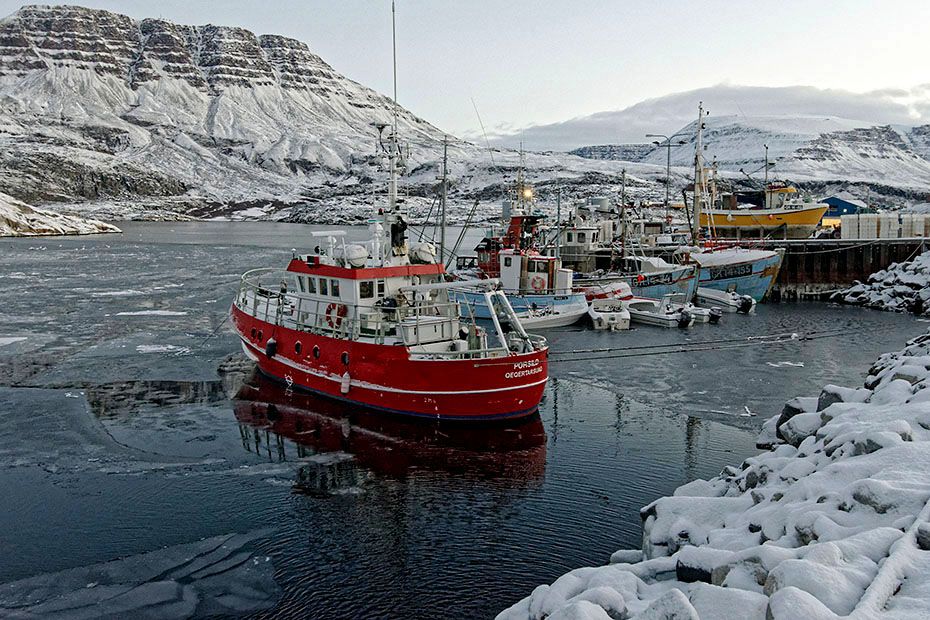 Research ship Porsild ready, early one morning in October 2016 to go on its mission for the day. It has its base in Qeqertarsuaq harbour, only a few km from the Arctic Station
image: Anders Fjeldberg

ADVENT CALENDAR 2016 – The Arctic Station’s own research ship is used for all kinds of tasks, such as collecting sea water samples or sailing around Disko Island. Enjoy the photos and coverage from Greenland leading up to Christmas Eve

‘Porsild’ is the name of Arctic Station’s own research ship. It is a steel vessel with space for the captain, three crew members and a maximum of 12 researchers, with space for eight to sleep overnight.

Because Arctic Station has had Porsild for many years, polar researchers have been able to regularly collect data from the same place over a long period. It is unique to have that option accessible in the Arctic.

On a Monday morning in October, with the sun still about to rise over the sea in Qeqertarsuaq on Disko Island, sailors and Arctic Station leader Casper T. Christiansen board Porsild with measuring equipment for a mission.

The measuring equipment includes probes, which the crew lower down to 300 metres deep in the sea several nautical miles off the harbour. The probes allow the crew to take water samples and measure saline content and temperature within the different layers.

In this way, the researchers collect data which indicates changes in climate over several decades.

Not for ice sticks

Nothing comes without hard work, and it is certainly hard work to collect data, as the University Post reporter learned on a trip aboard the Porsild.

Sailors and employees have to take samples from many different sea-depths from three different positions. The probes are heavy, the deck is slippery, the ship rolls in the swell which comes in from Baffin Bay, and it is crucial to work securely and safely with the equipment to avoid accidents.

It is hard to keep your balance when the equipment is lifted up and back over Porsild’s deck several times.

Although the ocean currents keep the sea around Disko Bay ice-free for another month yet, it is still freezing. The air temperature lies below freezing point, and the job of taking samples goes on for the majority of a work day.

Here is a kind of ‘large bag’ or net, which is towed behind the ship to collect samples of the small fauna in sea surrounding Disko.

That is why it is good to have Porsild’s little, heated wheelhouse, which serves as a space to eat lunch or get warmed up, before Porsild returns to Qeqertarsuaq’s protected inner harbour. In December, it freezes over, and Porsild cannot return to its missions until early spring.

Station employee and sailor Erik Wille is working to lift a heavy probe over the ship’s railings as the ship rolls gracefully in the sea. The probe has collected sea water down from 300 metres depth.