Are grades everything? Students are certainly acting that way 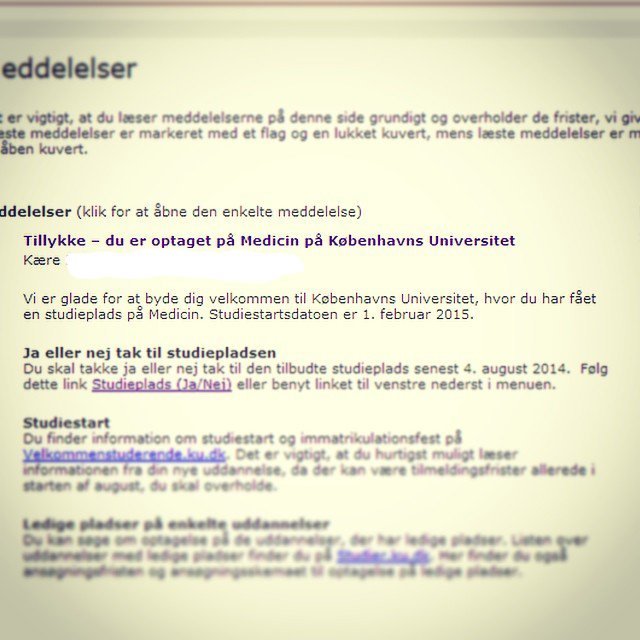 Just admitted to one of the more prestigious programmes of study
image: Rebekka Nielsen

Entry into universities is highly focused on grades. In Denmark, this is now affecting the way students perceive the programmes and their own passions and interests

As university admissions become more competitive, some students say they are applying based on what their grades are, rather than on their personal interests and abilities.

“I can definitely say as much that International Business (IB) was extremely attractive in my eyes precisely because it was so hard to get a seat. I knew that finance was the way I wanted to go, but I never really considered all the other good undergraduate programs at CBS and UCPH,” states Christian Møller, a former International Business student, to the University Post. IB currently requires a grade average, of 12.1, effectively barring entrance to everyone but the perfect.

He elaborates: “Choosing from the highest averages thereby becomes a shortcut through the myriad of educations, which is extremely confusing when one is only 17-18 years old and does not know at all what they would like to do for the rest of their lives.”

“There was a guy on our introduction trip who said that his friends had asked him why he didn’t study medicine when he had such a great grade – instead of mathematics,” recounts Ralph Møller Trane, a Master’s student at the University of Copenhagen. “But he wanted to study it, so he stuck with it.”

Admission into the top education fields not only includes a secure spot in a prestigious program, but bragging rights as well. Some educations are more appreciated than others, defying the logic that a successful education should be based on your interests.

Nick Bruun, another student, admitted in an interview that he pushed himself to the limits to get a 12.7. The student from Esbjerg explained he’d always been a thorough person, but he sacrificed both sleep and class readings to perfect the big assignments and get top grades.

A bad grade can act as a permanent black mark on your record. While some are trying to prevent receiving one, others are trying to minimize the effect of the one they already have.

Anne Sofie Larsson received a 6.7 and spent an extra five years taking more classes, getting work experience and volunteering, only to be rejected from the university when applying through quota 2.

Quotas or not quotas

While the university advertises both quota 1 (where grades are the only factor determining admittance) and quota 2 (where, among other things, interviews, work experience and grades determine admittance), many feel there is still too much emphasis on quota 1.

Another issue is the whole question of grade ‘average’.

A former engineering student Henrik Schwarz reckons that “there is too much focus on average grades. For example, I studied with someone that had failed mathematics. I mean, I don’t exactly understand how someone can be admitted into an engineering degree and fail math, but because he had o.k. grades in his other classes, his average was high enough.”

Politicians disagree over the issue. Research spokesman for the Social Democrats, Jeppe Bruus, believes that the quota 1 system is too narrowly focused

The party wants to get rid of quota 1 completely, using the University of Southern Denmark (Syddansk Universitet) as an example of an alternative method. The university set a goal that at least 25 per cent of students are accepted based on interviews and tests by 2017 with the hope that they can accept all students this way in the future.

Venstre, Denmark’s Liberal Party, is the largest party in opposition and believes that the present quota 1 is a good system.

This is in part because it forces students to keep in mind that they want to enter higher education, preparing themselves better earlier on.

The question now is whether universities across Denmark will promote alternatives. The discussion is bound to continue.