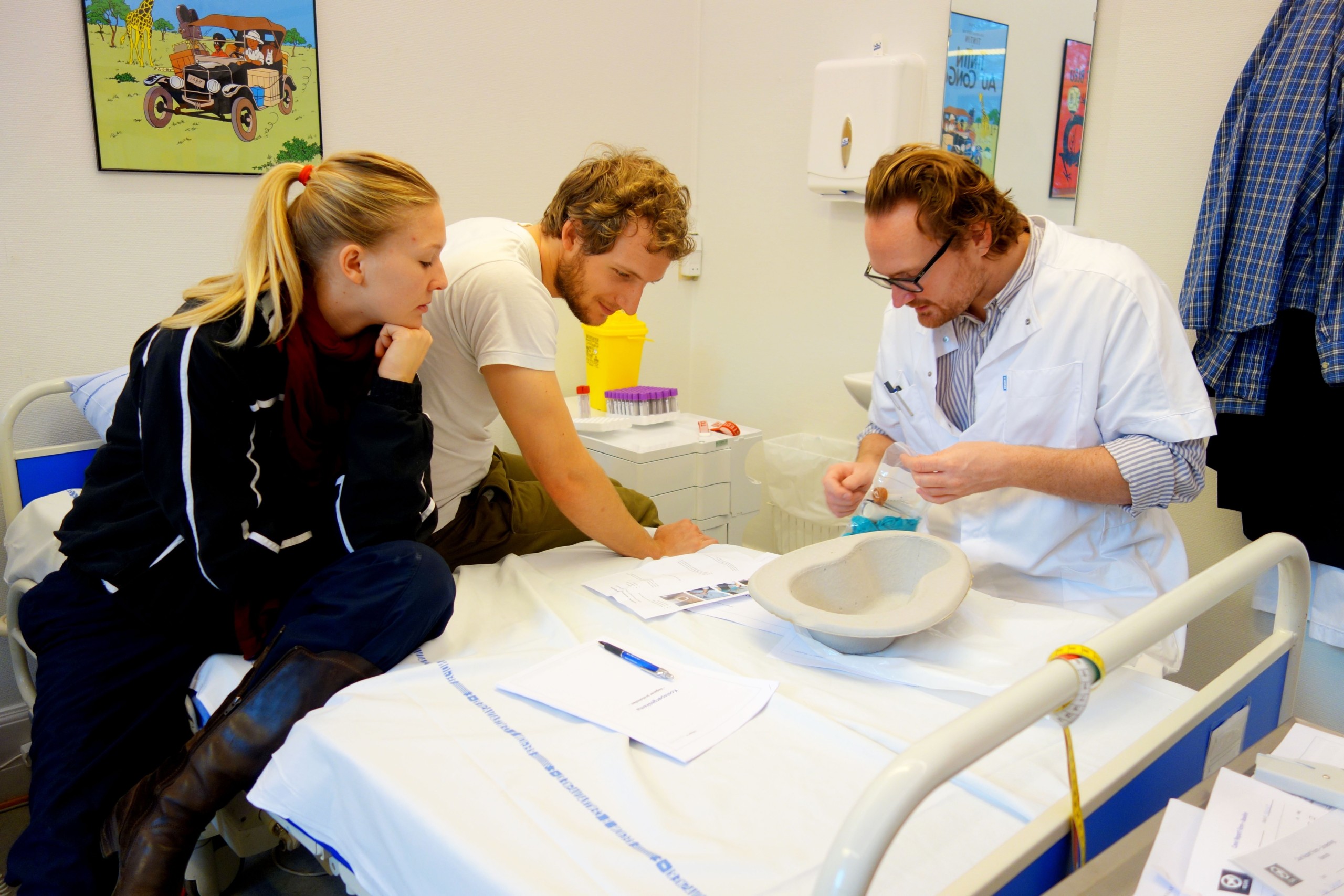 Tue Haldor Hansen (right), is leading the study. Here he is going through the study procedure for taking samples at home with a male vegan participant (centre) and his friend
image: Sofia Popov

Some people believe that cutting meat away from their diets will make them healthier. Research at the University of Copenhagen is taking a good look at people's stomachs to find out

Research at the University of Copenhagen (UCPH) may decipher whether vegans are healthier or more unhealthy than their non-vegan compatriots.

The researchers at the Novo Nordisk Foundation Center for Basic Metabolic Research are examining the effects of a vegan diet on the microorganisms in your gut (your microbiota) and metabolism.

In this way, the effects of a plant-based diet on microbial communities can offer insights into the manifestation of disease, symptoms of which are intricately linked to the gut.

Our bodies have approximately ten times more bacterial cells than human cells. This is hardly surprising considering that bacteria dominated our microbial planet for over three billion years. Nonetheless, the evolutionary influence of microbes on the human body has fuelled interest in decoding the role particular populations have in the maintenance of health.

Veganism, defined as the practice of abstaining from the consumption of all animal products – meat, dairy and eggs – has attracted attention from science communities due to the health attributes associated with vegans that eat a wide array of fresh fruit and vegetables.

Thus, as dietary influences on the microbiota are becoming better documented, Tue Haldor Hansen, leading the study, decided to further investigate the microbial influences of a vegan diet. In essence, he hopes to distinguish the “main compositional differences between vegans and omnivores,” in the gut microbiota.

This study is the first and largest of its kind, applying metagenomics (the study of genetics using environmental samples) to deduce the effects of dietary lifestyles on the microbial communities and metabolism of 75 vegans, matched with 75 omnivore controls.

The subjects must complete four-day weighed dietary regimes, whereby they weigh all food consumed. This, taken with a stool sample, allows the team to methodically obtain various measures that could possibly deduce a lot about the effects of their lifestyle.

Using deep sequencing, the team will be able to examine the functional capacity of the microbiota which, in turn, will allow them to compare various parameters, such as insulin resistance, glucose and lipid levels, and inflammatory markers, on a species level. In contrast to cultivation techniques, which can only cultivate 20 per cent of gut bacteria, sequencing is essentially hypothesis free, presenting a more refined approach and no need for bacterial strains to be identified beforehand.

Eating an abundance of plant foods has long been correlated with health and longevity. Consuming mostly plant foods has been shown to lower insulin growth factor 1 (IGF-1,) the hormone most notably linked with accelerating aging when increased.

Plant-based vegan diets are particularly noted for presenting lower incidences of many Western diseases, such as cardiovascular disease, diabetes and cancer. Hence, analysing the microbiota of vegans versus traditional omnivore diets offers the opportunity to determine whether it is a change in the bacterial gut communities, amongst other factors, such as genetics, that influence disease susceptibility.

Still, what constitutes health? Tue expects that healthy individuals will “have, from a metabolic perspective, more diverse microbiota” which is particularly important since reduced microbial diversities are associated with the prevalence of obesity and Type II diabetes.

The rising popularity of the vegan lifestyle makes it easier to gather vegan participants for investigations into the effects of plant-based diets in controlled human studies.

For Tue’s study, the team hope to have their first set of results by December.

It is yet to be determined, in this chiefly uncharted area of research, what we may discover about the role microbes play when plants power them.