At DARK, a new work routine comes to light 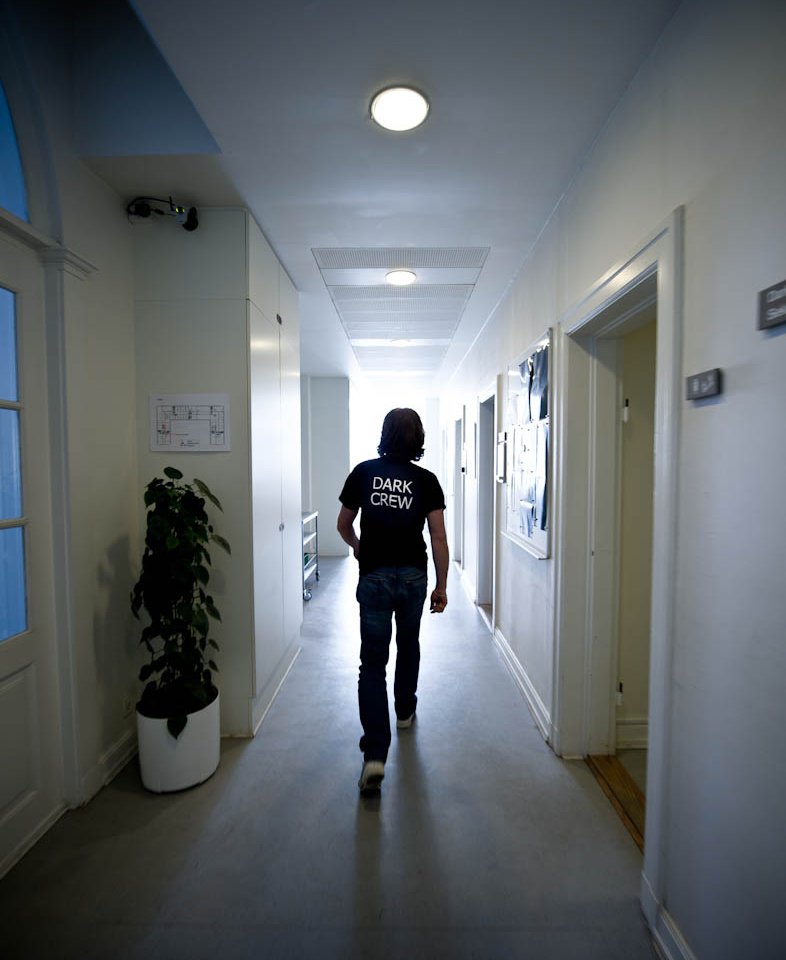 Down the corridor at DARK, one place where the meetings actually work
image: Lars Juul Hauschildt

Reporting from the Dark Cosmology Centre, I got caught up in innovative meeting platform ArXiv

Four out of every five people who stroll the long L-shaped corridor at the Dark Cosmology Centre (DARK) are from outside Denmark. Think about it. And this number includes administrative personnel.

In terms of the University of Copenhagen strategy to internationalise, DARK seems to be over-performing like a strong gravitational field. Indeed the Centre considers itself to be among the top five centres of astrophysics in the world.

It makes you wonder. And so I decided to spend a day there. OK, astrophysics is a highly internationalised subject, but what is the Dark Cosmology Centre doing right?

For one, I found out, an innovative new daily meeting system that seems to combine the rigour of science, the stimulation of good conversation, and the speed and intensity of an election.

The meeting system is based on a pre-print global electronic scientific paper archive called ArXiv. The astro-physics part of it is called astro-ph e-print archive, and it publishes non-peer-reviewed work constantly, updating like a news feed. At the Centre, the meeting system has been dubbed ‘astro-ph’ by extension.

»Every day there are around 30 scientific papers released in the database on average«, explains Peter Laursen, a postdoc at the Centre, who has supported the development of the new meeting system.

»After checking astro-ph at midday, all researchers skim through the papers and vote for the ones that we think are the most interesting. During the afternoon, a moderator then counts the votes and assigns, say, three papers to three different people at the Centre who know something about the field. It is then these people’s task to look into the papers in detail, and present them at the 10.30 meeting the next day«.

The Sun is a star

Sitting in the lounge at DARK, a massive wide-screen TV dominates one side of the room. 30 or so people sit in sofas and chairs, while others stand around the sofa arrangement, peering for a better view. It is someone’s birthday, so there is cake on the table.

A researcher is presenting one of the astro-ph papers on the widescreen with dot graphs and lines.

»The Sun is a star,« interjects associate professor Johan Fynbo at one point, and the crowd erupts into collective laughter.

His remark is about the only thing that I understand during the 45 minute session.

Words like ‘galaxy formation’ and ‘red shift’ give me a faint spark of recognition, but I have floated away from their real meaning like a star disappearing behind an event horizon.

Meeting over, and I give up on the astrophysics side of it. I ask Kelly Denney, an American postdoc for some perspective on the astro-ph-based meeting system itself.

She has had experience with a comparable system of sharing knowledge at Ohio State University. I question her about the alternatives.

»At Ohio State, we didn’t have the voting system. Instead, the moderator is in charge of selecting the new submissions they feel most interesting or important to the field. These are posted on something called the Astro-Coffee ‘Daily Brew’, and people come self-prepared to discuss papers on the list. We also made a point to solicit a science summary from all visitors passing through, a kind of polite harassment if you will!« she laughs.

DARK’s structured, astro-ph-based, voting system is »a great way to informally find out what is going on, and get a larger appreciation of your field,« she adds.

Getting people talking with each other in a specific way is of course the point of any structured meeting system. According to Kelly, the Dark Cosmology Centre system can be conducive to having talk leading to action, in the form of more co-operative papers.

»At Ohio State, we called them coffee papers because you have a group of co-authors from within the same department, where the inspiration for the paper usually came from an ‘Astro-Coffee’ discussion,« she says.

Right now she is doing something like a coffee paper with one of her colleagues Darach Watson from DARK based on her own research, she explains.

So what is the paper about? I ask, intrigued.

»It is a secret! We don’t want anyone reading it and publishing before us,« she smiles, glancing at the astro-ph on her screen.

»Let us just say that it is a simple but new way of looking at my data«.

I want to find out how much time is spent every day on the Dark Cosmology Centre meeting system, and who is doing it.

Down the corridor, past the rows of offices, each containing three researchers, I find Anna Gallazzi, an Italian postdoc who has studied and worked in Heidelberg and Munich. She was one of the three who presented at today’s meeting. In terms of astro-ph, Anna admits that she is a busy bee:

»This particular version of the system with the voting was introduced in January,« Anna says. »And I have done one paper presentation every week since January«.

»Yeah, I rarely say no! Maybe it is time I should start concentrating on my own work,« she laughs.

»The paper I presented today was a paper that I voted for myself yesterday,« she explains. »The moderator subsequently assigned it to me. I estimate that it took me about an hour to prepare. Remember, we don’t have to prepare slides, as we just present what is in the system. Maybe you could find a more efficient way to do this, but the numbers of papers coming in every day are large,« she says.

»The basic idea is to simply present to the others why the paper is interesting. In terms of both methods and results«.

A great fan of the research environment at Dark Cosmology Centre, Anna compares it favourably to her former workplace at the Max Planck Institute in Munich and Heidelberg.

»It was more hierarchical there, with the director deciding most things. Here I see involvement with everybody at the student and postdoc level. For example, I review postdoc and PhD applications, stuff that I didn’t do at Max Planck, where the only task I had besides my research was to organise a colloquium.«

Some vote, some don’t

Back down the corridor, I ask Daniele Malesani, another postdoc from Italy and today’s moderator, why Anna has been selected ten times to present in as many weeks. Checking the lists, there are 5 Italians among the whole group of 48 researchers, students and staff. Is this the mafia at work?

»This is the first week I have been selected as moderator,« he laughs, explaining that he himself could not have co-ordinated this even if he had wanted to.

The system used to be entirely based on the moderator selecting the papers he thought were interesting. But the voting makes things less rigid and gets people more involved, Daniele explains.

He spends 30 minutes a day checking vote tallies, and selecting papers and presenters for the next day’s meeting.

Normally he will assign a presentation to someone who has specifically voted for this paper. Sometimes, he admits, he assigns to people who haven’t voted at all: This to introduce variation.

»I have been many places but this is the only place where the meeting system actually works!« he says.

Follow a photo story from the meetings at the Dark Cosmology Centre here.