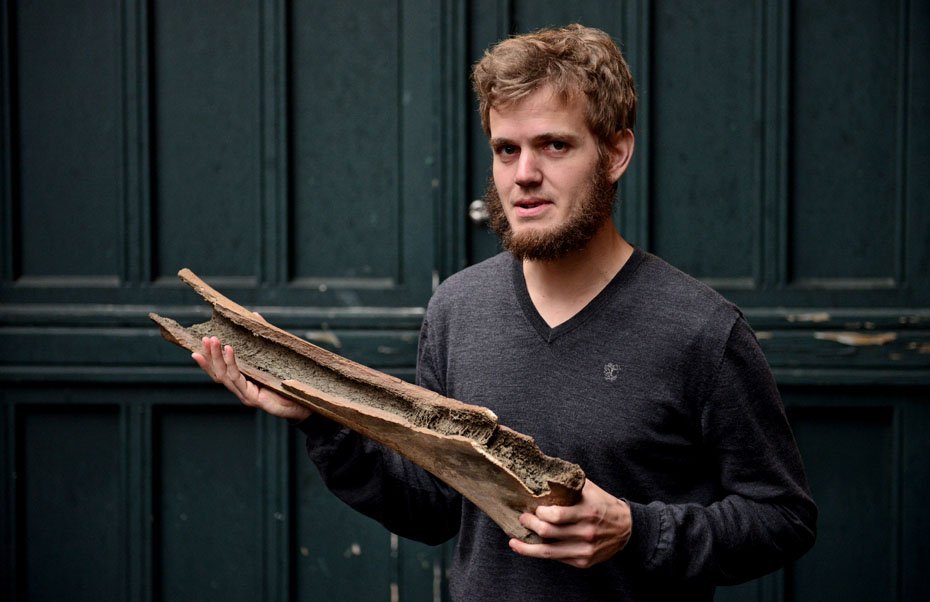 Søren Overballe-Petersen at the Centre for Geogenetics at the Natural History Museum, armed with a mammoth bone. He has extracted 43,000 year old DNA fragments and discovered that living bacteria can revive ancient DNA.
image: Anders Fjeldberg

Ancient DNA fragments from a 43,000 year old mammoth bone can become active again. This challenges the current understanding of what bacteria are, and has implications for the development of antibiotics

University of Copenhagen post doc Søren Overballe-Petersen, has taken the world of geogenetics by storm.

With his PhD he has discovered that even ultra-short DNA fragments from a 43,000 year old mammoth bone can be incorporated by living bacteria. Until now, it was thought that the short fragments were biologically inactive and therefore essentially irrelevant.

The breakthrough has meant Søren Overballe-Petersen’s findings have been published in an article in the renowned scientific publication Proceedings of the International Academy of Sciences USA (PNAS).

Bringing DNA back to life

Søren Overballe-Petersen completed his Master’s in Biochemistry in 2008 and subsequently started his PhD at the Centre for GeoGenetics, both at the University of Copenhagen.

Here, he discovered that living bacteria can consume very short fragments of DNA from dead bacteria, plants and animals. But instead of digesting the fragments, living bacteria incorporated the DNA into their replication process.

In this way, ancient DNA becomes a part of the DNA of living cells.

This has implications for the future development of antiobiotics. When short DNA fragments from dead and resistant bacteria can be incorporated in living bacteria, thus passing on resistant genes, it can make it harder and possibly impossible to treat infections with antibiotics. Among other things, this means that sanitation in hospitals will have to be of a higher standard than it is today.

“We have to change our understanding of bacteria, because if we don’t understand them, we will never be able to control them to the extent we hope to,” he says.