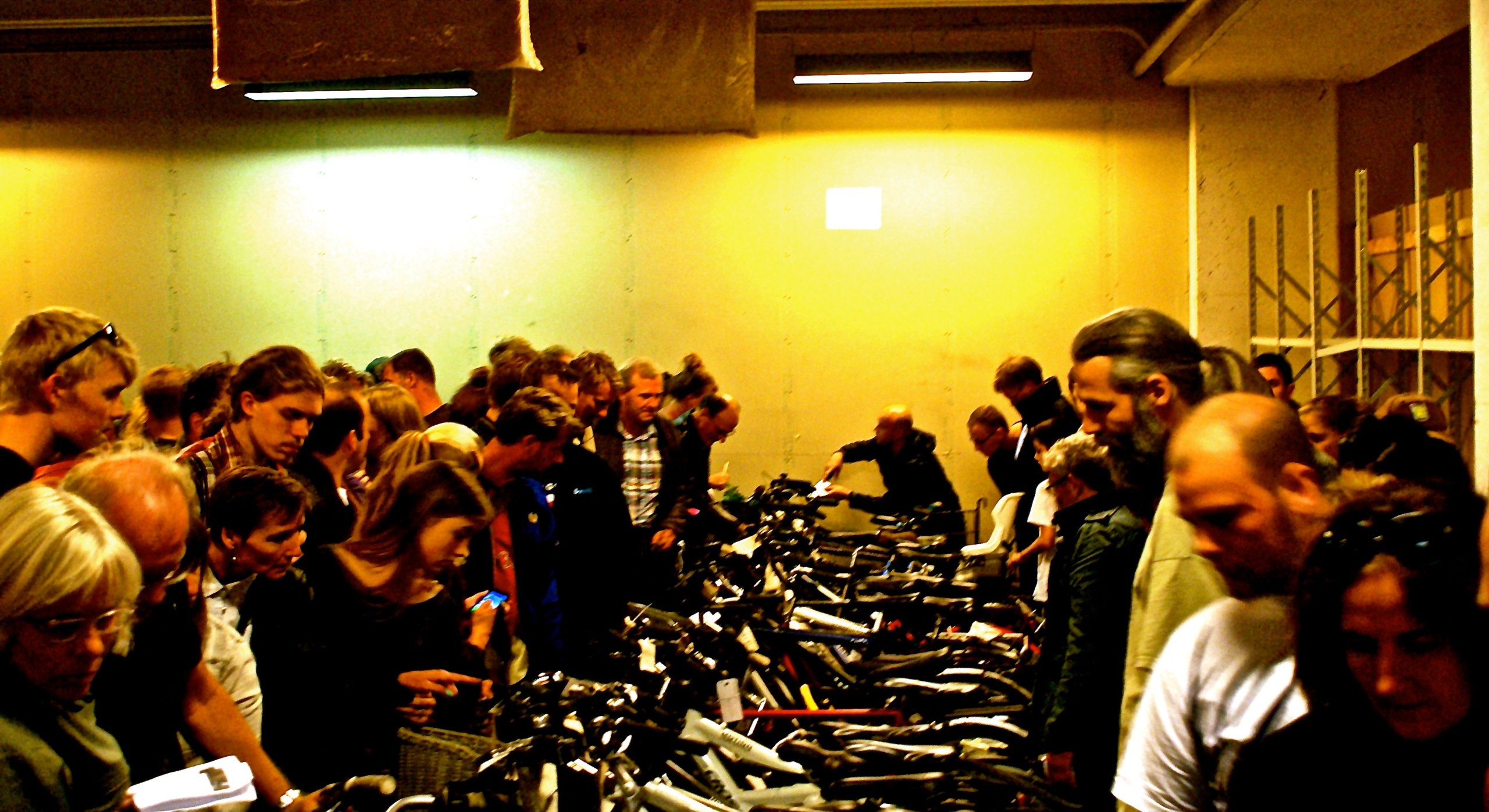 Eyeing the merchandise before the bidding starts
image: Ugo Giganti

Lost bikes are collected by the Copenhagen police to clean up the streets. They are sold every month to the public in an auction

Copenhagen has more bikes than it has inhabitants, and anyone can find a shop with new bikes around every corner. But students’ purses are usually too tight to handle the expense of a new set of wheels. Luckily there is an alternative, and the University Post went down to check it out.

At the end of a dark and creepy corridor a surprising scene is taking place. Three bunches of bicycles of all kind – with numbers attached – in a barely lighted room. People are crowded around this inextricable mess.

“I am helping a friend of mine, as I know a little about bicycles, to find a good race bike for a fair price,” says Holger Pedersen. But even with a sharp eye it is difficult to find what he calls a “decent one”, and after 30 minutes he could only pick out a couple of bikes that he was interested in.

Shot in the dark

The bicycles are sold in the exact condition which they are found in. The auctioneer stresses this point with the greatest authority: He and the police are free of any responsibility in case of defects or deficiencies. The defaults stretch from a flat wheel, to a missing seat or even a broken chain.

The minimum bid is set at 25 kroner, which is raised by each bidder by a minimum of 100 kroner, with the actual purchase price the hammer price plus 24 per cent. The sales go quickly. But when the first bicycle selected by Holger are announced, the bets rise way too high over his expectations and he leaves the room disappointed.

Those who came to get a bike for a few kroners are mostly disillusioned: “Well I guess that you can find one for some bucks but you would have to walk it home and pay a high price to restore it,” states Andreas Jørgensen, another student who is used to these kind of events.

Hidden in the haystack

The auction, say some, is for purchasers who are ready to invest at least as much money as in a new bike in a shop, but who want higher standard – although used components.

Andreas, with the confidence of an expert, is proud of his new acquisition and people are gathering around it with great interest:

“I will have to change the pedals but that was a very good price for a competition bicycle,” he says. He had to pay a big amount of money, but probably a fifth of the price of it as new. Moreover, he is part of the happy few rolling home, rather than walking back to the train station.