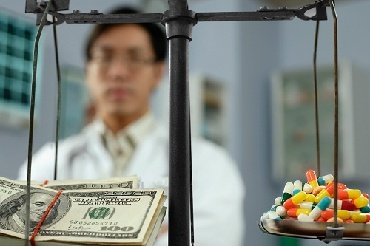 Novo Nordisk is no stranger to ethical dilemmas. Critics say the launch of their new online ethics tool is ironic, given their decision to withdraw medicine from Greece
image: Screen shot

A University of Copenhagen / Novo Nordisk ethics guide faces criticism from sharp tongued bloggers. Novo has a cheek to be talking about ethics, they say

When a multinational pharmaceutical company like Novo Nordisk launches an online tool for ethical decision making, it is likely that eyebrows will be raised.

And indeed, following the recent release of Novo Nordisk Ethics E-learning tool, in co-operation with the University of Copenhagen, bloggers have been quick to point out that Novo has ethical skeletons lurking in its own cupboards.

Ed Silverman, who is behind the pharmaceutical industry observer blog Pharmalot.com writes that news of the ethics tool should be »filed under irony«.

He wonders whether Novo Nordisk CEO Lars Sorensen has taken his own tests, since the company last month decided to pull its diabetes product from Greece after the government instituted price cuts on medicines in the wake of its recent financial crisis.

In light of the company’s involvement in the new ethics promotion tool, Silverman poses the question of just how ethical it is to withdraw a life-saving product used by thousands of people because their government is in financial difficulty.

Some of Novo Nordisk’s own ethical ‘skeletons’ seem to resemble the hypothetical ethical questions raised in the test rather a lot.

Survivors on an overloaded raft

At least if you ask Jim Edwards, a blogger on the management site Bnet.com

He, like Silverman, writes that Novo has a cheek to be talking about ethics since it is the only company that has threatened to withdraw its drugs from Greece.

Edwards then ponders whether the question on the ethics site about whether it is ethical to pull survivors of a sinking ship into an overloaded lifeboat is a mere coincidence.

In the online tool, there is also question about companies winning business by giving incentives rather than competing on quality and price.

»This is an unhealthy business environment…« according to the tool.

However, Edwards points out that Novo has been accused of something similar in a U.S. lawsuit against Omnicare, a pharmacy that sells drugs for the elderly.

The lawsuit claims that Novo gave cash to Omnicare in order to guarantee market share for its drugs, and that it paid USD 35,000 to Omnicare in a fake grant to educate the company’s pharmacists little-used drugs for old people.

Read about the launch of the ethics tool here.