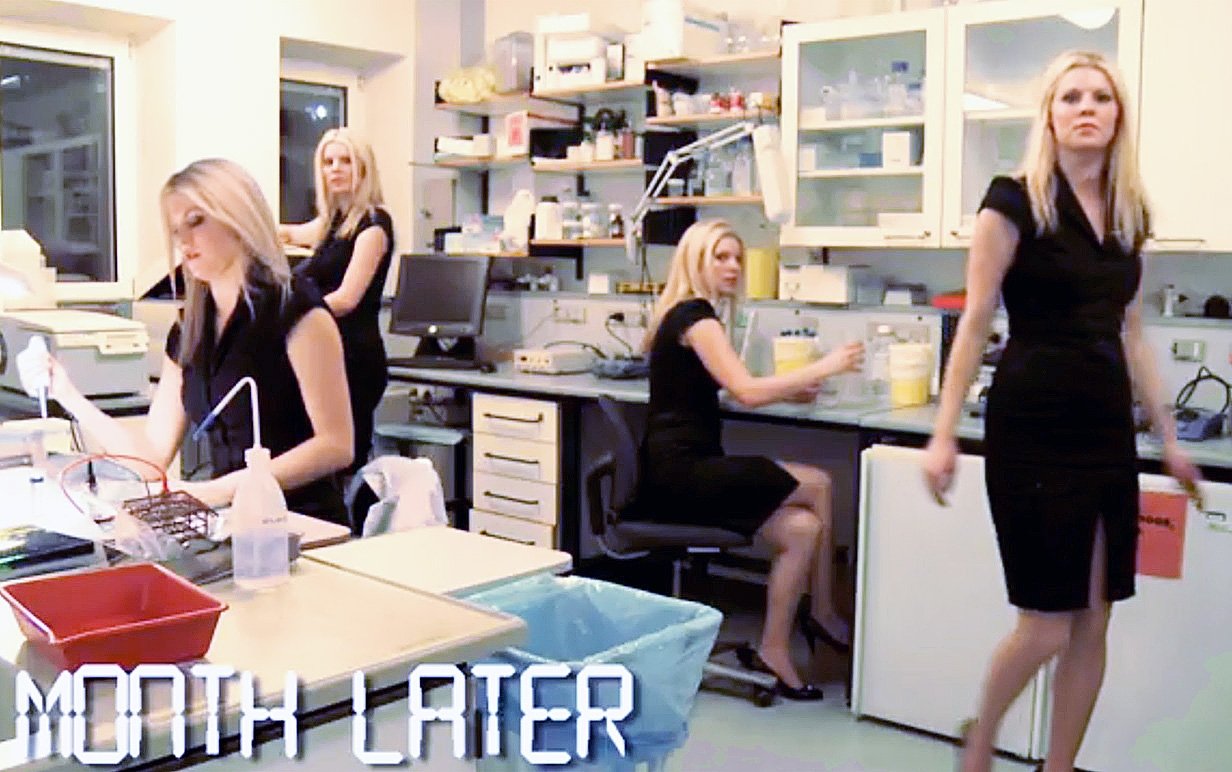 A still image from the million-click film
image: Youtube.com

The million-click film of a pretty blonde did not stereotype women, says Faculty, as it starts new contest. But gender researcher finds the video ‘predictable’

A pretty blonde walks into the lab. Some geeky scientists collect a specimen of her hair. Next week, hundreds of cloned pretty blondes show up at the lab.

This is the plot of ‘The Power to Create,’ a video that over 1 million people across the globe have seen on YouTube, and that was created to promote the University of Copenhagen’s Faculty of Natural Sciences.

The Faculty is now trying to create the same effect this year with a second international film competition.

According to the faculty, the film has helped to double the number of international master’s students coming to the faculty from abroad from 37 to 75. This means ‘more money in the bank to the University of Copenhagen’, the faculty writes in a press release.

The film medium is good to «‘de-nerd’ and to humanise the natural sciences, which are actually exciting and meaningful«, says Joakim Groth, Director of communications at the Faculty.

Moves your prior conceptions

The University Post asked the Faculty of Natural Sciences whether the cloned blonde film reinforces a stereotype of women, thereby attracting more male students to a Faculty that has a lot of men already.

Not so, says Svend Thaning, a journalist at the faculty’s communications office. 30 of the 75 new international students are women, he explains.

No-one has asked the 30 new female international students about whether they were attracted by the film: But the fact is that 30/75 is a higher women/men ratio than the faculty as a whole, which consists of several traditionally male-dominated subjects.

The film, which actually was only number two in the official competition, is not actually a cliché, he says:
»You take the cliché and you twirl it around in the air. It is not a problem that the film shows female beauty in connection with the Natural Sciences. The film is actually good because it takes the cliché and pushes it. It relates to the viewers prior conception and moves it to a new place,« he says.

Marie Bruvik Heinskou is a gender studies researcher at the Department of Sociology in the University of Copenhagen. She does not find that the video somehow ‘undermines’ or moves a current gender stereotype.

»Note that when the men disappear from the laboratory and only women are left, the women are all back in their short dresses, in a form that satisfies the masculine gaze. To be quite honest, I don’t think it ‘pushes’ any stereotype anywhere,« she says.

If the video is in anyway controversial it is the implied approval of cloning humans, something that may or may not put it into bio-ethical deep water, she explains.

»If anything the automatic fixation onto the gender-political aspect of the video, obscures people’s awareness of this wider issue,« she says.