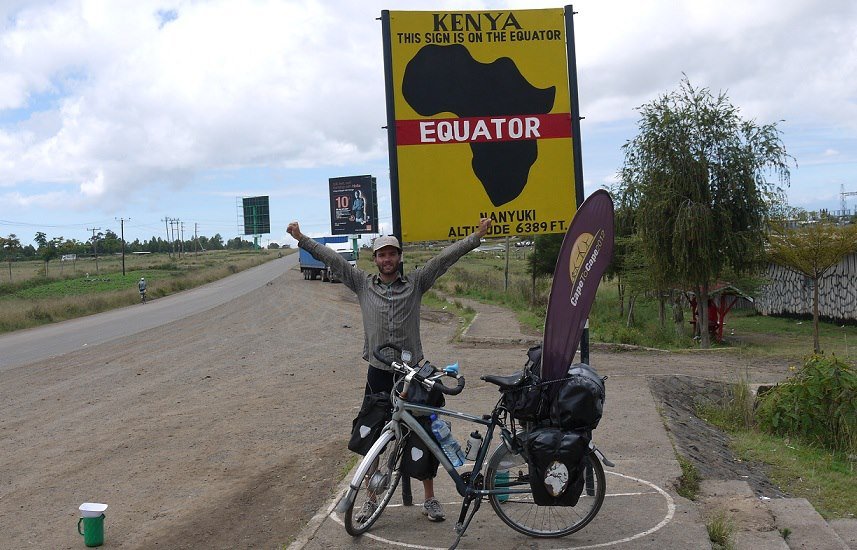 image: Gijs poses on the equator

Currently riding through Africa, Gijs sent out an update on his current situation and recent thoughts on the journeys latest leg.

A University of Copenhagen alumni, Gijs Stevers is biking from the North Cape in Norway to the southern tip of Africa to raise awareness and learn more about reneawable energy.

»When I planned cycling from Cape to Cape I knew there would be a few “hurdles” to take. The biggest hurdles to jump were called: ‘Sudan, never a shady moment’ and ‘Ethiopia, never a flat moment’. With sheer excitement I can now say I managed to jump both. I survived one-hundred-eighty-kilometer days straight through the 45 degree dessert and climbed mountains up to 3000 meters tall.I would love to say “that was easy”, but it was not«.

»Today I visited Isaac. He works at a Geothermal power station in the middle of the Kenyan rift valley. As the power station is located in Hell’s Gate National Park I had to cycle right through a territory with lions and zebra’s to get there!« informs Gijs, currently in Kenya

Not only has Gijs been cycling but he has also been participating in local events which includes running marathons, as he recently posted an update via social media saying:

After crossing the equator last Thursday and surviving stone-throwing Ethiopian kids, Gijs thinks that ”being in the northern hemisphere is so 2011”. His journey so far has seen him travel through countries such as Denmark, Germany, Turkey and Egypt. Currently in the home stretch, he is riding through the African continent towards his final destination, South Africa

If you wish to follow more of the journey’s progress or to find out more about the project click here.

Stay in the know about news and events happening in Copenhagen by signing up for the University Post’s weekly newsletter here.>