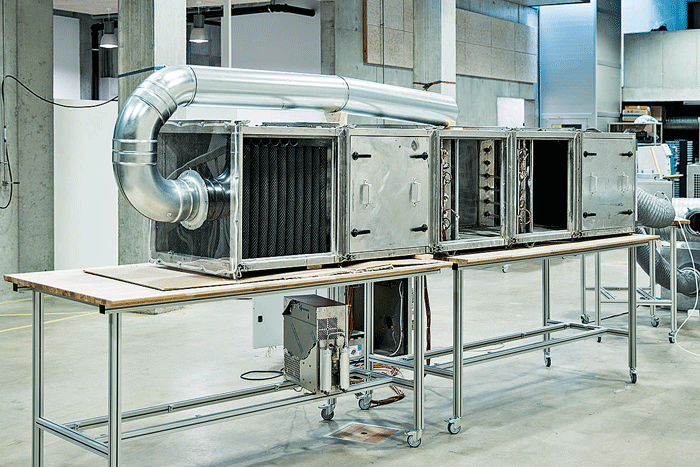 He developed a machine that purifies air. Now a Danish company has bought the patent from the University of Copenhagen and is producing purifiers for worldwide use and multiple applications

He had been researching the atmosphere for decades.

Then, seven years ago, Professor Matthew Johnson of the University of Copenhagen (UCPH) got an idea for a new type of air purifier. This led to the founding of the Danish company Infuser in 2012, which recently bought the patent from the university to produce the purifiers for customers worldwide.

Things move fast. Infuser got DKK 20 million from investors to develop the air purifier, and UCPH helped negotiate and make the product ready for market. Since then, international investors (from London and Malaysia in particular) have invested DKK 40 million.

“A solar power plant in Chile has just ordered a large purifier from Infuser to deal with NOx,” says Matthew Johnson. “And in London, another company, AirLabs, has plans to build a bus shelter in Oxford Street that purifies the air”.

Working with others and bridging the gap between science and business was essential to Matthew Johnson: “I am a chemist and I work with something that’s abstract and theoretical. I could never have developed the air purifier if I had been alone with the task,” he says.

His eyes were opened to this possibility in 2008 on a trip to get an ozone generator needed for other experiments in Malmö, Sweden. There, Johnson met the director of O3 Technology AB, Jan Arlemark. Arlemark knew everything about air purification requirements – a common issue for industrial companies.

“It was in talks with Jan Arlemark that it dawned on me what building engineers and technicians are looking for when they have to clean the air in buildings,” says Johnson. With Arlemark as co-inventor, the two of them were soon collaborating.

Afterwards they developed an entirely new kind of air purifier, which Johnson – together with postdoc Jimmy Heimdal, employee at the Department of Chemistry at UCPH – installed in a container. In 2012, after proving that the air purifier could clean 90% of LM Windpower’s styrene emissions, Johnson felt that they had had a breakthrough:

Chemists clean up the office smell

“Now we had something that worked on a large scale in an industrial environment, and we could prove that it worked!” he says.

Investors were interested and Infuser was founded that same year. Under a global license deal with UCPH, Infuser has the rights to produce the air purifier all over the world. The company expects to turn a profit in the first half of 2016.

The University of Copenhagen’s former Faculty of Life Sciences made a short film about Matthew Johnson’s project in 2010. You can see the video and read more about the project here.

Read more how the air purifier works in the fact box to the right.