Cholera kills in Africa – Gildas fights it in Copenhagen 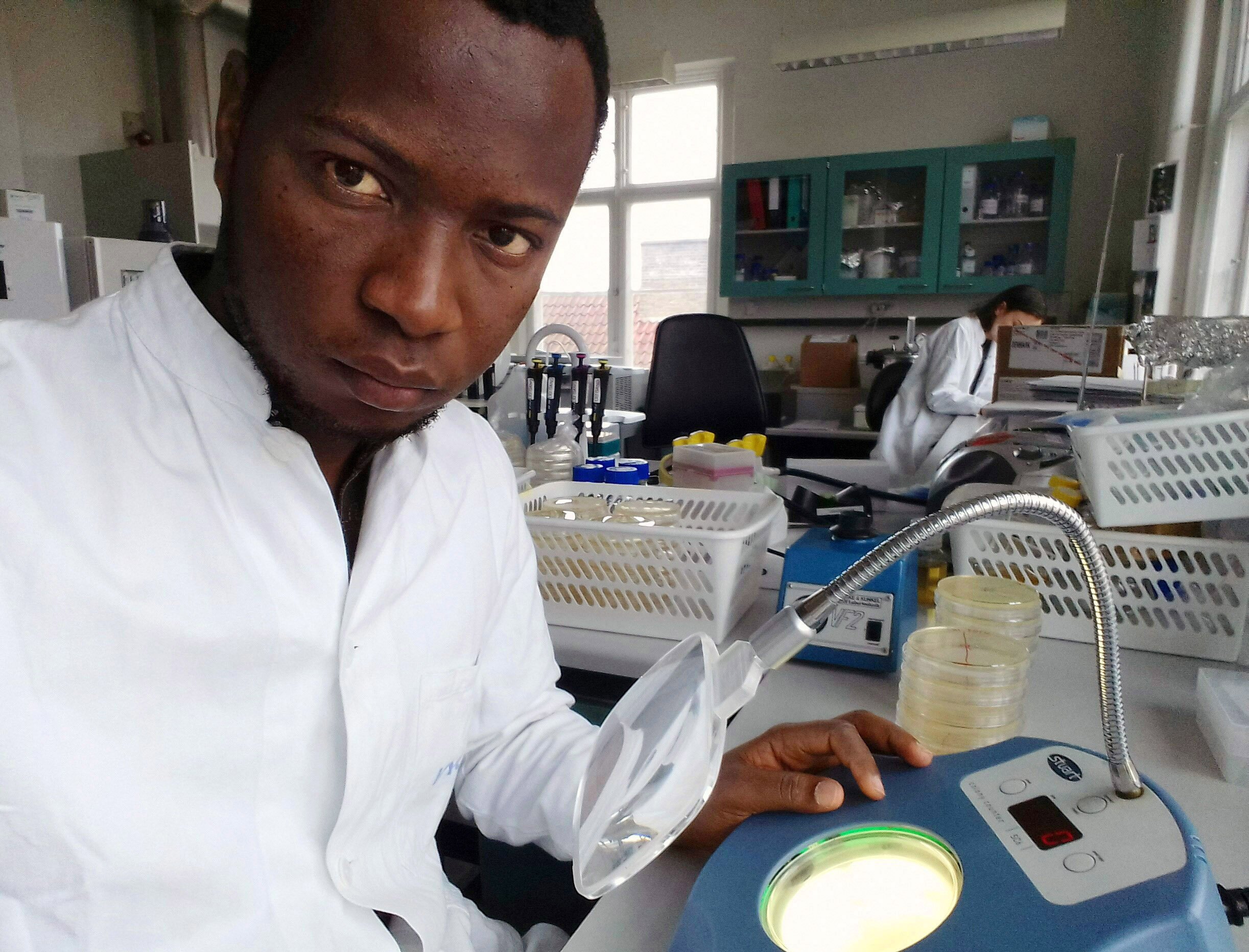 Gildas Hounmanou counting bacterial colonies in the Bacteriology Lab 401 at the Faculty of Health and Medical Sciences at the University of Copenhagen.
image: Malene Spiegelhauer

Public Health — For the 27-year-old Gildas Hounmanou, education was the way out of poverty in a small village in Benin. Now he is doing his PhD at the University of Copenhagen (UCPH) with one goal in mind: To fight the outbreaks of cholera that ravage large parts of Africa.

Gildas Hounmanou from Benin has a mission with his PhD research at the University of Copenhagen: He wants to fight the many outbreaks of cholera in Africa.

Gildas Hounmanou has been a PhD student at the Faculty of Health and Medical Sciences at UCPH since December 2016 – doing exactly what he wants to do with his life.

“My stay here is fantastic and the best that could happen to me. It gives me some options that I really want to exploit,” says Gildas Hounmanou.

Cholera is a terrible disease in which bacteria in the intestine produce a toxin. It makes the patient secrete too much water, up to 24 litres a day. You will die unless you get liquid mixed with salt and sugar – the only effective treatment.

The ultimate goal for Gildas Hounmanou is to understand how cholera bacteria live and spread in aquatic environments in Africa and how they spread to humans. He also wants to find out how different strains of cholera bacteria are related and spread between African countries.

This knowledge can be an effective means of controlling cholera outbreaks on the large continent where the disease is rampant. Cholera does not exist in Denmark, where sanitary conditions have become so good that we are no longer infected with it. But elsewhere the disease costs thousands of lives.

When I get back to Benin, I have to expand my farms to give employment to my younger friends who would otherwise be unemployed

In Tanzania alone – between 1974 and 2017 – there were 17,714  deaths due to cholera. This corresponds to an average of 400 deaths a year. Worldwide, the UN World Health Organization WHO estimates that up to four million people are infected by cholera each year, and that 143,000 die. Most of them are Africans.

Grew up in a poor village

Gildas Hounmanou grew up in a small village in his homeland in West Africa, where there – literally – were no books to read, no knowledge to gain, and no money for his further education.

However, he was fortunate to receive financial help from the Børnefonden – a Danish aid group, and various stipends. In this way he was able to succeed in getting a primary education, a bachelor’s degree in Benin and then a master’s at a university in Tanzania.

Today he works within the framework of a DANIDA-supported project, which also enabled him to come to Denmark. The Faculty of Health and Medical Sciences at UCPH co-finances his PhD.

The biggest obstacle in getting here was getting hold of a visa to Denmark because of the authorities’ requirements. Getting into UCPH, on the other hand, went smoothly.

“This was no big deal. I also had experience in researching and publishing scientific articles,” says Gildas Hounmanou.

At the Faculty of Health and Medical Sciences, his daily work is to teach and work in the laboratory. The rest of the day he evaluates and develops new experiments.

He describes himself as a very active person, who also has the energy for other stuff.

“In my spare time, I often play soccer or volleyball in the small park behind campus in Frederiksberg, and I like dancing too, or I just spend my time doing something fun,” he says.

Since 2nd June Gildas has been in Tanzania, East Africa, to collect cholera bacteria samples for his PhD study. This winter, he returns to Copenhagen with the tests.

Gildas Hounmanou and his PhD at UCPH:

Gilda’s Hounmanou’s PhD project has the working title: “Ecology and phylodynamics of Clinical and environmental Vibrio cholerae in Tanzania”

The title may change slightly because Gildas Hounmanou will also include cholera samples from Benin and plans to expand the description of the main topic.

His supervisor at the Faculty of Health and Medical Sciences, UCPH, is Anders Dalsgaard, Professor of Veterinary Public Health at the Department of Veterinary and Animal Sciences.

In Tanzania, he is doing other work beside his work with the PhD, and this may seem surprising to Danish students.

“I farm in Africa to make money. I grow and breed poultry,” he says.

When he explains what it’s all about and what he wants to do with it, you get the impression of a man who has the ability to think beyond himself and his own world.

“When I come back to Benin with my PhD from Copenhagen in December 2019, I want to expand my farms to give employment to the young friends I have down there who would otherwise be unemployed,” says Gildas Hounmanou.