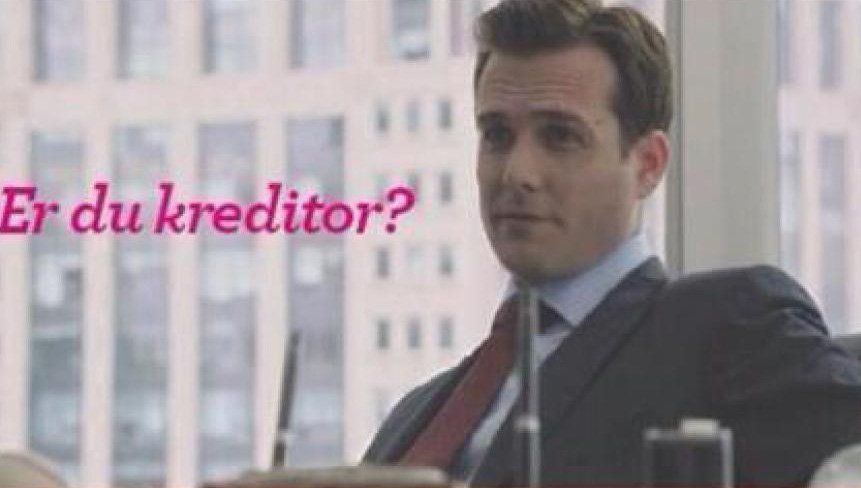 The poster's top half, a picture of the actor Gabriel Macht in his role as a lawyer in the TV series 'Suits'. The lower half is a real photo of a poor and old homeless man on the high street of Copenhagen. It says: 'Are you a creditor or a debtor?'
image: Juridisk Diskussionsklub

A law student organisation at the University of Copenhagen has been criticised for a party poster, which was said to be crossing a line. Ida Nordland uses this example to take a look at a peculiar phenomenon: Danish humour

The poster shows a picture of high-class lawyer Harvey Spector, one of the main characters of the American television series, Suits.

Spread across Harvey Spector’s picture are the words “Are you the creditor?” Underneath is a picture of an actual homeless person begging in the streets of Copenhagen, accompanied by the words “…or are you the debtor?”

The guests of the theme party were then left with the choice of attending the party dressed up in suits as businessmen or as a homeless, derelict person.

The poster for the theme party caused so much of a stir on social media that the organisation had to remove it and give an official apology. Among the critics is the Danish comedian Lasse Rimmer who shared the poster with a scornful comment about law students, who he called “self impressed douchebags”.

Other debaters defended the poster and pointed out the right to make politically incorrect jokes, as this is a deeply rooted part of Danish humour. Some argued that people were being overly sensitive about the poster.

The president of “Juridisk Diskussionsklub”, the organisation who made the poster, says to the Danish newspaper Metroexpress that they never intended to cause a fuss and in retrospect are aware of the offensive nature of the poster.

Why so much fuss?

Danes are known to be considerably thick-skinned when it comes to joking, so why then was this poster found to cross the invisible line of humour? Danish humour is characterised by using a considerable amount of irony. As explained by integration expert Mehmet Yüksekkaya to Danish Newspaper Kristeligt Dagblad, Danes are proud to say that it is possible to make fun of everything and everyone, from politicians to the Danish Queen – you can even joke about religion.

Danish politician Naser Khader has said in lectures on Danish humour that the bluntness of Danish humor can be traced to a scepticism of everything authoritarian. The lack of respect for authorities also mean that literally nothing is “holy” in Denmark. Everyone has to tolerate jokes to a certain limit.

The most famous example of misunderstood “Danish humour” is the “Mohammed Cartoon” incident, which caused a crisis for Denmark a couple of years ago. The cartoons lead to fury in the Middle East, including protests, burnings of the Danish flag and boycotts on importing of Danish goods.

Another well-known example of Danish humour gone wrong, was when Danish movie director Lars Von Trier made a joke about Nazis, at a press conference in Cannes in 2011. It got so much negative press that Trier has given himself a restraining order against talking to the press, which means that he has refrained from giving any interview since, even in relation to his new movie “Nymphomaniac”.

Law students with an image-problem

The critical comments on Facebook quickly reveal that largely the reason for the strong reactions to the homeless-poster is the negative perception of law students. People are provoked by the fact that the joke originates from people who are believed to be rich, greedy and snobbish.

Class society as one of the major taboos

Another contributing factor might be that one of the only taboos in a relatively equal society as Denmark is making jokes about class difference.

Former minister of Social Affairs Eva Kjer Hansen got into trouble after making statements about inequality, in a much-debated interview in the Danish newspaper Jyllandsposten in 2005.

She stated that, in her opinion, inequality in Denmark should not be feared, because it might create certain dynamics, and that it might be time for a revision of the thought that everyone should be “equal”. Her opinions on inequality caused so much fury among the opposition, that they have stuck to her reputation, even though she ended up retracting her statements. Ever since then it has been demanding to get a right wing politician to make statements about inequality, because they are simply unwilling to utter the word.

It might be the combination of addressing the Danish taboo of inequality while making fun of the less fortunate, that makes the poster offensive to many Danes. Presumably the line is drawn at “kicking someone who is already down”.

However, would the reactions have been different if a student organisation at the Police Academy had made a poster with an invitation to a party with a ‘Police and burglar’ theme? The question becomes whether Danish humour should be protected, or if Danes should simply accept that there are some groups in society you are not allowed to make fun of.

What do you think? Was the poster out of line or a harmless joke?

(This article was originally published on Pandeia, a network of student journalists and partner of the University Post. Find the original article here)