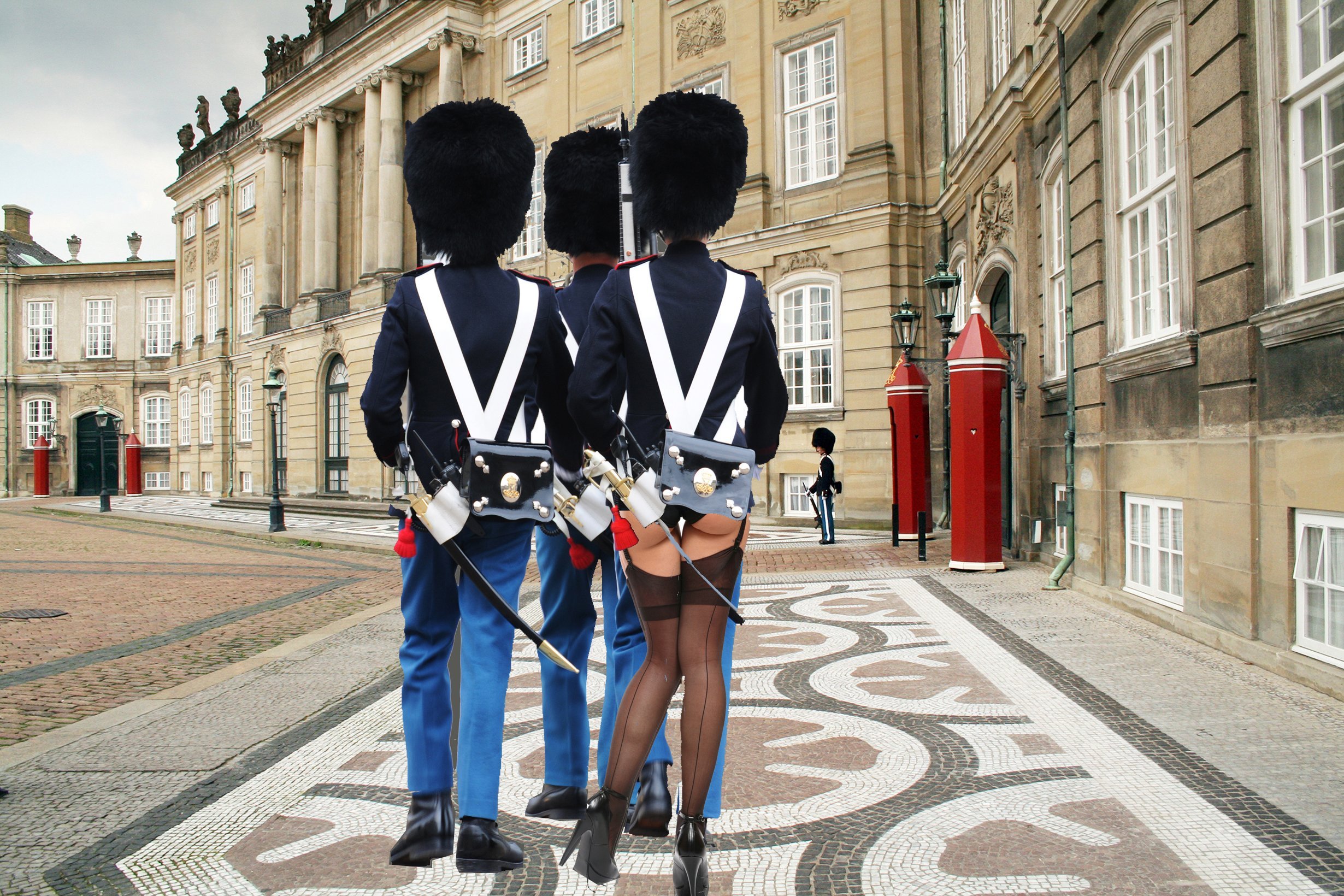 Danes are quick to take their clothes off, but slow to open up to others
image: Kay Xander Mellish collage based on photo material from thinkstockphotos.com

Why your Danish neighbors won’t talk to you

Shortly before I arrived in Denmark in 2000, one of the famous guards outside the queen’s palace at Amalieborg was fired. You’ve seen these Royal Life Guards on postcards: they’re dressed like the British palace guards, only with dark blue coats instead of red. They have the same tall, black, bearskin hats. It’s no big secret that being in the Royal Life Guards is an excellent path to a powerful future in corporate Denmark.

Anyway, the guard that was fired was special. She was the first woman to guard the Royal Palace at Amalieborg. There was a lot written about it in the newspapers at the time. Unfortunately, this young lady also had a part-time job. She was a prostitute. She would guard the palace by day and run her business out of the royal barracks in the evening. She found customers via escort ads in the local newspapers.

The Danes I talked to didn’t find this case particularly shocking.

“It’s her private time, when she’s not at work,” they told me. “She can do whatever she wants in her free time.”

That was my introduction to the Danish passion for privacy and protecting their private life.

The word private, itself, is used a lot. You’ll hear Danes talking about their ‘private economy’, which means their personal finances.

Two of your colleagues may say that they ‘know each other privately’, which does not mean they’ve seen each other without underwear. It just means they get together on weekends.

Where this relates to you as a foreigner is when the Danes around you – your colleagues, your neighbors, the people sitting next to you on the Copenhagen metro – don’t want to invade your privacy. This is why they’re not talking to you.

Now, let’s say I, as an American, saw an African family move into my apartment building. I would think that was pretty interesting. I’d probably want to chat with them about where in Africa they came from, what they were doing in Denmark. Maybe bring them some American cookies and see if I could get invited to a meal to taste some food from their country.

The African family might, from their perspective, see this as Danish unfriendliness. Danes are cautious about new friendships; they take friendship seriously, seeing it as a lifetime commitment, and don’t want to start anything they can’t finish.

Why I Google my neighbors

I will admit here that I have resorted to Googling my neighbors to find out who they are and why they might be using a chainsaw at 10pm on a Saturday night.

In Denmark, everyone knows your age. It’s part of your CPR number, which you use for every contact with the government, even checking out library books.

If you call to set up an appointment with your doctor, you’ll need to give that number, which includes your birth date. Your age is not private in Denmark. On the other hand, your personal choices are very private.

When I lived in Hong Kong, local Chinese people I had just been introduced to would ask me “Why aren’t you married? Don’t you want children? You’re getting awfully old.”

That’s not the kind of stuff people in Denmark want to discuss with strangers. They also don’t do much office gossip, about who is sleeping with whom, or who is cheating on his or her spouse. That’s considered private.

And some things are private because they are considered embarrassing. Like ambition.

Ambition is embarassing in Denmark because it suggests that you want to be better than someone else.

In an egalitarian society, that’s very bad manners. A recent survey showed that 68% of Danes are not interested in being promoted at work. Maybe that’s because, if you get promoted, whatever additional income you get mostly goes to taxes.

But maybe it’s because some Danes were too embarrassed to tell the survey taker that they wanted to get ahead. Ambition is private in Denmark.

Religion is another thing that is very private in Denmark. Even though Denmark is officially a Christian country, and the queen is head of the state church, to be openly Christian and talk about Jesus or being saved is considered bad manners. It will make most Danish people very uncomfortable. Many Danes see religion as sort of a security blanket for backward, uneducated people. This is one of the many reasons Danes have so much trouble understanding their Muslim minority.

Speaking of religion, my Danish friends have a lot of contempt for the Bible Belt in the U.S., where people loudly declare their religious fervor and if you’re, say, gay, you’re expected to hide it, keep it to yourself.

In Denmark, if you’re gay, you can tell everybody – but if you’re religious, particularly deeply religious, you’re expected to hide it, keep it to yourself. That kind of thing is private.

This featured comment is an excerpt from Kay Xander Mellish’s new book: How to Live in Denmark: A humorous guide for foreigners and their Danish friends. It’s available on Amazon, for the low-low price of USD 8.88 = DKK 50 (plus value added taxes if purchased in Denmark). You can also buy the book on Saxo.com. And on iTunes store.