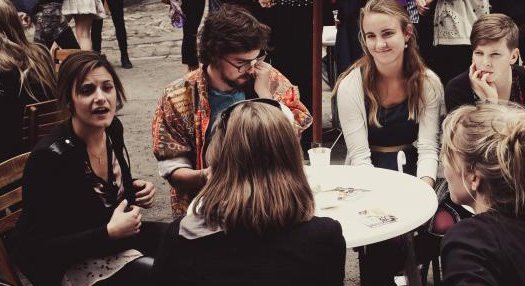 From a Matriculation Ceremony at the University of Copenhagen. A conversation is not just a conversation
image: Adam Garff

Find it tough to talk to Danes? It could be that you just have a different cultural approach to chitchat. American in Copenhagen Alex Berger reflects on the conversational style of Nordics

It is something Americans hate. In your typical American conversation you’ll rarely find such a thing as a comfortable silence, a reflective silence, or a natural silence. For the average American in a normal conversation there’s really only one type of silence and that is awkward silence. A type of silence that we’re taught from childhood to avoid at all costs.

This stems in large part from the American conversational approach which I think can best be described as conversational layering with each person quickly layering on new overlapping information in rapid succession. Add in the fast-paced rapid-fire approach to speaking common among most Americans and you’ve got a recipe for frustration and perceived arrogance when talking to Nordics / Scandinavians (and other internationals).

Unlike Americans, Nordics/Scandinavians have a conversational culture which treasures the silences. This comes from a significantly increased comfort with silence compared to their American counterparts. Nordics/Scandinavians have a very turn-based structure and style. While the Finnish are notorious for the slow pacing of their conversations and their extreme comfort with what would otherwise be considered painfully uncomfortable periods of silence, it is a trend present to a lesser extent across all of the Nordic countries. The result is a conversational practice which is heavily turn based with definite gaps to signify the closure of a point. In this way a traditional Nordic conversation much more closely resembles the structure of formal debate than a round table free-for-all discussion.

Due to the near bilingualism of most Nordic citizens and the fact that many also speak American English with very mild accents, it is very easy for non-native speakers to forget that the Nordics are still not quite native speakers. This means that when the conversational silences occur during the natural flow of a conversation, they are amplified because of the added need to process, digest, and periodically search for missing words. Something confounded when talking with native English speakers due to our heavy use of regional slang and provincial idioms.

In discussions with Danish friends and by closely exploring my own conversations, I’ve come to realize that this translates into a certain level of frustration among Nordics when talking with native speakers. It can often translate into the perception that the American (or other native speaker) is arrogant, dismissive, not paying attention, and/or rude. Keeping in mind the two conversational styles I mentioned previously, here are a few areas where I’ve watched issues arise.

A common American practice to show continued engagement with a conversation is to give constant positive feedback. This can either be gestural (movement) or verbal (spoken) and comes in a variety of forms but usually includes movements such as head nods, finger pointing, and shoulder shrugs while the verbal includes words like “uhhumm”, “yup, yup, ya”, or “definitely”. While these are intended and expressed by Americans as a way of confirming engagement with the conversation, filling small gaps, and expressing agreement, interest or sympathy, I’ve found they often confuse non-native speakers who see them either as an interruption, inquiry, or dismissive attempt to speed the person up.

Because we don’t employ nearly the same type of strictly turn-based conversation flow, as soon as there’s a brief pause it is viewed as an opening for responding. While this can be a challenge even among native speakers, it is a much larger issue when speaking with Nordics who often feel interrupted, ignored, or talked over. This is where the two conversational styles clash the most dramatically as the Nordic is often pausing to collect their thoughts, breathe, and then continue their point at what feels like a comfortably rapid pace with the expectation that their conversational partner will similarly understand that they’re still expressing their whole thought before advancing the conversation. For Americans, particularly if they’re highly engaged in a conversation, they’ll endeavor to keep it moving at a fast pace in a rush to share ideas and thoughts. This means that anything more than the briefest pause to breathe will be viewed as either an opportunity or outright invitation to speak with longer gaps viewed as uncomfortable pauses. There is also a difficult to express set of rules for when you can interrupt for more clarification, disagreement, or to add details. Which in turn sometimes leads to conversational processes that override these acceptable interruption such as, “No, no, no, let me finish…” and other statements which, while still present, seem to be radically less common among Nordics.

Nordics take pride in saying something simply and are famous for their directness. I think this is partially cultural, but also comes from the nature of the Nordic languages which are often highly contextual and descriptive but tend not to have the same depth and breadth of synonyms as English. The lack of a word for ‘please’ in Danish is one such example of this in action. Nordics in general tend towards a more direct way of interacting with each other conversationally, particularly in the workplace, which can be quite shocking to Americans, particularly those from the Midwest and western part of the US where politically correct politeness is taken to an extreme. The end result is that not only do native speakers opt for longer and more complex sentences that may be necessary or popular among their Nordic counterparts, we will also use these subconsciously to fill or outright avoid uncomfortable silences. Where a simple “yes” might do, you’ll find ample situations where a long explanation or carefully framed answer is delivered instead.

The Nordic inclination towards increased levels of silence and more complete but less common responses can lead to perceptions of unhappiness, boredom, and discontent. Since these attributes are often associated with conversational discomfort or disengagement among Americans, it is entirely possible for a fully engaged Dane to come across as upset or disconnected from the conversation. Which in turn tends to leave Americans feeling inclined to fill any silences that exist, change topics, or ask outright what’s wrong – often to the complete confusion of the Nordic in question.

Out of our aversion to silence or disruption to the conversational flow and pacing when another individual (Dane, Nordic or American) is struggling with recalling a word or over a word’s pronunciation it is common practice among many Americans to jump in and provide that word. This is in part an extension of the affirmation behavior I mentioned earlier – showing we’re paying attention and invested in the conversation – as much as it has to do with preventing an uncomfortable silence. However, to non-native speakers it can also come across as disrespectful by being seen as a reminder of the individual’s lack of native fluency or linguistic/conversational competence. It’s important to note that this ‘helpful behavior’ is something that native speakers do with each other all the time. Theyoffer it as an act of general politeness not from a position of judgement or superiority.

It’s Not A Perfect Science

While I’ve drawn these insights primarily from my time spent here in Denmark engaged inc conversations with Danes, they’re based on more widespread trends which can be traced throughout the Nordics/Scandinavia. I think many of these behavioral and conversational characteristics are also relevant when considering conversations with other non-native speaker from other cultures and regions globally. I’d love to hear what your thoughts are, particularly if you’re a non-native English speaker.

Do you agree or disagree with me? I am looking forward to reading your comments below!

This article was originally published here.