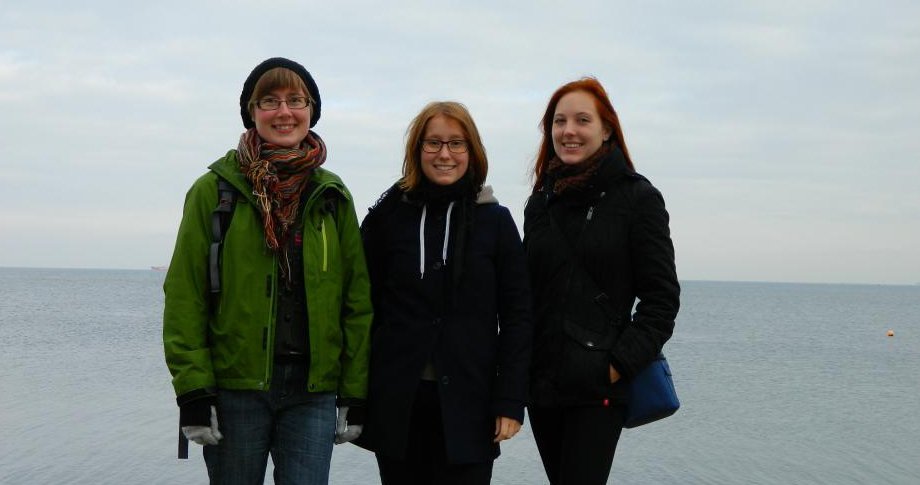 Birgit (left) with friends in Copenhagen. "In Germany, they say, your echo returns the same way you yelled into the forest."
image: Birgit Grundler

In Germany, they say, "your echo returns the same way you yelled into the forest". Birgit reflects on a life back home in Mainz, Germany after six months in Copenhagen

“How do you pick up the threads of an old life? How do you go on when in your heart you begin to understand, there is no going back?”

Okay, I’ve not been to Mordor and saved Middle-Earth, I’ve just been on an Erasmus exchange to Copenhagen for six months.

But this quote from Frodo perfectly sums up the essence of what it felt like when I returned from glorious, shiny Copenhagen to apparently dreary, boring Mainz, a town with roundabout 200,000 inhabitants, situated in the south-west of Germany on the Rhine. It’s a town completely different from Copenhagen. A provincial capital with small town feeling, skirted with mountains and vineyards, metropolitan Frankfurt a 40 minutes’ train ride away. The sea is far away.

To dispel all doubts, I love it here. I can hear my mother’s tongue around me again, which is comforting – well, for a German it actually is. Yet, after six months that I’m back again I frequently catch myself at being surprised at this fact. Apparently, I’m still imbued with being a stranger.

So how do you really arrive at your home country and your town of study after half a year? Which, by the way, is not a long time to be away.

How to deal with the fact that Copenhagen, my former “here”, has now mysteriously transformed into a blurry, dreamy “there”?

At first I was shocked at being at my formerly acquainted surroundings again. I think I didn’t experience what is described as “reverse-culture shock”, though. Seriously, Germany is not that different from Denmark after all.

The Rhine as the ‘harbour’

It’s more the little details that confused me. It was as if everything here had frozen in its tracks the minute I set off for Copenhagen, just to start moving again the moment I crossed the border of the town. Everything looked exactly the same, even if I knew it wasn’t the same anymore.

I caught up with my friends again. That was weird as well. For a long time they had only been a cascade of words behind a picture in the Facebook chat or at least a talking distorted face behind a web cam. Some had visited me in Copenhagen. Now they were real flesh again whose doorbell I could ring in the middle of the night, if I needed it. On the other hand, I felt that my friends in Copenhagen started drifting away from me, in a similar degree that I was losing my Danish language skills. Now it was their turn to become a silently talking profile picture on Facebook. I miss having a beer with them and a real talk.

I definitely don’t miss the wind, my constant enemy as a biker in Copenhagen. One of the benefits of living here is that the weather is always better, more sun, less rain, higher degrees.

While the harbour and Langebro substituted the Rhine for me in my first weeks in Copenhagen, now it was vice versa. Every day when I cross the Rhine with my bike, I’m reminded of Copenhagen. I even pretend to be riding to Amager sometimes.
Speaking of cycling – I guess everyone who once lived in Copenhagen misses that. Here in Mainz biking is a lonely endeavour on cycle lanes that aren’t as sacrosanct as in Denmark. If there are any at all. Alright, I often did curse bike rush hour in Copenhagen but how could I forget how awful car rush hour is on the Rhine bridge? And sometimes when I suddenly have to stop with my bike, I still have the reflex to raise my hand in warning like I used to do in Denmark.

I had to adjust to this new old reality. I felt like I had a split mind – Copenhagen with all its streets, habits and people tattooed into my brain but now another layer was put above with the old one still shining through. However, Copenhagen seemed more real to me than Mainz.

I suspected my home university to be a similarly confusing place. It is not as stylish as KUA, the southern campus at the University of Copenhagen, but I didn’t expect it to. The differences go deeper than that.

I knew I’d miss the straightforward, yet elegant Danish and English writing style, which often has a touch of humour in it.

Not to forget interaction at my university. In a pre-semester workshop I took when I came back our teacher wanted us to call him by first name and use the familiar pronoun »du« with him. It didn’t really work out. Us German students are too timid of authorities, it seems.

I knew I’d miss starting an e-mail to my professor (or anyone else) with »Hej Per« but it would feel totally wrong here. I’d be longing for my cooperative and goodwilling Danish fellow students. At German university you think more competitively and make more use of your elbows. How would I be able to concentrate for one and half an hour in a row now, I wondered, after I had got accustomed to having a break in the middle of the class?

So it would be in the academic world where I’d suffer my real reverse-culture shock. However, as the term at my German university progresses, I realize that something has changed.

In one of my lectures the professor gives us a five minute break in the middle of the session. Revolutionary. Plus, I suddenly seem to be surrounded by cooperative, peaceful fellow students – where have all the elbows gone? – and motivated, down-to-earth professors who actually are eager to teach us something and are on equal terms with us.

Okay, biking is still frustrating but yet … what has happened? Did I have such a negative memory of Germany and university here, a reverse nostalgia so to say, or have things really changed in half a year or have I after all carried some Danishness over to my old new life? Is it me, who has changed in some degree?

In German you say, your echo returns the same way you yelled into the forest. Have I, in all my homesickness, forgotten that life here isn’t bad after all?

And there are other rays of light here. Shop assistants and cashiers who sincerely smile at me. Drinks and food at a café, purchases at the supermarket and a rent that doesn’t make my purse burst into tears. Excellent beer and delicious warm pretzels. A steady income from my national scholarship and student job instead of mostly living on my savings. And last but not least, my sweet friends here. As one of my friends in Denmark said, I have people to return to. She was right.

I’m still longing for Copenhagen, though. But what exactly do I long for?

Was I after all not enchanted by Copenhagen itself but by the people I met there? I do miss my small flock of friends over there but I don’t think they are the only reason I’m still yearning for this country and especially for Copenhagen. I’d still return to Denmark for my master or at least for another Erasmus exchange, even if I knew no one there.

I’m rather allured by the feeling of living the somewhat lonely life of a stranger in a country I just knew from holidays and short stays before. Because this loneliness perfectly mirrors what I’d describe as my basic disposition. I also miss the invisible bond between all the international people in a sometimes puzzling country. But beyond all that romantic wanderlust it is Denmark with all merciless equality, progressive thinking and nice, beautiful but sometimes unapproachable Danes I long for. Of course, it would be different to live there »for real« or, as one of my Copenhagen friends called it, not as a tourist. Without the safety net of knowing I’ll be returning home for good in a few months.

I never had the stereotypical Erasmus experience, even if I might have lived up to some of the clichés. My friend was wrong, I never felt like a tourist in Copenhagen, even if I was a somewhat privileged inhabitant because I wasn’t forced to leave my home country to start a new life there.

In mid-June I am in Copenhagen again for some days to visit a friend of mine. I see familiar places and faces. They turn out to be still familiar. Again, it’s like I had never been away, as if everything had stopped in its tracks since I left, even if I know that is not true. But – well, I’m back.