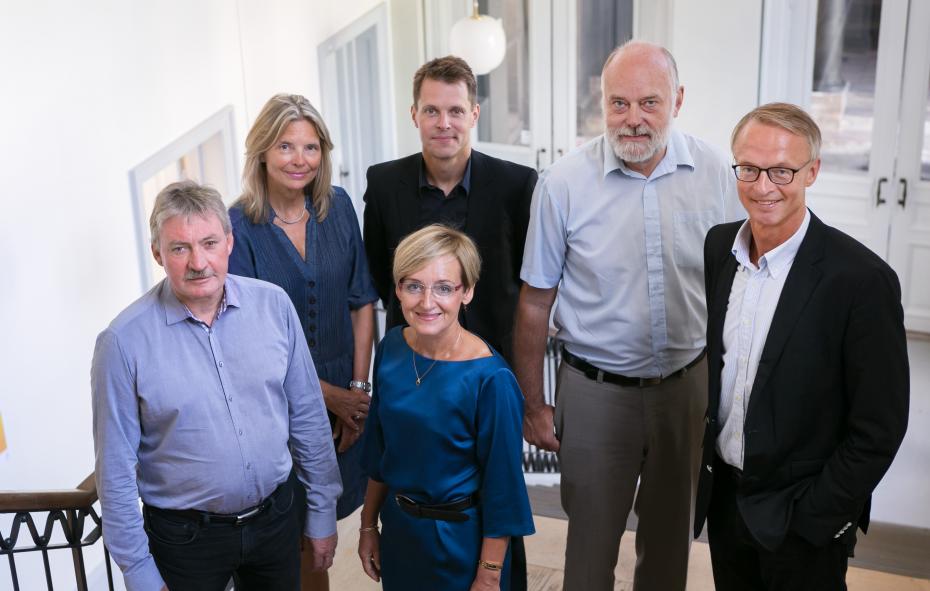 A proposed merger between MATH and DIKU has met opposition and criticism from the staff at both departments. But a merger will improve conditions for students and staff, strengthen research, improve administrative support, augment external collaboration and bolster fundraising. Featured comment from the faculty management of SCIENCE

The faculty management at SCIENCE has proposed that the Department of Mathematical Sciences, MATH, and the Department of Computer Sciences, DIKU, be merged from January 1, 2015. The proposal has met opposition and criticism from the staff at both departments. The faculty management at SCIENCE is of the opinion that a merger will improve conditions for students and academic and administrative staff at both departments and strengthen research in areas of academic convergence in the mathematical and computer sciences, as well as with other subject areas. It should also improve administrative support for research and educational programmes, augment external collaboration and bolster fundraising opportunities. These expectations impose high demands of a merger. However, experiences from previous UCPH mergers demonstrate that accomplishing them is possible

Concept behind the merger

On September 15, SCIENCE Faculty Management sent an e-mail to all MATH and DIKU staff and students explaining why management wishes to merge MATH and DIKU. In this feature, faculty management will elaborate upon the main arguments and ideas behind the proposed merger.

It is the responsibility and ambition of SCIENCE faculty management to tighten up and strengthen the organization so as to preserve and strengthen the faculty’s overall robustness and dynamism. Therefore, SCIENCE management has proposed that MATH and DIKU be merged, and believes that a consolidation will contribute to:

Departments are the critical component

SCIENCE is based upon the idea that the Faculty’s most critical component is its departments. This is reflected in the organizational structure and in SCIENCE’s management and budget models. It is faculty management’s view that a merger of MATH and DIKU will provide a necessary strengthening of the two departments, of the academic environment and of interdisciplinary collaboration between departments, and subsequently, a reinforcement of SCIENCE’s foundation.

The SCIENCE model provides an individual department with great autonomy, the grounds for investing in instruction and research and for reaping their own rewards with opportunities for further departmental development. The model is a foundation for the strong inter-departmental academic collaboration necessary for world-class research and training.

The SCIENCE model is one of the main factors behind the incredibly positive evolution of SCIENCE in recent years – in the areas of research, educational programmes and finances. Prerequisites for the SCIENCE model’s success are the adequate size of individual departments and that they have a critical mass running within. A department should be able to, both alone and together with other departments, engage in sizeable research and educational programme efforts, as well as be able to effectively enter into sustainable, joint operational support for what are its core activities.
This is also vital to be able to contribute to solving the types of extensive interdisciplinary challenges supported by large national and international funding bodies. The model is a foundation for a robust faculty characterised by its dynamism and impact in both national and international contexts.

Faculty management’s view is that MATH and DIKU are departments that do not have sufficient critical mass, robustness or organisational strength to support the SCIENCE model. A merger will allow management to strengthen the combined academic environment, which is a necessary aspect of strengthening SCIENCE’s foundation as a whole and interdisciplinary, inter-departmental collaboration.

Areas of academic convergence to be developed

Important areas of academic convergence should continue to be identified and cultivated in a targeted manner when and where there is a need. At potential junctions between the mathematical and computer science, there remains untapped potential related to research, education and collaboration with private and public sector organizations. With a merged MATH and DIKU, management desires to strengthen combined efforts in these areas.

Big data, statistics, modelling and image editing are examples of the academic areas where SCIENCE can and should be strengthened.

Currently, faculty management believes that the individual departments have not done enough to cultivate research and education in convergent subject areas with a commitment that matches overall potential. A merger will catalyse future development in these areas.

The SCIENCE model is based on the premise that departments provide services for one another within their core competencies. MATH and DIKU have not been able to do this to a degree that matches their potential, or in relation to their share of the SCIENCE budget that they manage.

High performance computing, computer science consultancy services, big data and data storage are examples of fields where SCIENCE departments need to draw from the cutting-edge competencies found in the MATH-DIKU academic environments. A merger will contribute to improving the academic environment’s overall ability to enter into interdisciplinary initiatives and services.

During the 2012 faculty merger, it was decided to carry on the statistics consultancy services based at the former LIFE faculty. But this was only possible if the faculty paid for the expenses that MATH accrued during the provision of these services.

Private and public sector collaboration is of critical importance for SCIENCE and the academic environments at MATH and DIKU. It matters now, and become more important in years to come. To begin with, DIKU and MATH have relatively few external collaborative ties in relation to many of the other SCIENCE departments. But there is enormous potential. Extensive external collaboration is better supported in the departments with a critical mass to perform these types of tasks. If one compares with the NEXS-merger, (see Department Head Arne Astrup and his experience at the Department of Exercise, Nutrition and Sports) the experience illustrates that funding increased after the merger of the human nutrition and exercise academic environments.

SCIENCE faculty management’s response to criticism of the merger proposal

Staff and students have been critical of the proposed merge between MATH and DIKU at both public meetings and collaboration committee meetings. Members of the MATH staff have suggested that this is an experimental merger of two departments, and that the best of the international mathematics departments do not share their department with the computer sciences. It is true that SCIENCE management cannot predict how MATH and DIKU will perform in a new department compared against how they might perform without being merged.

But we are confident that a new, merged department will be strengthened with regards to administration, finance and overall dynamism, and that the efforts to improve these parameters will increase opportunities for external collaboration, increased fundraising, increased research in academic convergence areas between mathematics and computer science, improved FTE-production and student completion rates and finally, serve to strengthen the department’s interdisciplinary collaboration with other SCIENCE departments and the rest of UCPH. Experiences from other mergers at UCPH have demonstrated that there is often protest and opposition against department and faculty level mergers, but that mergers gain longer term support and that they end up being successful. See the link related to merger experiences below.

Will a new MATH-DIKU department be less attractive for prospective students and staff?

It has been stated that a merge would blur the lines between and identities of the two subjects, and that the new department would be less attractive for prospective students and staff as a result.

In relation to the recruitment of talented researchers, management is of the view that a larger department can more effectively strengthen the new department’s administrative and finance objectives and thus secure optimal conditions for the mathematical and computer science research environments. Subsequently, the department will be more apt to attract and recruit the best national and international researchers.

Will a merger weaken UCPH’s strategy for IT in instruction?

Martin Zachariasen, Department Head at DIKU, expressed concern in the University Post that UCPH’s strategy of incorporating IT in instruction will not be carried out should a new department of mathematics and computer science be created. SCIENCE faculty management does not share this concern.

A department merger does not imply any alteration of the strategy. And, the same staff and departmental offices will be active in implementing the strategy in full.

Why will MATH and DIKU not be based in the Niels Bohr Building?

With a department merger, the plan is for the new department of mathematical and computer sciences to be based in the HCØ Building on the North Campus (their current primary location), and not, as earlier planned, to move into the Niels Bohr Building (NBB) when completed in 2017.

There is no longer enough space at NBB to accommodate the five SCIENCE departments originally planned to be there, all of which have expanded in recent years. This means that a number of departments will now be situated in other buildings. If both mathematics and computer science were to be housed in NBB, either the Department of Chemistry or Niels Bohr Institute would need to be split up – a situation that is far from ideal.

Additionally, NBB will come to house state-of-the-art laboratories. Therefore, it makes the most sense for the heavily laboratory dependent Department of Chemistry and Niels Bohr Institute to be based in the building.
Moreover, MATH department managers have indicated that MATH would like to remain in the HCØ building.

Numerous MATH and DIKU staff have requested documentation that demonstrates that a MATH-DIKU merger will improve the performance of the two departments. This is something that we cannot provide. But we can pass along our experiences from other SCIENCE mergers. There is often opposition to the merging of departments, but mergers are able to strengthen the research and fundraising capabilities of the new departments. In the contributions below, SCIENCE department heads and SCIENCE faculty management present their own experiences from the previous SCIENCE-LIFE merger and other previous mergers.

Merger experiences: See also the appendixes to this featured comment below:
1. Comment: On the merger in Nutrition, Exercise and Sports
2. Comment: Mathematical Sciences, the result of a merger
3. Comment: The merger of four departments into the Niels Bohr Institute
4. Comment: The Department of Plant and Environmental Sciences