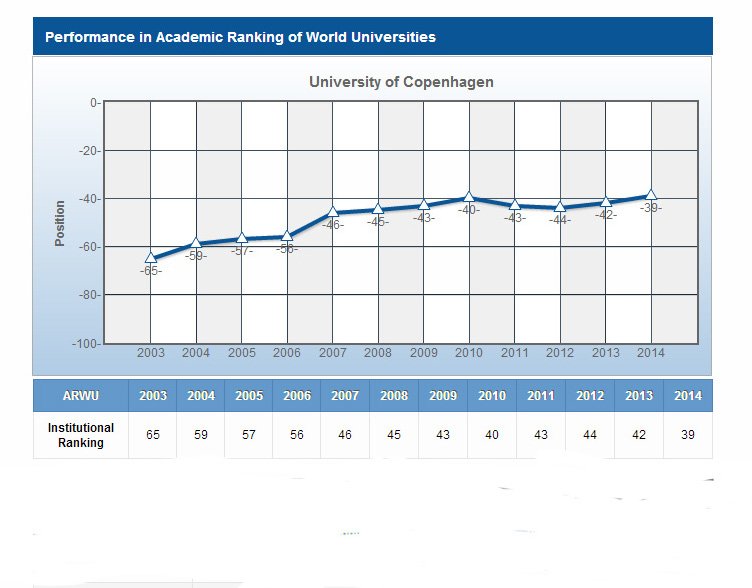 The University of Copenhagen has (almost) only gone up on the ARWU ranking in recent years. Screenshot of the rankings table
image: ARWU

The University of Copenhagen (UCPH) is the third best institution in continental Europe – only surpassed by the Swiss Federal Institute of Technology Zurich (also known as ETH) and the Pierre and Marie Curie University (Paris 6). This is according to the 2014 Shanghai ranking, the ARWU or Academic Ranking of World Universities.

UCPH ranks 39th among the world’s universities on the just released ranking, up three spots from last year. It is the broader subject fields of science and life sciences that score well for UCPH on this ranking, and this year is no exception: UCPH is up at 46th in the broader area of science, 43rd in life sciences. As for specific subject area, the University of Copenhagen is mentioned as 49th in the world in the area of computer science.

The ARWU uses six indicators to rank world universities, including the number of alumni and staff winning Nobel Prizes and Fields Medals, the number of cited researchers, and the amount of published articles, all according to the size of the institution. The University of Copenhagen boasts its top performance within the fields of natural, life, and agricultural sciences and mathematics.

Aarhus up at 74th

The United States dominates the top of the ARWU world ranking with Harvard coming in first, Stanford second, and Massachusetts Institute of Technology (MIT) in third.

Aarhus University, the other large Danish university institution, has also had a good ARWU ranking year. It moves up to 74th from 81st.

See the full rankings on the pdf file below or via the Shanghai rankings site here.