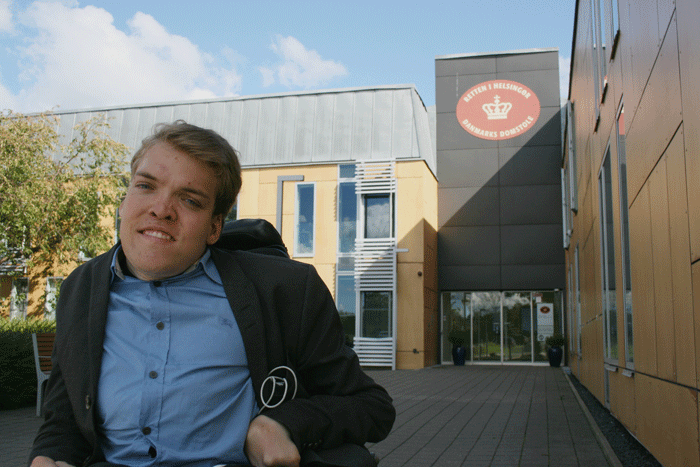 Law student Kristian Hegaard’s complaint about the teaching in Tax Law was so 'trivial', that it cannot be considered defamation. Ruling from the Helsingør district court

“I am pleased, but not surprised ,” says Kristian Hegaard after a district court in Helsingør has acquitted him.

He had been accused by his teacher, lecturer Michael Bjørn Hansen, of defamation because he had sent a complaint about the teaching of Tax Law to the university.

“I’m not surprised, because my complaint had been accommodated by the university, and because many students also supported the appeal and declared their agreement with it. And the student ambassador also expressed that it was an appropriate complaint,” says Kristian Hegaard.

The court acquitted Kristian Hegaard because his complaint about the lack of group work in Michael Bjørn Hansen’s teaching was of such a ‘trivial nature’ that it could not be considered defamation.

“The Court finds that the statement is of a completely trivial nature. The statement is neither in itself, nor in view of the circumstances under which it was made, capable of dishonouring Michael Bjørn Hansen or reducing Michael Bjørn Hansen esteem in the eyes of his fellow citizens. There is therefore no reason for a defamation charge referring to penal code §267 that may be canceled pursuant to penal code § 273. Kristian Hegaard is therefore acquitted of the charges,” it said in the court judgement, as quoted in Frederiksborg Amtsavis

The court did not consider whether groups were formed or not.

As a consequence of the ruling, Michael Bjørn Hansen is to pay trial expenses of DKK 31,250.

To Uniavisen, Michael Bjørn Hansen says that “the court emphasizes that the statement is too trivial to fall under the criminal code clauses on defamation. But that presupposes that groups were, in fact, set up. So Hegaard’s statements are not in accordance with the truth. I still think that a teacher should stand up to misrepresentations in complaints cases. I will therefore either appeal the case to a higher court, or start a case with the ombudsman public advocate. The case is not closed.”

The University’s management is also criticized for its handling of the affair by Michael Bjørn Hansen:

Student Council: Students should not be afraid to complain

Kristian Hegaard sees the ruling as important in that it ensures students’ rights to complain in the future.

“With the acquittal, it is now blindingly obvious that you can complain about your teaching without having to fear a lawsuit,” he said.

The Student Council also says that the acquittal is a matter of principle:

“It is good that he has been acquitted as students should not be afraid to complain about their teaching. It is important that students dare take a stand on their study programmes and on their education,” says chairman Malou Astrup Clemmesen adding:

“I find it unfortunate that the teacher has chosen to pursue a lawsuit instead of recognizing that students have an active role in making teaching better and that the students’ contributions can lead to a better university.”