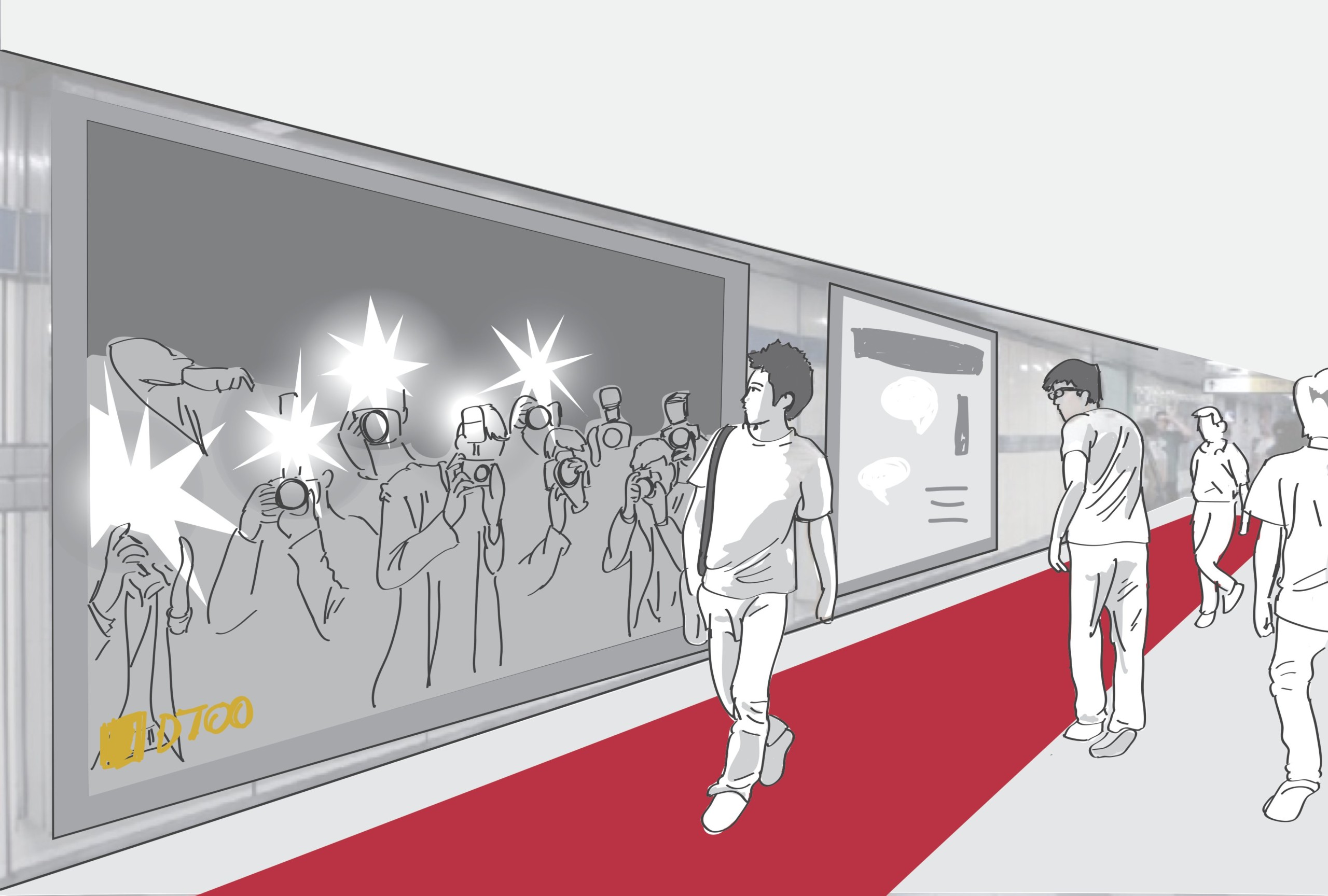 A Nikon billboard at a busy Korean subway station with life-size images of paparazzi, apparently competing for the attention of the passing commuters. When people pass, lights flash to simulate flashing cameras. In front of it, a red carpet leads to the Nikon store
image: David Ledo

Mirrors displaying personalised ads in the restroom, talking windows on a train. Ads are becoming more instrusive, almost verging on evil. New research looks at the developments in 'proxemic interactions'

As you approach the mirror in a public bathroom, sensors in the mirror detect your proximity and that you are looking at it. It greets you by name and an advert tailored to you, based on your browsing history, pops up on the mirror’s surface: Discount Haemorrhoid Cream! Broadcast to the room for all to hear.

“The moment a display starts addressing me by name I’ll be really concerned. a) People around me would know my name, even though I don’t know them, and b) They know what I’m interested in, and I might not want to share,” says Sebastian Boring, Associate Professor at the Human-Centred Computing section of the Department of Computer Science at the University of Copenhagen (UCPH).

With colleagues Saul Greenberg (University of Calgary), Jo Vermeulen (Hasselt University) and Jakub Dostal (University of St. Andrews), Boring has authored an article on the possible negative uses of proxemic interaction – a strategy that allows technological devices to gauge user interest and engagement based on proximity and orientation, and use this as a basis for seamless and natural feeling interaction.

Design technology is starting to make use of these ideas, but the team behind Dark Patterns in Proxemic Interactions: A Critical Perspective are among the first, outside of the world of science fiction, to take a critical look at the possible negative exploitations (dark patterns) of proxemic theory in interactive technology.

Ads in your bones

In the sci-fi film Minority Report, the protagonist John Anderton is bombarded with targeted advertisements, shouting his name for attention as he flees from the authorities through a mall. The film may be set in a dystopian future, but the mechanics behind it are real enough.

“Given that technology gets cheaper and cheaper – a Kinect costs about EUR 150 – we will see these systems very soon, all over the place. Let’s hope that relevant legislation comes quickly. Or that people have morals, which we probably shouldn’t hope for,” says Sebastian Boring.

Morals, no. But being super annoying is bad business. With the invasive nature of pop-ups and -unders, it is no coincidence that so many choose to use apps like AdBlock Plus to stop ads when online: “No company wants to have a bad public image, so they try to be as subtle as possible, but at the same time they want to get their message through,” says Sebastian Boring.

At the extreme end of the scale, BBDO Düsseldorf and Sky GO are as close to objectively evil (or, you know, objectively annoying) as can be: Using high frequency vibrations, they transmit ads to commuters resting their head against the train window. Inaudible to other passengers, the commuter will hear an ad as if it’s a voice in their head, transmitted to their inner ear using bone conduction.

Privacy is also an issue. Fitness First, a health club in Rotterdam, had a bus stop display made that reveals the weight of the commuter waiting for the bus. The club then offers a discount based on the information. Though a novel idea, not everyone will want to have their weight on display in public .

“The question is: how identifiable are we?” says Sebastian Boring. “This is where mobile devices also come into play. If a display can sense my mobile device or look through it, there’s a ton of personal information on it, and it might actually use that. And there’s no real mechanism to switch that off right now from my side, and that’s a problem.”

Data mining, too, as with most online activity, is a potential problem in connection with proxemic interaction. Japanese Design Studio S have designed a vending machine that uses a camera to analyse the customer and offer targeted drinks based on their age and gender. This data is then uploaded to the company’s servers.

This example encompasses quite a few different dark patterns – the user is baited with a display that doesn’t describe what its function is. Once they are close enough, a drinks menu is revealed, and their demographic data and (re)actions are relayed to the servers.

According to Boring et al. in their article “This also raises the spectre of price discrimination (already practiced on some web sites), where an identified demographic may be charged differently depending on their ability to pay.”

Covert data mining is an inherent problem with proxemic interaction, where opting in is implicit: if you are close to the device, you choose to interact with it. It’s simply easier that way for both the user and the device. For this reason, Boring and his co-authors say it’s crucial to define the ownership of any given space that utilises proxemic interaction.

“In public spaces, it becomes a bit more difficult, but it always comes down to who owns the space. This hasn’t been solved by legislation yet. The City Hall Square in Copenhagen, for example. Who owns it? Is it the people of Copenhagen, is it the government, or is it the companies putting up their billboards? It’s really hard to define,” says Boring.

Proxemic interaction is still new and rare enough that there aren’t legislative safeguards in place against the potential dark patterns. So given free rein, how can designers ensure their products aren’t annoying or downright abusive? “One thing that helps a lot is using fun or excitement,” says Boring, and cites the example of the aptly named company Captive Media:

With smoking bans in place most places, people no longer have cigarette remnants to destroy whilst at the urinal. Thankfully, Captive Media have stepped up to the challenge of how keep people entertained at urinals in the post-smoking ban world. Using stream sensors to detect the direction of a pee stream, they have turned urinals into interactive games and penises into multitasking devices.

Captive Media hopes to make a mutually beneficial interactive entertainment system – both for the user and the advertiser, and to this end they have put safeguards in place to ensure that their captive devices aren’t abusive: Though ad-sponsored, the game will take up the majority of the estimated 55 seconds spent at the urinal. And the company suggests that not all urinals in a public toilet be outfitted with their systems – people should have the option to opt out.

“They did it right, and they didn’t need legislation to tell them to do it right. Let’s just hope that most people do,” says Boring.

Of course, proxemic interaction also has its directly positive applications: “A potentially useful thing is for a device to understand the context of a person. Two people watching a film, for example – when they turn to talk to each other, the film could pause or the volume could drop. Or ways of making computers less intrusive in our every day lives – fading into the background when we aren’t using them, and conserving power, too.”

The positive and negative potential of proxemic interaction is only limited by the imagination – the technology is still in its early days, and examples are few and far between. One can just as well imagine a world where advertising and public displays are a more welcome, less invasive thing, as the other way around. In Ubiquitous Computing, also known as ‘Everywhere Computing’, the aim is for a world where anything can interact with everything – an interconnected and integrated digital world.

For more information, check Sebastian Boring’s own website, with examples of imaginative ideas based on proxemic interaction and ubiquitous computing that could make things more colourful and immersive.

(Or use that information for evil and build your very own corpocratic dystopia).